Like all addicts, “Taurus” has its moments of clarity. Midway through writer/director Tim Sutton’s mind-numbingly indulgent character study of an uninteresting rap-rock musician, Cole Taurus (Colson Baker, a.k.a. Machine Gun Kelly) sits down for an on-camera interview. Up to this point, the character has barely been sentient enough to form a full sentence. But once the reporter starts asking him questions, he comes alive, speaking intelligently and articulately about art, fame, and other big ideas. It’s enough to suggest that maybe there is more to this character, and to “Taurus,” than there appears to be on the surface. But the reprieve is brief.

For the majority of this film’s 106-minute running time, Cole has all the charisma of a rag soaked in chloroform. At one point, he sucks nitrous oxide out of a metal canister, then sits with his eyes half-closed and his head flopping on top of his tattooed neck for nearly a full minute before picking up his phone and berating a woman who we soon find out is the mother of his child. We watch him pass out in a pool, on a couch, in the passenger seat of a car, and in the bedroom of an abandoned house he stumbles into while a girlfriend scores drugs across the street. In a flourish that’s very The Slim Shady LP-era Eminem, it turns out that the child who used to sleep there recently murdered his parents, and has a Cole Taurus poster hanging on his bedroom wall.

When he’s not unconscious, or on the verge of it, Cole is snorting coke in the back room of strip clubs, ignoring his young daughter (she seems used to it), and having sex with a woman who comes by late at night on hybrid drug dealing/sex work errands. He’s every rockstar cliché rolled into one, a tortured artist in the Kurt Cobain mold who spends his days desperately chasing oblivion in an attempt to outrun his fame. At times, he gestures towards making music, moments that throw isolated creative sparks like those in the interview scene mentioned above. But we don’t hear a full song until the very end of the film, a choice that does little to make the case for Cole’s genius—and, therefore, the audience’s engagement.

The point that “Taurus” is trying to make—that fame is a prison, and celebrities are prisoners whose souls become public property once they sell enough records—is unlikely to blow the mind of anyone who’s old enough to have a driver’s license. Visually, Kelly does cut a striking silhouette, with his underwear-model good looks, bleached blonde hair, and broken-puppet posture. And Sutton’s camera is infatuated with him, filming him using different types of cameras and under different lighting schemes. But the blank expression remains the same.

The only thing that makes “Taurus” interesting is how uncomfortably real it feels at times. Parts of this film evoke Penelope Spheeris’ seminal 1988 hair-metal doc “The Decline of Western Civilization Part II: The Metal Years,” in that they make rock ‘n’ roll debauchery seem like a flashy band-aid covering bottomless wells of personal pain. You have to know a little bit about Baker/Kelly—namely, that he’s faced similar demons as his character in “Taurus,” and unlike his character, he’s come out the other side—to appreciate his performance, which imitates the flat, zonked-out affect of someone perpetually stoned out of his gourd so realistically that it could easily be mistaken for the real thing. Maddie Hasson also delivers a first-rate performance as Cole’s put-upon assistant Ilana, with whom he has a codependent, sibling-like relationship. (She’s probably too good for this movie, to be completely honest.)

The plot of “Taurus” has uncomfortable parallels to the death by overdose of rapper Mac Miller, whose brother raised an outcry against the film under its original title, “Good News.” The name was then changed to “Taurus,” Baker/Kelly’s real-life astrological sign—a telling indicator of how little thought, and how much navel-gazing, is going on here. “Taurus” isn’t meant to lionize its protagonist. But even in offering a cautionary tale, all it can deliver is shallow provocation and monotonous cliché. 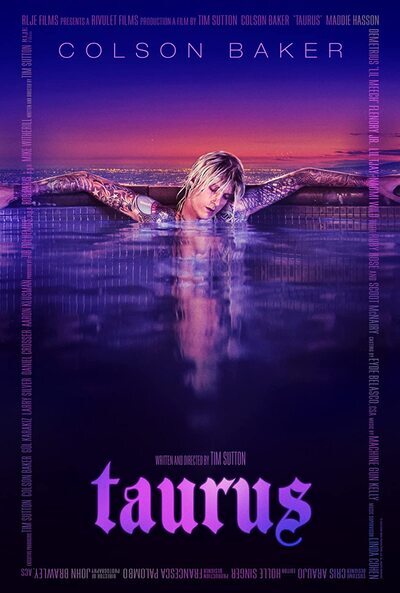