In his 1956 essay “On A Book Entitled Lolita,” Vladimir Nabokov recounts both the imaginative origins of his groundbreaking novel and the difficulty he had finding a publisher for it in the United States. One rejection suggested that Nabokov recast the novel’s action in “short, strong, ‘realistic’ sentences;” Nabokov’s imagined examples still stand as hilarious, sterling examples of what I like to call cornpone cliché: “He acts crazy. We all act crazy, I guess. I guess God acts crazy.”

Funny how some writers, and some audiences, still consider this kind of mush authentic, let alone powerful. It thrives like unmowed kudzu in the dialogue of this aspiring noir written by brothers Paul and Benjamin China and directed by Jamie M. Dagg. Take this bit of diner conversation between Sam, a onetime rodeo champ played by Jon Bernthal, and Elwood (no really), a contract killer played by Christopher Abbott. Take it away Elwood (no really):

“I don’t talk about it much, but I guess there is…”

Whoa. Hold on to that and don’t act too crazy. A little back-story here: at the time of this conversation, nice guy Sam doesn’t yet know that Elwood (no really) is a contract killer. Sam’s “special” woman, Bernadette (Rosemarie DeWitt) is now a widow, because Elwood (no really) killed her husband and two other guys in the movie’s opening scene. Also, “Sweet Virginia” is not a character in this Alaska-set movie; rather, it is the name of the motel Sam owns and runs and presumably named for sentimental reason. As for Elwood (okay I’ll stop), we learn early on that he was hired by another local wife, Lila, who hated her husband and wanted him dead so she could collect his money WITH WHICH, and here’s the rub, she was going to pay Elwood, and then do other things. When she confronts Elwood after the killing, she tells him “You were only supposed to blow the bloody doors off,” I mean, he was only supposed to kill the one guy, and he explains to her how killing three guys made total sense because it made the whole thing look so random. You gotta love these super genius hit men.

And the women who hire them. A little after that, a lawyer says to Lila, “Were you aware of your husband’s financial difficulties” and this wannabe Phyllis Dietrichson’s eyes go all wide and she practically mouths the word “Ooops.”

This is one of those movies concocted by people who’ve seen too many movies; whose experience of violence and crime derives entirely from movies; whose main motivation is derived from some desire to emulate a mode of “cool” that they learned from Coen Brothers and Tarantino movies, and which they think they’ve made less overtly derivative by leavening with ideas from even older movies. Its central performance, by Abbott, is a harrowing, embarrassing adventure in mannerisms. Elwood’s on a short fuse, you see; he drives around town talking to himself, making profane observation about the locals; after one pay phone conversation near a convenience store, Elwood kicks the crap out of some punks who are looking at him funny; with every line reading and twitch of the shoulder you can see Abbott congratulating himself on playing a genuine PSYCHO who’s also complex because of his terse one-sided phone conversations with his terminally ill mother down south of Alaska. Bernthal is somewhat more relaxed as a one-time tough guy just trying to come into his house justified, but, not to put too fine a point on it, so what.

All that said, the movie is well put together, enough so that if you’re not entirely tired of its clichés, it might constitute a tolerable entertainment. I’d rather watch “Double Indemnity” for the 15th time. 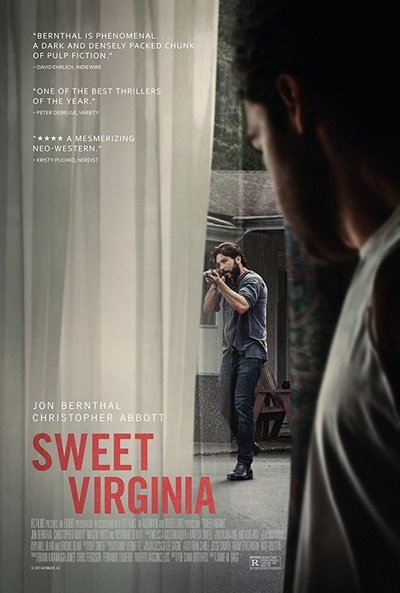 Rated R for violence, some strong sexuality, language, and drug use.

Scott A. McGillivray as Lloyd Stothers