At a sparsely attended 2010 press conference in Montreal, pop star Michel Martelly (aka "Sweet Micky") announced his candidacy for President of Haiti. One of the reporters asked why he would want such a job: "It would be like wanting to be the Captain of the Titanic." Haiti was still in a state of disaster following the 7.0-magnitude earthquake on January 12th of the same year. The country had been roiled by dictatorships, military coups and political chaos for most of the 20th century. But Martelly thought he could provide some hope. And so began one of the strangest, funniest, and most exciting political races in recent history. The story of Martelly's unlikely and rambunctious campaign is the subject of Ben Patterson's entertaining documentary "Sweet Micky for President." This film captures the feeling of that campaign, with constant seesawing between raucous concerts and political pow-wows. It also manages to be an honest portrait of Haiti's challenges and a wary celebration of the mess of the democratic process.

Michel Martelly, now the President of Haiti (no spoiler there), was a gigantic pop star whose onstage shenanigans were a blend of Miley Cyrus, Jim Morrison, Michael Jackson and Madonna. A provocative controversial bald goofball, he wore diapers or mini skirts onstage wiggling his ass, he pulled down his pants and grabbed his crotch. But his sexually explicit onstage persona was a smokescreen for his angry and political lyrics directed towards the National Palace inhabited by one corrupt dictator after another. After the regimes of Francois "Papa Doc" Duvalier, Jean-Claude "Baby Doc" Duvalier, Jean-Bertrand Aristide, and René Préval, with coups in between, the Haiti people were fed up. The Haitian diaspora looked on helplessly. A famous American of Haitian descent, Pras Michel of The Fugees, wanted to do something, so he suggested that "Sweet Micky" throw his hat into the ring.

To put it mildly, Martelly started out with no political platform. Martelly and Pras Michel were just two guys traveling around talking in villages. At one point, Pras Michel, who narrates the film through on-camera interviews, admits, "I realized we didn't have a plan." So they hired a slick campaign manager, and suddenly there was a tour bus, posters, T-shirts. (The campaign manager admits that he had to remind "Sweet Micky" before every event: "This is not a concert. This is a political rally.")

Interspersed with all of this activity are reminders of Haiti's past, starting with the world-changing slave revolution that erupted in 1791 and lasted until 1804. The Haitians drove out the Spanish, drove out the British, drove out Napoleon's France. The post-independence period was fractious, involving emigration, massacres of whites and political turmoil. But Haiti was the first free black nation in the post-colonial era. Using old paintings and photographs, and narrated by Haitian historians and political activists, that timeline emerges clearly and creatively. Stately circling aerial shots of the capital Port-au-Prince, the famous Citadelle Laferrière, the mass grave at Titanyen, the countryside and tent cities act as chapter markers, underscored with jaunty show-bizzy music by Paul Brill. The music gives the film an absurd and humorous tone, even with footage of street violence, rolling tanks, confrontations between the military and the people. Despite that tone, "Sweet Micky" is not cynical or condescending. It's very loving towards Haiti, and presents participation as part of the contract between leader and people. "Sweet Micky" admits (and revels in) the absurdity of a guy who wiggled onstage in a diaper just the year before now circulating at cocktail parties in a suit and elegant spectacles. Martelly speaks of his plans for Haiti (soil cultivation, tourism, wind farms), and those looking on seem to think, "How, though, how will you make all that happen, Sweet Micky?" One Haitian-American says bluntly to the camera, "He cannot run Haiti."

The campaign got even more outrageous when Wyclef, another member of The Fugees, entered the presidential race, causing flurries of alarm and betrayal in Sweet Micky's ranks, especially since Wyclef had larger financial resources. So suddenly Haiti had two famous music stars gunning for the presidency. But other candidates rose: Jude Célestin, son-in-law of René Préval, political veteran Mirlande Manigat whose campaign slogan was "Give Me My Mommy," and then, two days before the election, Aristide himself returned from exile, with crowds erupting into a frenzy of adulation, people screaming into the camera, "My Dad is back! My King is back!" Poll-watchers streamed into Haiti to oversee the voting process, keeping an eye out for fraud and voter intimidation.

The backstage scenes are almost as entertaining as the mayhem of the campaign. There's Pras Michel and Sweet Micky, political newbies, having a whispered tête-à-tête in a hotel conference room. There's Pras Michel making inflammatory comments on a Haitian talk show, threatening that people's heads would be cut off if Sweet Micky lost. Banned from events because of that, Pras Michel is shown sadly looking at his cellphone alone in a hotel room while Sweet Micky bounds onstage in front of thousands. American celebrities get involved. Sean Penn, whose work in Haiti following the earthquake has been admirable, comes off as a red-faced blowhard, stating pompously at a Hollywood event, "As an NGO leader, it is not my place to interfere with elections ..." He then proceeds to interfere with the election. Campaign meetings are held at B.B. King's nightclub. Wyclef, in a huge fur coat, joins Sweet Micky in a stretch limo to hammer out a compromise.

If political engagement and hope still matters (and it does) then there is something extremely touching, really, about all of this. Political naiveté can be dangerous. John Lennon's "Imagine" is potentially terrifying if one "imagines" it put into practice. But political naiveté can also be beautiful. Cracks in the edifice of established power allow for new ideas, energy, a fresh start. Sweet Micky knew what he represented to the people and positioned himself as the candidate for change. "Sweet Micky for President" shows Martelly's steep learning-curve about political realities as well as his growing sense of confidence and commitment. It's inspiring.

Similar to Camilla Nielsson' new documentary "Democrats" that shows two political rivals in Zimbabwe coming together to create a constitution under the shadow of long-time leader Robert Mugabe, "Sweet Micky for President" shows the fragile and sometimes-tentative steps towards democracy in an exhausted angry nation where people have had enough of the corrupt tyrannical old guard.

Why not a guy who spent the majority of his life gyrating onstage in a diaper as President? Why not indeed? 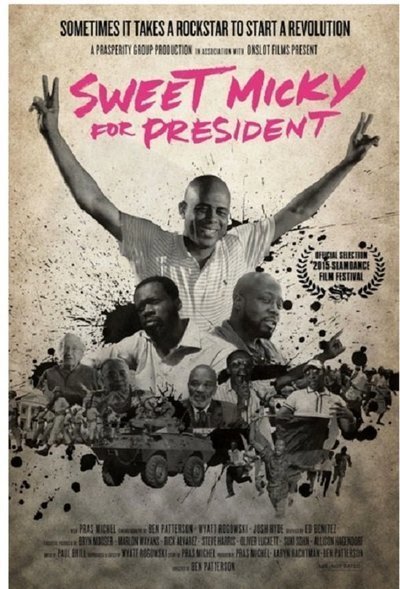