"Super Troopers 2" is, despite some bright spots, a self-conscious, and painfully unfunny return to stoner comedy team Broken Lizard's most successful film. This bloated, unfocused follow-up—which was tellingly crowd-funded by fans and then released by Fox Searchlight—takes all of the charming goofiness of the first film, and runs it deep into the ground with gags that either over- or under-think these stock characters' original appeal.

Now inexplicably set in Southern Canada, "Super Troopers 2" makes the first film's breezy frat-guy humor look as tight and classically structured as the work of Abbott and Costello and the Marx brothers. Think of "Super Troopers 2" as one of the later films of those earlier comedians: full of ill-timed routines, winking fan service, and a palpable air of desperation that Broken Lizard fans will notice had previously started to creep into their joint comedies soon after "Super Troopers," especially in middling-to-bad efforts like "The Slammin' Salmon" and "Beerfest."

"Super Troopers 2" begins appropriately with a dream of death: Rabbit (Erik Stolhanske), formerly the rookie of the group, fantasizes that he and his buddy cop friends—a group of now inexplicably disgraced Vermont state troopers—are rock stars, and their tour bus has just plummeted off the road and into a lake-side ditch. This is a recurring nightmare for Rabbit, but he doesn't say anything about it after this introductory sequence. Instead, the film launches into a shambling rehash of the original film's boilerplate, but satisfying plot: two teams of cops—Broken Lizard's newly reinstated State Troopers and a trio of Canadian Mounties who can't stop saying "sorey" and "aboot" and such—compete to see who can bust up a mysterious local drug and gun smuggling ring. You don't have to have seen "Super Troopers" to know who the real culprit is, especially since he's got a dopey "What me worry" smile on his face throughout the film.

Still, it would have been nice if this lazy rehash of the first film's plot, power dynamics, and punchlines weren't so cluttered. The Broken Lizard guys still have way more focus than Judd Apatow's improv-crazy stable, but in "Super Troopers 2," they continue to slowly creep towards Apatow-ian excess. There are several re-heated gags that simply do not land and are seemingly only in the film so that Broken Lizard fans will get exactly what they want (and in the proportions they want it in), like callbacks to some of the first film's better routines: the bear sexcapade, the "meow"-happy stop-over, the liter of cola stand-off, and so on. Many of these gags call attention to themselves without adding anything noteworthy, as if Broken Lizard are too reluctant to commit to their old material, but also too savvy to completely ignore the harsh truth that they are, for many fans, defined by these bits. Bigger is often confused for better, so the bear is now real, the stop-over concludes with a car theft, and the liter of cola has multiplied by ten.

There are some successful new routines that are similar to these old jokes, like a new addition to this film's stop-over montage: Thorny and Mac (Steve Lemme) pull over two American tourists and cheerily spew obscenities while pretending to be French-language speakers with a comically limited grasp of English. I won't spoil the dirty phrase that they boisterously repeat, but it's fun to watch them toss these dirty words around like a filthy volleyball. Here's the Broken Lizard that fans know and love. What took you guys so long, we missed you!

Unfortunately, the laid-back camaraderie of the first film is generally missing from "Super Troopers 2." The first film's romantic sub-plot—between Paul Soter's Zeppo-like Foster and Marissa Coughlan's bubbly lover Ursula—have been replaced with a mis-matched pairing of clumsy Rabbit and sultry Canadian liaison Genevieve (Emmanuelle Chriqui). Sparks not only do not fly, but this new couple—a relationship built on a double-cross that can be seen from a mile away—only makes you wish you were watching Broken Lizard's earlier (and easily best) film. Remember when Coughlan seemed to be so taken with Soter that she often smiled before matchin him quip for quip? And remember how, when he smiled back, he added a shy, boyish quality to his most knowingly dumb come-on lines?

"Super Troopers 2" leaves viewers with a lot of dissatisfying questions, like do we really need so many scenes with Farva, Kevin Heffernan's obnoxious fan favorite bully, and couldn't they have focused on giving character actor god Brian Cox—who is hilarious as the group's Margaret Dumont-like school marm boss in "Super Troopers"—better material instead of just more lines? This sequel isn't just more of the same from Broken Lizard—it's a lot more, and for no good reason. 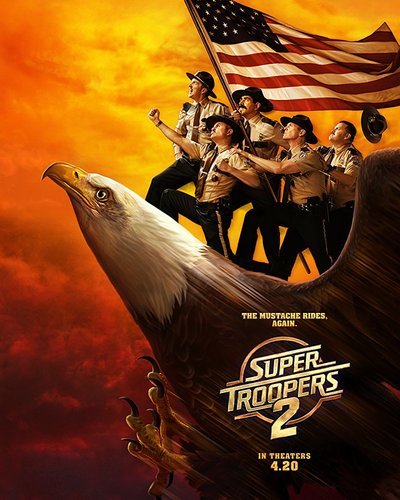 Rated R or crude sexual content and language throughout, drug material and some graphic nudity.