“Sublet” has a lot of things going for it, including good performances, some interesting insights, and a presentation of Tel Aviv that's so enchanting it may inspire many viewers to consult travel agencies. And yet, when it was over, I came away from "Sublet" curiously unmoved by it all. It isn’t bad, per se, but I just never felt the emotional impact it's clearly hoping to achieve.

As the film opens, middle-aged travel writer Michael (John Benjamin Hickey) is arriving in Tel Aviv to spend a week doing research for an article. For his lodgings, he renting out an apartment but when he arrives, he discovers that the guy who lives there, a young film student named Tomar (Niv Nissim) has screwed up the dates and thought that Michael wasn’t arriving until the next day. Michael’s initial instinct is to leave and check into a hotel (probably right after he noticed the poster for the “Funny Games” remake hanging in the bedroom) but Tomar, who frankly admits that he needs the money, convinces him to stay. Since Tomar now has nowhere to go, Michael offers to let him stay in exchange for serving as a tour guide to show him the less touristy sights.

Over the course of the five days covered in the film, Tomar shows Michael around and while doing so, the two get to know each other. On the surface, they couldn't possibly be more different. Michael is quiet and retiring, dutifully calls his husband back home every night, and clearly has something weighing on his mind that cannot simply be explained away by the jet lag. Tomar, on the other hand, is a brash hedonist who seems to have nothing on his mind but the pleasures of the moment (at one point cruising online to order up a partner for sex with all the energy of ordering a pizza). He's also unwilling to consider or contemplate those in the gay movement who came before him, like Michael, and paved the way for his current lifestyle. Over time, a friendship develops, as well as a possible sexual attraction. At first, Michael isn’t certain if Tomar is even gay or not (though the poster for the particular “Nightmare on Elm Street” sequel hanging in the apartment should have been a clue) but it probably will not come as a surprise to most viewers that something does eventually arise, although they may be surprised by the degree that sock puppetry is involved.

The scenes between the two men from different generations looking to find some kind of common ground are easily the most interesting in the film. One of the best moments is when Michael and Tomar discuss their very different attitudes towards AIDS and its enduring legacy—having lived, loved, and lost during that era (even writing his only novel about that period), Michael is dumbfounded with Tomar’s overly complacent attitude and belief that any talk about AIDS is just too depressing. In a later scene, Michael is even more baffled when a dancer friend of Tomar’s comes by and announces that rather than try to stick it out as an artist in Tel Aviv, she is going to relocate to Berlin for an easer go at it. These moments are smart and provocative, and if director/co-writer Eytan Fox had stuck more to them, "Sublet" could have been a really fascinating generational drama.

Instead, the romantic angle slowly takes over in the second half, and that is the part that didn’t work for me for one simple reason—I never for a moment believed in any sort of real attraction between Michael and Tomar. Simple lust, perhaps, but not the kind of powerful mutual attraction that could spring the older man from his existential funk (one that is entirely deserved, once we hear of the sad events still troubling him) and make the younger one more aware that there's a great big world out there that doesn’t evolve entirely around his selfish needs. Well, not within five days, at least.

This, I hasten to add, is not the fault of Hickey or Nissim, both of whom are quite good in their parts and play off of each other nicely in a number of scenes. There are other aspects of “Sublet” that I did like as well—it looks ravishing, it moves at a relaxed and unhurried pace, and it contains any number of very good moments here and there. (In one of its best scenes, Tomar, who has already bragged about how he wants to challenge and provoke audiences with his work, shows one of his films to Michael and it appears to be little more than a soft-core ripoff of the less-than-immortal “The Alligator People.”) In the end, though, it just never quite clicked for me in the way that it was clearly supposed to do. I can’t quite recommend "Sublet," but, at the same time, I wouldn’t want to dissuade you from seeing it if it has piqued your interest in any way.

Now playing in theaters and available on demand on July 9. 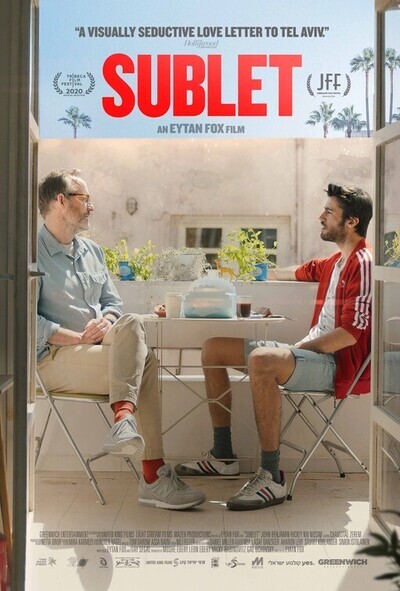