More money has been lost by people trying to imitate "Rocky" than was ever made by the original picture.

- Irwin Winkler, producer of "Rocky" And the problem is, they don't really need to imitate "Rocky," not when they have an original idea of their own. "Streets of Gold" is a movie that begins with a story that's genuinely interesting. But then it gradually loses confidence and starts to depend on cliches, and by the last 20 minutes it's on automatic pilot. Too bad, because this could have been a good one.

The movie stars Klaus Maria Brandauer, the Oscar winner from "Out Of Africa," as an alcoholic former boxing champion from Russia, a Jew who was the greatest Soviet fighter of his generation but who wasn't allowed to fight outside Russia because of his religion. Now we meet him 10 years later, stumbling through the gutters of Brooklyn, washing dishes in a restaurant, spending his paycheck on beer.

One night, half drunk, he goes to a local boxing club and sees a black kid fighting a white kid. Both fighters look promising. Outside the club, he has words with the black kid and taunts him, daring him to try to hit him. And even though the Russian is now slow and middle-aged, he's nimble enough to win his bet.

This new contact with the world of boxing is the tonic Brandauer needs; it's his road to redemption. He agrees to coach the white kid (Adrian Pasdar), and before long, he has even made peace with the black fighter (Wesley Snipes) and has both fighters under his wing. The young boxers don't like each other, and he incorporates their dislike into his training, pitting them against each other, using their anger as a prod.

The Russian is happy for the first time in months, maybe years.

Even his personal life has improved. The woman who owns his boarding house (Angela Molina) has been turning down his advances, but one night she is waiting in his room, and when he asks her why, she says, "You've changed." It is a wonderful moment, and if the movie had gone ahead to be about his changes, about the way he puts his life back together again, we could have followed Brandauer's character through from beginning to end and probably had a good movie on our hands.

Unfortunately, it's just at this moment that the movie abandons its confidence in its original inspiration and turns into yet another clone of what I like to call the CLIDVIC formula - the Climb from Despair to Victory. The movie now becomes the story of the two young fighters and their approaching showdown with a visiting Russian team - a team that inevitably includes some of the very people whose anti-Semitism halted Brandauer's career. Can we guess who will win the big fight? Are there stars in the sky? First, though, there's a little structural problem. So far we have two heroes - one white, one black - but only one big fight scene to end the movie. So, of course, the black kid has to be eliminated somehow.

He's supplied with a street fight that conveniently injures him too badly to compete so that he can sit on the sidelines and cheer for the hero. (Did the filmmakers see the irony? It's just as impossible for a Hollywood film to end with the black kid winning the fight as it is for the Russians to field a Jewish champion.) The last 20 minutes are the obligatory fight scene. I sat in the theater and predicted what would happen: The first round looks bad for our guy. In the second round, he gets clobbered. In the third round, he knows that the only way for him to win is by a knockout. No prizes if you correctly guess what happens.

Meanwhile, what about the Brandauer character? He's still onscreen, of course, cheering for the kid he trained and thirsting for revenge against his Russian enemies. But what's going on inside? What about his drinking? How does he feel, now that he no longer sleeps it off on the beach? Did anything important happen between Brandauer and his landlady, or was her total capitulation the whole point of their relationship? Sometimes I think there are only two kinds of serious movies: those about what people are, and those about what people do. "Streets of Gold" starts out to make a statement about the kind of person this Russian emigre was, and it ends up using him as the backdrop for a tired Hollywood formula.

Are audiences supposed to be that stupid, that they care more about who wins the fight than about the weathers of a man's soul? 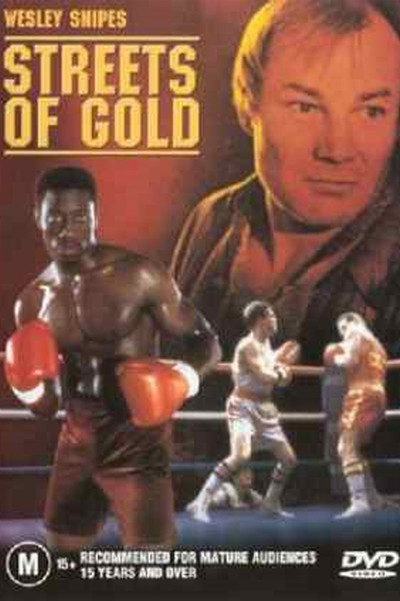