This movie opens with a bunch of texts extolling the badassery of the “Special Boat Service,” a branch of Britain’s Royal Navy. The text has a certain needling quality; were it to have wound up saying “Trust us, it’s really badass,” I wouldn’t be a bit surprised. We see the problem here. Unlike “Navy SEALS,” which has an intriguing ring to it right off the bat, “Special Boat Service” sounds like something you’d call if you need a particularly swanky water taxi.

“Stratton,” then, is titled for a particularly badass member of Special Boat Service. It is based on a book by Duncan Falconer, which yes, is a pen name, apparently, for a person who was once in the Special Boat Service and has written one non-fiction book about it and a bunch of Stratton novels about it. This movie is directed by Simon West, who as many people are fond of recalling, also directed “Con Air,” the 1997 action thriller that has accrued something resembling classic status over the past two decades. Apparently “Con Air” is enough to get some people’s hopes up every time a new film directed by Simon West comes around. This wannabe franchise opener does not fulfill any hope, however.

After explaining Special Boat Service, the movie chronicles Dominic Cooper’s Stratton on a mission in the Persian Gulf, particularly Iran’s Strait of Hormuz. The bearded operative is joined by American partner Marty, stealthily raiding a chemical weapons plant while their remote support team keeps track of them. I don’t watch the television series “Scorpion” regularly, honest I don’t, but this opener feels like an episode of that show with the “wacky” characters excised. That is, a tense woman in front of a computer (Gemma Chan) instructs Stratton and Marty as the “tension” mounts and the inevitable cry of “We have no choice! Just send in the chopper!” is sounded.

Back home on his lonesome, Stratton licks his wounds on his houseboat, from which his now ex-girlfriend has disembarked. No worries: he has an eccentric hard-drinking neighbor (Derek Jacobi) on a neighboring boat. I think these guys are standard issue for British intelligence agents. Back at the office, Stratton reports to female boss Sumner, whose authority is immediately undercut for the viewer on account of her being portrayed on an elliptical exercise machine when Stratton walks in. There’s all sorts of bad news. The guy who led an armed attack on Stratton and the now-absent Marty is a long-thought-dead Russian operative with whom Sumner (poor Connie Nielsen) was once romantically involved. Also, there’s a mole in the SBS offices, whose identity you’ll guess as soon as the actor who plays him walks into a frame. And there’s a terrorist attack in the offing. Target: they don’t know yet. Oh, wait, a little while later they find out. Oh, no. It’s London.

This really is a paint-by-numbers action movie with two good things going for it. Those are brevity—it’s only 93 minutes long—and immediate forgetability. This latter quality, I allow, is only considered good by a certain class of people, those who feel overly beleaguered. Given that this is a movie reaching our screens in a time when people are just plain tired, and perhaps dreading the travails of the year ahead, an aggressively unimposing movie such as this might not be the worst time-waster. But it’s still a time-waster. 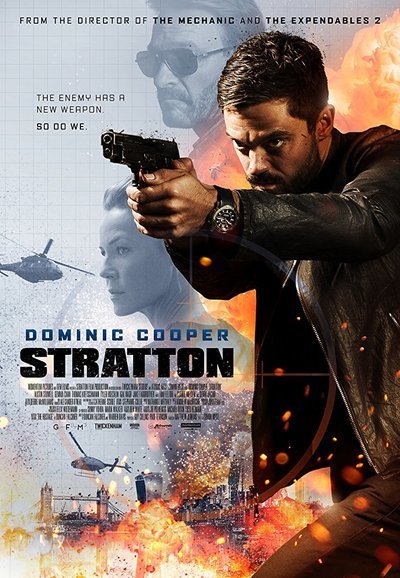