Lilka Elbaum grew up in a small apartment overlooking a courtyard in Lodz, Poland. One Jewish family among many who resettled in the city after World War II, the Elbaums abruptly left their home when she was 19 years old. In 1968, anti-semitic rhetoric in Poland was on the rise; violence seemed imminent and leaving the country seemed like the safest option. Decades later, Elbaum returns to recover memories. Central to her recollections is a still-life painting that hung on the wall, a painting that was as much a part of the space as the lightly floral wallpaper and panel-wood floors.

In “Still Life in Lodz,” Elbaum becomes our guide. Joined by Paul Celler, a second-generation Holocaust survivor, and Roni Ben Ari, an Israeli artist working on a project to explore pre-war life in Lodz, the three subjects are all drawn to the same neighborhood. Through discussions and archival explorations, they attempt to recover histories from their past. Director Sławomir Grünberg blends interviews, animation, and archival images to create a portrait of lives interrupted and cut short.

As a personal archive of disparate experiences and an exploration of how cities erase evidence of shameful pasts, “Still in Life in Lodz” resonates. Elbaum, Celler, and Ben-Ari share their most intimate histories as a means of finding a more profound sense of self by connecting with lost family members and fading communities. Spaces and objects take on added significance, often the only remnants of the past as family legacies were willfully destroyed by hatred and policy. Recovering the painting and what it means, however, does little to soften that pain. Structurally, the film purposefully avoids a treasure hunt structure. The painting is a bit of a MacGuffin, intended to drive the plot and sow a deeper sense of unresolved pain and trauma.

The film works best when it deconstructs the changing face of Lodz. Through photos and archival footage, we witness over a century of change in Poland’s third-largest city. Notably, during the war, the Nazis established Poland’s second-largest Jewish ghetto. Many of the Jews interned in this camp were condemned to the death camps. In a feat of bizarre architectural violence, the ghetto crossed over a major city street. A rickety bridge crossed over the path of a street-car lane—but the remnants of the ghetto were long eliminated from the fabric of the city. For the survivors and their kin, this progress often feels more like erasure. As trauma echoes through a family, it seems impossible to get past painful origins. As the rest of the world moves on, they are trapped in an incomplete historical memory.

Unfortunately, many of the most compelling elements of “Still Life in Lodz” are bogged down by distracting filmmaking flourishes. The vintage filters overlaid on images, videos, and even the animation add unnecessary movement and, in some cases, obscure images. The aggressively-applied Ken Burns belies the need for stillness and reflection. The jarring soundscape used on what seems to be silent archival footage feels out of balance with the images. The cloying romantic soundtrack too loud and unwelcome intimates a hollow emotional journey. These elements deflect from the loss at the center of the story.

As with most films about genocide, the filmmakers came across the problem of depicting an absence. In turn, they filled up moments of silence and stillness with the presence of cinematic gimmicks and sounds. The impulse to fill the space has an air of desperation; to leave the quiet and empty would mean to feel the full scope of what is lost and what will never be recovered. Grünberg’s filmmaking suffers from too much empathy for his subjects. Through his film, he seeks to heal and recuperate them. It’s a noble cause with a jarring and unsatisfying result.

“Still Life in Lodz” begins as a film about a painting, a still life that overlooked a small room occupied by a Jewish family forced to abandon their home. As it expands, it becomes the portrait of many families and a whole community displaced and erased. The painting remains a silent and uncooperative witness to history. For Lilka Elbaum, it represents the lost promise of destiny unfulfilled. It’s a false and menacing representation of a home life that will never be pieced back together. 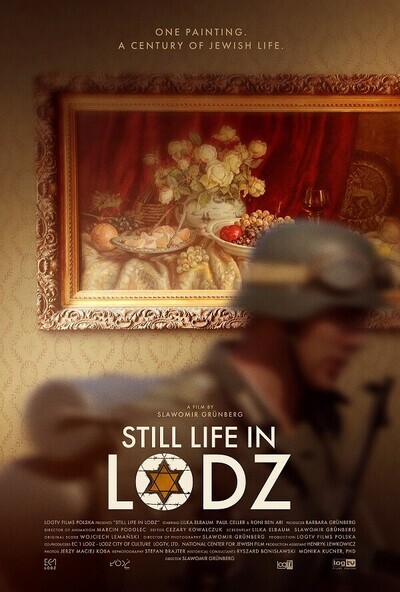 Lilka Elbaum as Herself

Paul Celler as Himself

Roni Ben Ari as Herself