Memories of summer camp generally fall into two categories: fun in the sun, and pranks played on you. If it's the latter, at least as I remember it, if it's not short-sheeting it can be something more malevolent. "Standing Up," the film adaptation of a popular "young adult" novel of the 1980s, "The Goats" by Brock Cole, focuses on some of the meaner parts of kids' treatment of kids. This can include hazing, and the enforced ritual of survival tests.

"Standing Up" begins with a chilling, darkly shot scene of canoes paddling away at night. It's not long before we find out that the swift surety of their strokes indicates a clearly defined, nasty task: To strip Howie (Chandler Canterbury) buck naked and leave him on an island near their camp all night long.

He is one of the "goats"—selected victims of the annual camp ritual. The other is Grace, played by Annaliese Basso, hiding out in teeth-chattering terror in a cabin on the island. Painfully shy, her humiliation at the hands of some girl campers who simply don't like her has made her his counterpart. After she lets Howie into the cabin, she cowers under a blanket. She will kill Howie if he looks (and he doesn't).

"Standing Up" uses Grace's point of view as a framework, but after the two pair up, it becomes a partnership which turns the tables on the perpetrators. A mild-mannered adventure story of three days duration is the result.

Even before this ritual humiliation, Howie and Grace see themselves as outcasts already, nerds in the making. We learn that Grace has already called home to ask to leave camp early. But Mom (played by Radha Mitchell) is an '80s professional woman who believes in tough love and sticking it out. She insists that Grace wait it out a few days before she will come to get her.

Howie is a bit more of a survivor, and we find out much later in the film why. He talks Grace into not passively waiting out the night. Instead, he navigates an escape as the two cling to a tree branch and swim away. They blend into a bus group going to another camp, but a more benevolent one, mainly filled with African-American kids. Grace learns to trust other teen girls again; Deidra Shores plays a new-found friend. Grace also escapes from unwanted attention by an overly aggressive dance partner whom Howie successfully fends off, a mini-offshoot of the bullying theme.

The dance sequence also provides a comic bit as Howie gets overtaken by a young African-American woman slightly bigger than him. Picking him as a dance partner—and her summer crush—she overwhelms in on the dance floor, even rubbing his head in a near-maternal way during their pas de deux. He's game.

"Standing Up" is mainly an exercise in personality development for Grace, raising her self-esteem, and giving her confidence. She finds she can con a hot dog stand owner and divert him while Howie steals some clothes. Her newfound charm and schmoozing skills get a work-out as the twosome cop a night in motel. She convinces departing visitors that she is a cleaning person and gets the key to their room. Grace, clearly from a bit more of an elevated class than Howie, is at home in the relative luxury of sleeping in clean sheets, and looks good in a turban made of towels after a welcome shower. In this moment, it seems things might get a little erotic, but they don't. This is a movie made for kids, and family values are upheld. Grace and Howie, for instance, fully intend to repay some stolen cash.

By now, the camp counselors and officials have been alerted and go on the hunt for the kids. This leads to a brief discussion of stripping and victimizing: it's just a tradition of the camp and a character builder, says the guy counselor, though the female counselor looks askance.

It's good to air these issues, even in a kind of pro forma "taking sides" way, and even if you never really worry that the two will survive. You might wonder at the coincidence of releasing a film at a time when we have become very aware of teen suicides due to bullying. The recent documentary "Bully" by Lee Hirsch has brought this home.

"Standing Up" is mildly entertaining. Basso picks up steam as the movie moves ahead, but for the first third or so she seems to display only whininess. Even given that this is set thirty years ago, it's a pretty passive stance, and a bit too one-note. Another jarring oddity is the twosome's run-in with a sheriff's deputy who is just too scruffy and weird, a part taken by Val Kilmer.

Yet bully for Howie and Grace that they didn't buckle under. We are definitely on their side as they stand up to their enemies, even if it's only by spoiling their trick. 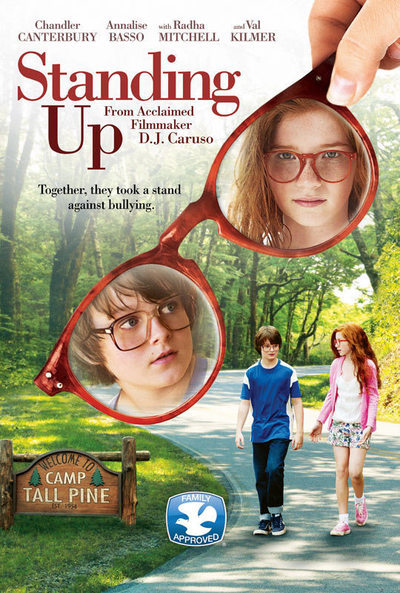