I've always thought that the best—that is, the most uncannily engrossing and upsetting—war movies have been those made by the Russians. Elem Klimov's 1985 "Come And See," Andrei Tarkovsky's 1962 "Ivan's Childhood," Alexei German's 1971 "Trial on the Road," to name but three, all unforgettable, harrowing visions. To take the German picture as an example, it's the direct deployment of simple elements—intractable snow, uncooperative vehicles, poorly-rolled cigarettes, the sound of a bullet whirring past the ear—that evokes a simultaneous sensation of lose-the-will-to-live tedium and soil-yourself fear in a way that even the most conscientious and crafty of American-made war movies can't touch.

So it's slightly peculiar to me that "Stalingrad," the new movie directed by Fedor Bondarchuk (the son of the great Russian classicist director Sergei Bondarchuk, and the half-brother of actress Natalya Bondarchuk, who starred in Tarkovsky's 1972 "Solaris"), aspires in some ways to the conditions of an American war movie, or just an American movie period. It's shot in not just an iteration of IMAX but in IMAX 3D. It features a deft but unquestionably sentimental musical score from Angelo Badalamenti, a Hollywood veteran. It begins with a present-day frame story, just as Spielberg's "Saving Private Ryan" did. And so on. It's a mixed bag overall—hence my star rating—but it's worth seeing nonetheless, largely because of the explicitly Russian qualities its sustains.

The movie's actual story line—which the present-day narrator, a Russian relief worker telling his life story to a group of German children trapped under building wreckage in the wake of a tsunami in Japan (those who have some background in Russia's foreign relations will not find this narrative convolution completely gratuitous), frames as an explanation of how he can claim five fathers—is adapted from a section of Vasily Grossman's epic novel "Life And Fate." In that novel, a small cadre of Russian soldiers defends an apartment building in the title city against surrounding German troops. It's an impossible situation and, for Bondarchuk and his screenwriters Sergey Snezhkin and Ilya Tilkin, an irresistible metaphor, even though, by sticking to it, the filmmakers don't actually show the battle that most World War II buffs associate with the word "Stalingrad."

Which isn't to say the movie isn't action-packed. The opening scene depicts dozens of soldiers conducting a charge while literally on fire. A subsequent scene, in which a plucky band of Russian soldiers tries to halt a German-ordered atrocity, is a tour-de-force of against-all-odds battle brinksmanship. And the movie practically swims in bombed-out atmosphere. The ruined splendor of the apartment building the Russian solders inhabit is masterfully depicted, and the peeling paint and lonely, detuned-by-bombings pianos look even more desolate in IMAX 3D. However, the characters are not particularly impressive as either individuals or types (although Pyotr Fyodorov, as the Russian captain holding a motley crew together, has a pleasing Colin-Farrellesque look and vibe to him), especially as they've clearly been tailored to reflect ostensible aspects of some kind of national character. In the meantime, the Germans are as beastly as Germans get in these movies; the most "sympathetic" is played by Thomas Kretschmann, whose character has the nerve to complain to a woman he's just raped that the war has turned him into a "beast." Uh-huh. (The movie's sexual politics are pretty whack across the board, beginning with the way the rape scene gets underway with a slow-motion snapping of the victim's garters.)

For its many limitations, the movie never goes slack as a visual spectacle, and given that it's the biggest home-grown box-office hit Russia has seen in many a decade, I'd recommend it just for the window it provides into popular entertainment on the other side of the world. And in the marrow of that visual spectacle is, I think, some of the real stuff that makes Russian war movies so convincing. 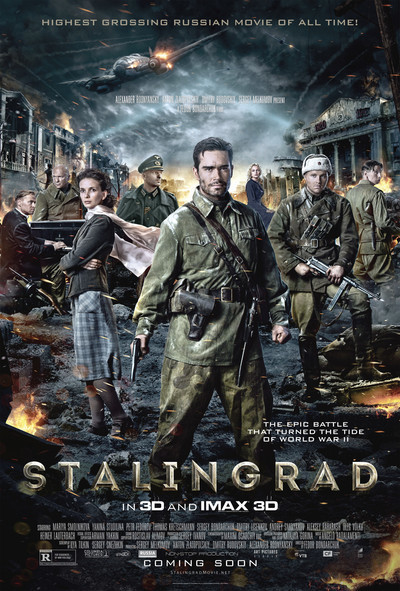