Thom Fitzgerald’s “Stage Mother” is a sweet but ineffective comedy that cashes in on drag culture’s new mainstream fame. While the movie brings up a handful of important topics, the way it handles issues like drug addiction and physical abuse ultimately feel superficial and hollow. Fortunately, a few sparkling performances salvage the show from becoming too maudlin.

Unfortunately, “Stage Mother” begins with the tragic death of a drag queen on-stage at a struggling Castro District bar called Pandora’s Box. Eventually, the news of Rickey’s (Eldon Thiele) overdose death reaches his estranged Baptist parents, Maybelline (Jacki Weaver) and Jeb (Hugh Thompson), in their little Texas town of Red Vine. Overcome with grief, his mother boards a plane for San Francisco, meeting her son’s partner Nathan (Adrian Grenier) and best friend Sienna (Lucy Liu) for the first time and learns that Rickey’s bar has now passed on to her. Instead of selling the place like her husband wants, Maybelline decides to keep the bar alive in memory of her son by turning a trio of drag performers into bona fide singers.

Even with added drama from Sienna’s abusive date and another drag performer, Joan (Allister MacDonald), struggling with addiction, Brad Hennig’s script is predictable. For the most part, these are not characters but templates, a hodgepodge of adjectives that represent the idea of a person but never quite feeling like someone you would meet. Outside of Maybelline’s unsurprising “normie mom learns to accept the fabulous gays” arc, Nathan is perhaps the next biggest character, and sadly, he’s only got two moods: resentful or supportive. Grenier spends so much time being angry, it feels like an overdrawn temper tantrum. Another major part of the story is Sienna, a blunt-smoking-while-pushing-the-baby stroller mom who looks more like a bad comedian’s punchline about San Francisco. Eventually, we’re supposed to care for her character because she finds herself in trouble, but even that feels judgmental, as if it were punishment for being a single mom trying to date. If main characters like Nathan and Sienna feel empty, then what hope do performers like Cherry (Mya Taylor) and Tequila (Oscar Moreno) have? Even when unexpected characters arrive, like the charming hotel concierge August (Anthony Skordi) who befriends Maybelline, there’s a sense of where this story’s going, and it’s hardly ever a surprise.

To their credit, most of the actors do what they can with what they’ve been given. Weaver adapts her tough mama person to a level of Baptist nice who winces when someone curses but isn’t afraid to wield a gun when necessary. Skordi isn’t as convincing as a former hippie turned head concierge, but he sells the charming bit as well as he can. The trio of performers—Joan, Tequila and Cherry—may not make the best singers, but they work well together. Moreno and MacDonald share the spotlight at different times as the most out-going queens, and Taylor plays the shiest one of the three. As Cherry, she’s much more soft-spoken but also dealing with her own set of problems as a trans woman, and she brings a world of patience to all of the blow ups around her. Although Grenier’s angry performance feels more petulant than nuanced, Liu seems to have fun playing her irresponsible character, making herself look as messy and weary as she possibly can.

However sweet the story is, Fitzgerald never makes “Stage Mother” into something memorable. The cinematography is merely serviceable and the stock footage-like sweeps of the city feel terribly canned, like a TV show made on the cheap. Honestly, the movie's premise is a bit of a bummer in it of itself. It takes a God-fearing straight white woman to help a group of queer men and women get their groove back after a traumatic loss, and I’m not sure that storyline is as progressive as it wanted to be. 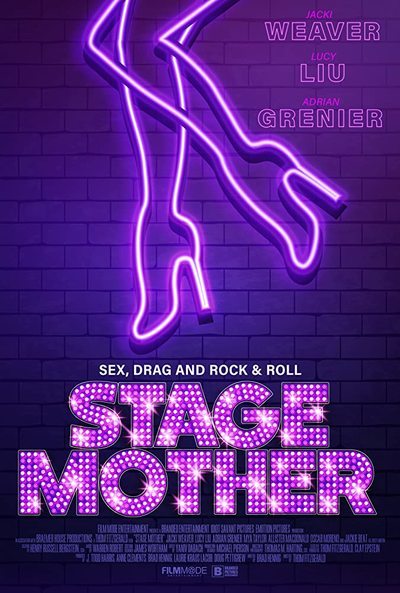 Rated R for sexual content including an assault, language and some drug use.