The queer-themed horror movie “Spiral” begins with a sympathetic provocation: a couple neck quietly, but passionately in their car at a remote, and otherwise deserted restaurant called Angel’s Drive-In. A pair of floodlight-strength headlights turn on them, and confirm for us that the two lovers are both men. Violence soon follows, but at a different time and place: married couple Malik and Aaron (Jeffrey Bowyer-Chapman and Ari Cohen) are greeted with a brick to their car’s windshield seconds after they enter a small exurban town that may or may not be haunted by pseudo-Christian cultists.

These jarring prefatory scenes are striking given the relatively timid movie that follows: Malik, being swishier than Aaron, proceeds to lose his mind with worry as his partner and step-daughter Kayla (Jennifer Laporte) struggle to assimilate into a town that obviously isn’t comfortable with “any of you,” as one smiling, gift-bearing neighbor puts it. Unfortunately, there are some taboos that the creators of “Spiral” are either too shy or too cautious to get into, and it shows in the way that they repeatedly suggest, but only once show characters saying (or reading) the word “faggot.” This movie is progressive intentionally, but not formally, and the difference between its creators’ themes and consideration is unfortunately glaring.

I wouldn’t be so hung on the movie’s teasing use of an admittedly foul slur if it wasn’t, in one scene, spray-painted on an interior wall of Malik and Aaron’s isolated (but spacious) country home. This act of vandalism precipitates Malik’s psychological breakdown, which makes him question the slogan-friendly advice that he gives to Kayla: “choosing to live your life loud and proud is about the bravest thing in this world.”

Some canned incidents follow, including a couple of mildly kitschy encounters with a leering older neighbor and his gaunt (and unexpectedly handsy) grandson. In this light, Malik’s terror appears to be either a result of self-destructive projection or canny observation. Neither option is especially gratifying given how tacky and under-developed Malik’s home life is. He spends most of his time either ghost-writing a book about and for an apparently unsavory public speaker—some old white guy who wears horned-rim glasses and talks slowly about "upholding values" like the "traditional family unit," which is "everything”—or playfully sparring with Kayla, who has unwisely fallen for local boy Tyler (Ty Wood) without first having dumped her existing (but absent) boyfriend. Malik’s happier, more out-spoken days are shown to be behind him, as in the scrapbook photos that he shares with Kayla, including a photo of Malik with her father when they were both younger (ie: Aaron is in drag and Malik is smiling). But it’s hard to care about what’s bugging Malik given that even he doesn’t seem to care about his problems: he only looks up the subject of his hagiography several scenes after he starts writing it.

As for that word: Malik and Aaron almost say it a couple of times, but it isn’t explicitly shown (let alone said) until much later in “Spiral.” By this time, Malik’s struggle has become an inevitable clash with a group of bigots that we all presumably know without really knowing, since we can guess their motives based on their obvious behavior. That sounds true enough to life when you think about it in the abstract, but there isn’t much to Malik’s story given that it’s mostly presented through his subjective experiences, but also sometimes criss-crosses with Kayla’s doomed romantic sub-plot, and rarely includes Aaron after a few establishing scenes.

It’s hard to know what to think, let alone feel, when we see Bowyer-Chapman’s character examining a mysterious post-it note as overwrought voiceover narration reminds us of a warning that Malik just received (mere seconds ago) from a hammy-creepy neighbor: “Don’t ... tell ... anyone ...” This flash of unexpectedly campy humor seems to hail from another movie entirely.

“Spiral” often appears to be a dark, knowing genre retread—a topically urgent mash-up of “The Amityville Horror” and “Rosemary’s Baby”—one whose emotional impact only ostensibly stems from both its drama and its antagonists’ familiarity. But as a reflection of Malik’s tortured headspace, “Spiral” is underwhelming since the movie’s terrors are simultaneously too vague and too familiar to be disturbing.

Which brings me back to that word: if you’re going to have characters pick at their old scabs, and they, like us, are going to be triggered by the word “faggot,” then you have to show all, and not just most of it. The makers of “Spiral” show Malik trembling before the graffiti in his house, but use his body to shield us from a few choice letters. Aaron and Malik also both stop short before they say more than "f—", and Liam (Aaron Poole), Malik’s ex-boyfriend, even adds: “Don’t say it; I hate that word.” The makers of “Spiral” generally side-step the commonplace evil that their characters are supposedly in denial about, making it hard to applaud this slight parable for its heavy implications. 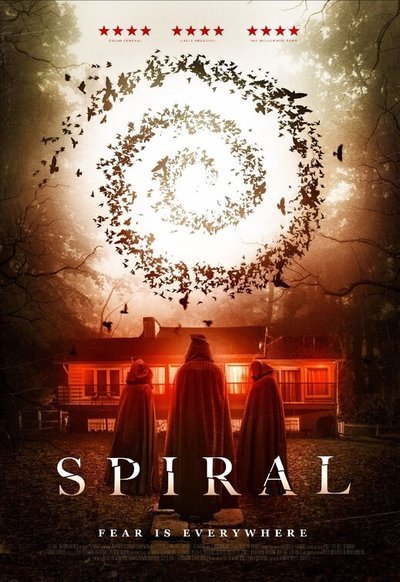