For 12 years in a row, the winner of the Scripps National Spelling Bee has been Indian-American; in the competition's 31 years, 26 of them have been Indian-American as well. Even just last year, when the Scripps champion title was split between eight kids (known as the “octo-champs,”) seven of them were Indian-American. “How Indian Americans Came to Dominate the National Spelling Bee,” ran a headline that followed from the Los Angeles Times. With the Netflix documentary “Spelling the Dream,” director Sam Rega does his own investigation into the subject, and the life of spelling bee athletes, giving Scripps endless free publicity in dry however pleasant fashion.

Rega addresses this domination of spelling with interviews with successful Indian American adults (predominantly men, it should be noted), like CNN’s Fareed Zakaria, comedian Hari Kondabolu, and Dr. Balu Natarajan, the first Indian-American winner from 1985. They talk about the way that spelling competitions have been embraced by Indian American culture, and in turn show how older generations have inspired new ones. It comes in part from a history of immigrants taking opportunity in America, an embrace of learning languages, and a sense that these kids take on spelling like other young people find themselves in more traditional sports until it’s no longer fun for them. There are notes in the doc about what this all means regarding American assimilation, and cultural representation, but those are only briefly touched upon.

One of the students the doc focuses on is Shourav, called the Michael Jordan of spelling by his friends. Perhaps that’s why Shourav always competes with a big Nike logo across his sweater, all part of his calm demeanor when he takes the stage, hunches over a microphone, and spells words that most human beings will never say in their lives. As one of the older people in the competition, “Spelling the Dream” offers an inside look at his strategy for preparation, which he and his parents share with Rega as if it were the key to his success (potential bee champs will want to see just how).

Shourav is joined by other hopefuls, like the young superstar Akash, the superstitious Tejas, and and the bubbly Ashrita; all of them have supportive parents, and everyone is equally endorsed by the project. Whatever stress anyone is experiencing is quelled by the documentarians’ softball questions, which often concern how long the kids have been spelling, or the amount of time they spend each week practicing. Aside from showing where these spellers’ parents are from, there’s little curiosity about everyone's lives outside of spelling bees, and in turn the doc struggles to have its own personality. It’s a welcome insight into the families of people who do it, but the doc's own lack of depth can only make the story so interesting, even with its humble running time of 83 minutes.

The drama is instead saved for the actual competition, where the four kids we follow are joined by dozens of other hopefuls at the 2017 Scripps National Spelling Bee. With this part of the story arriving roughly 50 minutes in, it also nonetheless relies on the same ups and downs as watching a televised spelling bee, only now it has more context about who the parents are, and just how far they've come. There’s still some inherent excitement in watching the sport of spelling—the pauses in between letters, the mistakes they make before a judge wincingly taps the fateful bell—and yet these brief thrills simply come and go within the doc’s too-laid back reporting.

But whoever advances to each respective next round, you want to root for these kids, and cherish the way they advocate for intellect at such a young age. It's just that the whole project has the unabashed tact of a glorified infomercial, especially with a musical score that reminds you of how much it’s simply trying to support the spellers, parents, and the institution whose trophy they all dream about. Rega’s documentary has some inspirational value, but it becomes surprising by the end credits that Netflix doesn't just immediately send you to the Scripps website for more information. 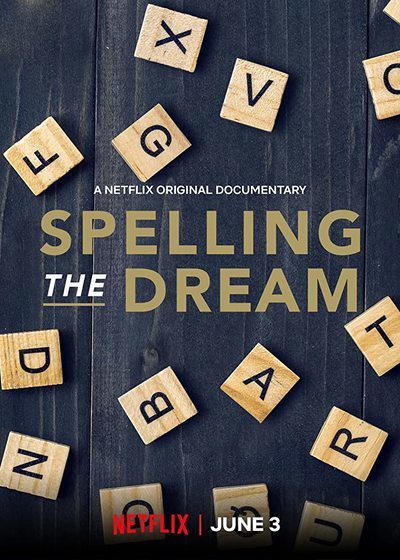