It is one of those great puzzling facts of the cinema that even though animation allows filmmakers to unfurl their creative visions and create entire universes as vast, wide and detailed as their imaginations, the number of genuinely good animated science-fiction films is surprisingly low. Oh sure, there are a few gems here and there, including the family favorites “WALL-E” and “The Iron Giant” and more adult-oriented efforts like “Fantastic Planet,” “Heavy Metal,” “A Scanner Darkly,” and the anime classics “Akira” and “Ghost in the Shell.” But, for the most part, there is something about the infinite possibilities that the combination of genre and format has to offer that seems to stymie filmmakers and leads them to instead offer up such banal retreads as “Battle for Terra,” “Escape from Planet Earth,” “Mars Needs Moms,” “Planet 51,” “Pinocchio in Outer Space,” to name just a few. Even the fabled “Star Wars” franchise was unable to avoid this tendency when it went the animated route with “Star Wars: The Clone Wars,” which currently stands as the cinematic low point of the saga to date.

The latest film to epitomize this odd trend is “Spark: A Space Tail,” an utterly lifeless and profoundly unoriginal animated effort that is desperately lacking the very thing in its title. This is the kind of film that borrows, to put it politely, so many things from other sources that older viewers could amuse themselves—since the film sure isn’t going to—by trying to see how many lifts from other, better genre favorites they can find. In the first 90 seconds or so alone, we are introduced to Bana, a world populated almost entirely by monkeys that is then attacked by the hateful General Zhong (A.C. Peterson), who deploys a fearsome space creature known as a Galactic Kraken that creates a black hole that tears the planet apart into tiny shards, one of which contains Spark, the infant son of Bana’s benevolent leader, who, perhaps inevitably, also happens to be Zhong’s brother.

Thirteen years pass and Spark (Jace Norman) is now an increasingly restless teenager whose only companions are friends Chunk (Rob deLeeuw) and Vix (Jessica Biel), who go off from time to time to salvage junk, and a robot caretaker known as Bananny. Desperate for excitement, Spark intercepts a message summoning his friends and decides to “borrow” their spaceship and respond to it himself. Through circumstances too labored to get into here, Spark finds himself in possession of a device belonging to Zhong that will allow him to track the wily and elusive Kraken and use the threat of its destructive power to make the rest of the universe bow to him. Instead of taking the device back to his friends, Spark decides to go hunting for the Kraken himself. Without giving too much away, this leads to a series of misadventures that eventually result in him leading a ragtag group of outcasts into a final battle against Zhong’s massive forces as he at long last discovers both his birthright and his ultimate purpose.

If you think that description was unbelievably tedious and lacking in anything remotely resembling originality, imagine sitting there and watching it all play out over the course of its seemingly endless 90-minute running time. Writer/director Aaron Woodley has come up with a story that brings so little of anything new to the proceedings that even the very young children—its target audience—will be sensing that they have seen it all before and almost certainly done better there than here. (The closest thing by Woodley that's close to narrative innovation is the weird preponderance of jokes revolving around digestive issues on display.) Visually, the film is also a bust as the look offers nothing of value either—even though it could create virtually anything thanks to the animated format, the worlds and the creatures inhabiting them are as generic as can be. As for the characters, they fail to inspire much enthusiasm either: Spark is pretty much a jerk in the early scenes and a bore in the later ones, Zhong is a drag whose big character detail is that he is self-conscious about being short (you know, just like the bad guy in “Shrek”) and the others are so colorless that they tend to fade from memory even while they are still up there on the screen.

The truly baffling thing about “Spark: A Space Tail” is that even though it seems as if it was always destined to be dribbled out in a few theaters during an otherwise busy weekend before landing on home video as soon as the contracts allow, it nevertheless somehow managed to get a number of familiar faces, including a couple of Oscar winners, to contribute their vocal talents. Jessica Biel supplies the voice of the spunky and resourceful Vix and Patrick Stewart portrays the leader of a group of stranded soldiers whom Spark recruits to help him defeat Zhong. More bizarrely, the voice of the Queen of Bana, who yearns to one day reunite with her son, is done by Hillary Swank, a move that is all the stranger since it is a supporting part at best. Finally, no less of a star than Susan Sarandon herself gets the honor of providing the voice of Bananny, a robot that is basically a combination of WALL-E and the Granny from the Tweety & Sylvester cartoons. Granted, choosing to supply the voice of a milk-and-cookie dispensing robot in a cartoon that virtually no one is going to see is far from the most questionable choice that Sarandon has made recently. Of course, her work here will not play a part in any future Lifetime Achievement tributes unless the person putting the clip reel together is a former Hillary Clinton supporter. 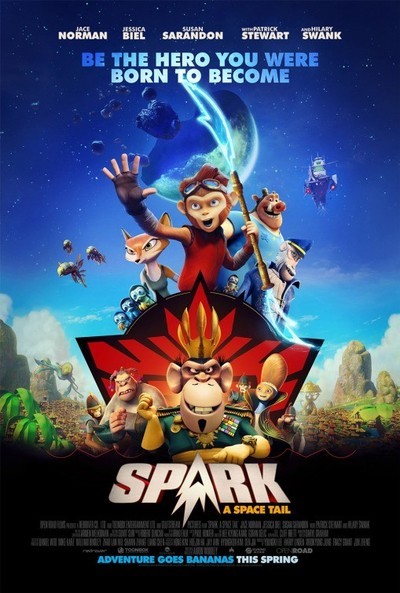 Hilary Swank as The Queen

Patrick Stewart as The Captain