Wait, when did everyone get a "-verse" to encompass all of their IP? I get it that the MCU was a way to bring together the different Marvel characters, and the Spider-verse was a way to bring the alternate universe versions of Spider-Man into one story. But around the time that the flying monkeys from "The Wizard of Oz," Superman, King Kong, Agent Smith from "The Matrix," and Ingrid Bergman from "Casablanca" show up in "Space Jam: A New Legacy," a movie about basketball-playing Looney Tunes characters, we cannot help wondering whether the movie's not-so-side hustle is promoting every character they own that ever inspired a Funko Pop. We might also wonder whether it's too much of a distraction from what's happening in the movie as we play "Who's that?" among the hundreds of cosplaying real and virtual background figures.

And there is a lot going on in front of that Sgt. Pepper album cover-style collection. As in the 1996 "Space Jam" starring Michael Jordan, "A New Legacy" is the story of a real-life basketball superstar transported into a cartoon world for a high-stakes game. This time, it's LeBron James as a slightly fictionalized version of himself (that's not really his family, but the barbs about his switching teams are totally legit). For the two or three people in the audience who might not fully appreciate who LeBron James is, there is an opening sequence showing some of the highlights of his basketball career. There's also a flashback to him as the child (played by Stephen Kankole) of a single mom in 1998 Akron, being taught by his coach that if he wants to have the opportunities that basketball can make possible for him, he has to get his head in the game before he sets foot on the court. This lesson about focus and total commitment will come up again later.

In the present day, we zoom in on his lavish residence and see his two sons on the basketball court. The younger one, Dom (Cedric Joe) is struggling to tell his father that he's less interested in playing basketball than he is in creating computer games about basketball. He has almost finished one that incorporates some moves from the pros with some gamer upgrades like style points and power-ups.

James then brings his son to a pitch meeting at Warner Bros. about a content-creation algorithm that would insert him into various properties in the "Warner Server-verse." He turns them down, but he and Dom are then captured by that algorithm, personified by Don Cheadle as the power-mad Al G. Rhythm. Al gives Dom the appreciation he wanted from his dad. Dom thinks they speak the same digital language. What he doesn't know is that Al has told James he cannot get his son back unless he can beat Al's team in a basketball match based on Dom's game.

James has to round up a team, and this is where the Looney Tunes-verse shows up, including Bugs Bunny, Tweety, Sylvester, Granny, Road Runner and Wile E. Coyote, complete with an Acme arsenal of gadgets and his handy signs to hold up for his commentary. Zendaya provides the voice for returning cartoon basketball star Lola Bunny, and the commentators are real-life sportscaster Ernie Johnson and real-life utility comic relief Lil Rel Howery. Sonequa Martin-Green, so good earlier this year in "The Outside Story," makes the most of a small role as James' wife and Dom's mother. And it was good to see the real-life basketball stars on Al's team include two players from the WNBA, Nneka Ogwumike and Diana Taurasi.

The list of credited screenwriters is long enough to field a basketball team of their own. But the cheekiness of making the bad guy a content-creating corporate algorithm—based on past content while advocating for individual creativity in a quasi-remake stuffed with infomercial-level self-promotion—is not as effective as they imagine. Still, director Malcolm Lee balances the action, the family dynamics, and the Looney Tunes silliness very well, recognizing that it's the longing of a father and son for a better way to connect (while appreciating their individuality) that's the heart of the storyline. This is an improvement over the original film, which was pretty much an elevator pitch with slam dunks.

I won't spoil a surprise guest appearance or a funny "Casablanca" joke. I'll just say that the more you know the Looney Tunes characters, the more you'll appreciate how they bring their special skills to the game. There may be a big, corporate, algorithm-like formula deciding that a quarter-century later it's time for another "Space Jam," but it's good to see that the insouciant anarchy of Termite Terrace is still pure, unrepentant id.

Available in theaters and on HBO Max on July 16. 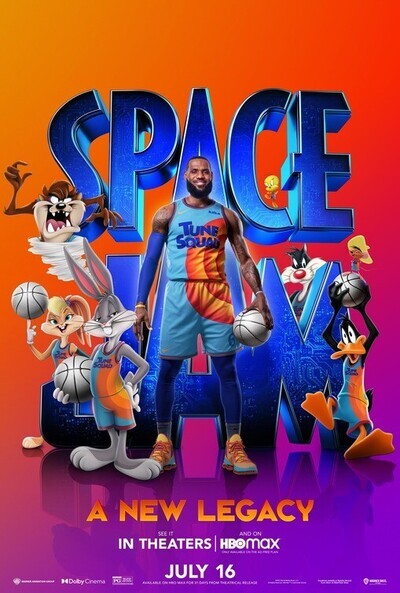 Rated PG for some cartoon violence and some language.

Anthony Davis as The Brow (voice)

Writer (based on "Space Jam" written by)