“Can I be honest with you?” This is a doctor speaking, from an early scene of the tepid horror psychodrama “Son,” so you know that good news is not coming. Sure enough, the doctor takes off his glasses—never a good sign—and says: “We don’t know what this is.” I mean, we do, but he doesn’t: “Son” concerns what’s really going on with sickly David (Luke David Blumm) and his single mom Laura (Andi Matichak), the latter of whom escaped a religious cult eight years ago, and now may or may not be psychologically unstable.

David is understandably the focus of Laura’s instability, since he, an eight-year-old, was born right around when Laura escaped the above-mentioned cult. Also (and here’s where I’m obliged to throw in a NECESSARY SPOILER warning): David may or may not be a vampire. At least, that’s what his biological symptoms and generic behavior suggest, between gastrointestinal bleeding and festering skin rashes. David’s health only improves after he eats human flesh, so there’s that, too.

But there isn’t much of a mystery about what’s really going on in “Son.” Instead, so much of the movie is a pat is-she-or-isn’t-she crazy narrative about Laura, a single woman who may have made up a past trauma to explain sexual trauma that’s occasionally mentioned, but never seriously considered. Writer/director Ivan Kavanagh (“The Canal”) uses vampirism, or something similar, to reduce personal grief to a few trite emotional symbols. Unfortunately, the sins of David’s absent father and unreliable mother are barely addressed every time this kid either hemorrhages or drinks blood.

There’s even a pair of temperamentally opposed cops, one who’s hard on Laura’s story, and another who’s kinda sweet on her. As nice cop Paul, Hirsch stands in for a lot of what’s left out of “Son,” namely a distinct personality. He squints and sighs with such a pained expression that one can’t help but wonder what his character’s deal is, and why it’s not in the movie.

Also missing from the movie: Laura’s cult, who are mostly absent beyond a few (genuinely creepy) glimpses of its plain-dressed members. That sort of crucial omission is presumably the movie’s point, since “Son” is about the gaps in Laura’s knowledge, and how they serve to protect her from the awful truth about her past. Still, these major elisions might be more compelling if, say, the cartoons that David watches post-feeding were more evocative. Or what if David’s demon father were represented beyond a few sentences? Maybe Paul’s research could tell him something more than an unbelievable “she made it all up,” to quote one psychiatrist? Something like that?

“Son” appears to be about Paul’s blind faith, the kind that’s required of anyone who wants to have a meaningful relationship with a traumatized loved one. So if you don’t see something, that doesn’t mean it’s not there. For example: Laura’s sexual trauma is hinted at throughout, but through the lens of horror movie Americana, like a sexually explicit cartoon drawn on the cover of her motel bible, or a carefully obscured monster who, standing right behind Laura, may or may not exist. Blood is clearly visible throughout “Son,” but it doesn’t say much. Kavanagh constantly tries to overwhelm viewers until we submit to his movie’s gas-lit logic, because while psychological trauma may be invisible, arterial spray gets on everything.

You can't watch “Son” without feeling a little sick to your stomach, especially given Kavanagh’s fascination with David’s condition. Blumm squeals ("It hurts. It hurts, mom! I need help!"), curses (“Get me some f**ing food, you b***h!”), and giggles like, uh, a monster. None of which is new horror movie behavior, but that’s exactly why “Son” never earns our sympathies. It’s easy to make audiences squirm in their seats when pushing buttons is your goal, but that’s not exactly praiseworthy when your movie’s also ostensibly about what can’t be seen. Ambiguity, like gore, isn’t meaningful unto itself, nor are the movie’s solid but unremarkable performances deep enough to warrant viewers’ emotional investment. So while you’re welcome to react to “Son” however you like, you needn’t feel compelled to puzzle over its schematic violence, implied or otherwise. 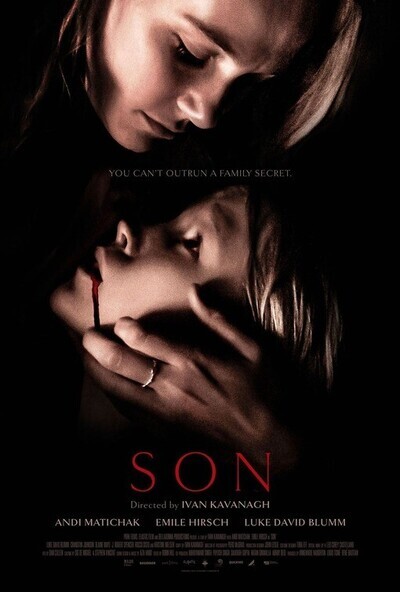