There's a common theme in the contemporary comedy of Bro-dom And Its Discontents, which is, in a nutshell, "Be grateful for the Inappropriate Guy." And this is because, according to the contemporary comedy of Bro-dom and Its Discontents, from the tolerable ("I Love You, Man") to the highly unfortunate (each "Hangover" movie), the Inappropriate Guy is, as inappropriate and awful as he can get, a key to your better self, a way to appreciating honesty and looseness and what the id wants and all that sort of thing. In real life this notion is all kinds of horse manure, but hey, one function of the cinema is to depict and, alas, sometimes indulge our fantasy lives. Or your fantasy life—for a large portion of my adult existence I've kind of been The Inappropriate Guy, although I've never beheaded a giraffe.

Anyway, "Someone Marry Barry" is a Bro-dom comedy with a sharp focus on The Inappropriate Guy, the titular Barry, who poses for wedding party photos with his scrotum hanging out of his dress pants (that's one of the movie's opening jokes) and "compliments" one of his three friends (the quartet is the functional unit of the Bro-dom comedy more often than not) on his choice of girlfriend by observing "Any guy would gladly get up to his nuts in her guts." So, yes, a charming fellow, but as these things often go, a fellow with apparently enormous heart who really loves his friends and is really just guilty of being too honest and so on. The twist of this largely ordinary and mostly unfunny (although very professionally shot and edited) movie is that, after his bros conspire to tamp down their raucous friend by marrying him off (great plan I know), Barry meets, and falls for, his exact female counterpart. Various catastrophes ensue, although hilarity does not.

Barry is played by Tyler Labine, who, in the context of this movie, I kept thinking of as "Not Chris Pratt." The friends, each and every one a type and not a character, are incarnated by Thomas Middleditch ("Not B.J. Novak"), Hayes MacArthur ("Not Bradley Cooper") and Damon Wayans, Jr. ("Not Damon Wayans"). Barry's love match is played by Lucy Punch, a British actress whose comic talent was tapped very well in the 2011 movie "Bad Teacher" and whose material has not served her so well since.

The movie is replete with tasteless jokes that are clearly in the interest of upping the "outrageousness" ante relative to what you would see or hear in a more expensive studio-backed Hollywood project. But because the movie is at heart as fake-sentimental as any other such motion picture, or greeting card, or what have you, there's a lot of backpedaling after, say, a random attempt to milk laughs out of human trafficking. A movie that lies to you about life and relationships can get over if it makes you laugh, or shows you engaging pictures, or something; "Someone Marry Barry" does no such thing. It does contain an Ed Helms cameo; along with his appearance in "We're The Millers" last year, this indicates that he'll say yes to pretty much anything, so if you'll excuse me I'm going to write up a pitch right now. 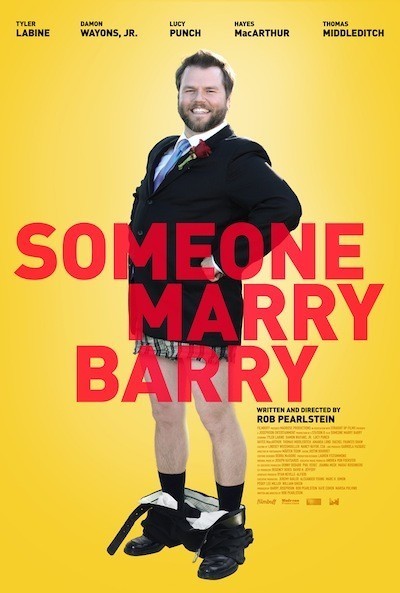