“Small Engine Repair” is a film that plays out in two distinct sections. The first one comes across as a fairly excruciating exercise in bully-boy storytelling, and feels like a collection of misfired improvs delivered by actors more interested in working additional f-bombs into their lines than anything else. Unfortunately, with the advent of the second and dramatically meatier section, it really begins to slide downhill into a tedious stew of toxic masculinity, sexism, homophobia, and the dangers of modern technology—or, as one character puts it, “Dis Instagram shit!”—that's all the more off-putting when it almost seems to be endorsing those qualities instead of indicting them.

The film revolves around Frank (John Pollono, who wrote and directed as well), an ex-con and recovering alcoholic who has spent the last ten years walking the straight and narrow. He working in his small Manchester, New Hampshire garage in order to provide a decent life for daughter Crystal (Ciara Bravo), a high school senior who has just been accepted into college, and who he has been raising alone since the departure of his ex Karen (Jordana Spiro). Helping him out are his two best pals, Terrance (Jon Bernthal) and Packie (Shea Whigham), who love Crystal as much as he does but whose boozy self-destructiveness inevitably causes him all sorts of grief. After a Christmas excursion to a local bar ends in yet another stupid brawl that culminates with Crystal witnessing Frank nearly beating a guy to death, the three friends break up and go their separate ways.

Three months pass and Frank lures both Terrance and Packie back to the garage one evening under false pretenses in order to mend fences. The two are wary at first but after the inevitable wave of insults and recriminations, they reconnect and settle in for a night consisting of rehashing old stories while chomping on red meat and washing it down with the good Scotch. Frank even has a local college kid, Chad (Spencer House), coming by with some molly for dessert. I will say no more except to point out that what initially looks like a night of aggressive male bonding takes a decisive turn for the ugly as Frank’s intentions are finally revealed.

During my post-viewing attempt to understand how such a grimly unappealing work came to be, I discovered that the film is based on a play Pollono wrote and that was produced in 2011 to some acclaim. It would appear Pollono has made two key changes with this self-adaptation that were presumably done in order to open it up dramatically and in terms of attracting a potentially wider audience, but which end up doing it no favors at all. On stage, the characters of Crystal and Karen were referred to but evidently never actually seen; now they turn up here in the flesh in the evident hopes of keeping the film from seeming like an overt testosterone fest. Great, but Pollono’s screenplay gives those characters so little to do during those scenes they might as well still be on the sidelines. It also appears that on stage, the narrative consisted entirely of the fraught reunion in the garage; Pollono has now elected to add on the opening section to include wider locations and give a better sense of the characters prior to the meat of the story. However, since nothing of real consequence appears in this section outside of the bar fight, we have to sit through a lot of unnecessary introductory scenes before finally arriving at the equally unnecessary central plot.

The rest of the film more obviously demonstrates its theatrical roots and not in a good way. Pollono seems to have directed his actors as if they were still on the stage, resulting in everyone playing to the non-existent rafters and coming across as crude and uninteresting caricatures—Bernthal and Whigham are obviously talented actors but they come across like refugees from a revival of Of Mice and Men staged by Rob Weiss. Once the story finally kicks in after the interminable opening, it also proves to be little more than endless monologuing—even the drug dealer gets to do one—before arriving at a development that's meant to be startling but which most viewers will have seen coming long before it kicks in. That said, most viewers probably will not see the grand climax coming, simply because few would expect something as grotesque and ugly as the would-be shocker deployed here—it evokes the most infamous moment in Tracy Letts’ “Killer Joe” but in such a tasteless manner that even the characters seem to question it before plunging right in. (To be fair, it was the one moment that left me curious as to how it was accomplished on the stage every night.)

“Small Engine Repair” is little more than 103 minutes of a would-be provocation whose only real advantage is that it's ultimately too dopey to be as offensive as it clearly could have been. It has nothing of note to say about the issues it pretends to raise, though it does try to say them as loudly and as pseudo-colorfully as possible. Even though the source material is only a decade old, the whole thing feels like a relic of a past era for which there was no notable sense of nostalgia. Put it this way—if you see only one movie this year that involves someone delivering a seemingly irrelevant monologue involving wristwatch being stuck in a potentially uncomfortable part of the human anatomy, let it be a spin of the “Pulp Fiction” Blu-ray instead of this gibberish. 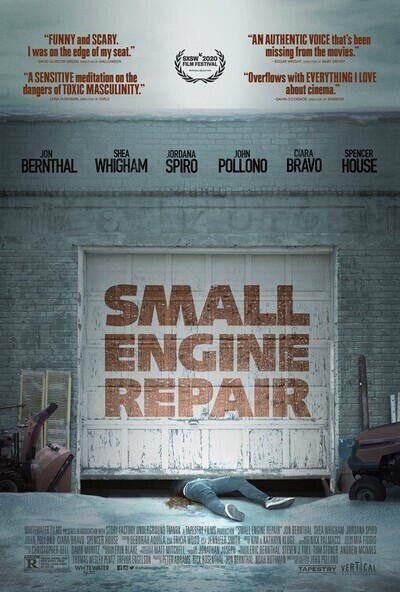