There’s no pizza in “Slice,” a horror-comedy pastiche about a haunted pizza parlor. Maybe that's a small part of the playfulness for a movie that mixes ghosts, gruesome murders, werewolves, and other things best discovered on your own. Or, maybe the filmmakers just forgot the pizza, because they have so much else on their mind. With a movie like “Slice,” either is possible.

There’s also not a whole lot of Chicago's own Chance the Rapper (billed here as Chance Bennett) in the film, even though he’s listed as the lead, and plays a super-rad-sounding scooter-driving werewolf named Dax. But that doesn’t mean "Slice" isn’t worth a watch; because while Bennett might bring in viewers, this is a charismatic, however cluttered proclamation of another exciting film presence, his “Angels” and “Sunday Candy” music video director, Austin Vesely.

Playfully enough, the movie starts with Vesely’s death, as he plays a dopey pizza guy named Sean whose throat is slit before the opening credits. His murder causes a stir in the town of Kingfisher, where Sean's employer Perfect Pizza Base has been founded on a haunted burial ground that was once an insane asylum, creating 40,000 ghosts. But the ghosts have been pushed away from their homes to a different neighborhood called “Ghost Town,” while a band of middle-aged white women protest outside the pizza place, demanding that the pizzeria be closed out of respect for the spirits. A reporter (Rae Gray) is investigating the murder with no help from a photographer (Joe Keery of “Stranger Things”), while two bumbling cops (Tim Decker and Will Brill, their accompanying music seemingly inspired by “Twin Peaks”) follow their own hunches.

Oh, and Bennett plays an elusive Chinese food delivery outlaw who is a werewolf and maybe the culprit. He previously worked at the Chinese food restaurant that was there before Jack (Paul Scheer) opened up Perfect Pizza and hired the likes of Astrid (Zazie Beetz), who gets into the murder mystery mess as she was dating Sean before he was killed.

Vesely has a big imagination and even larger ambition for this project, but there are limits to his on-the-fly world-building: for example, we don’t fully understand the rules of being a ghost after a person is killed, or how much other monsters co-exist with humans, even if we know what these Halloween mainstays symbolize here. And there’s even a clear limit with Bennett’s on-camera availability, as he’s in maybe 20 minutes of a movie, causing the story to focus on its roughly-sketched supporting characters, with-hit and-miss comic success. Vesely at times struggles to keep the movie busy with these characters, sometimes opting for overt stylization (like bad-ass slow-motion shots, as propped up by Ludwig Goransson and Nathan Matthew David’s score), as the focal murder mystery doesn’t have a proper immediacy.

But counter these shortcomings with “Slice"'s truly inspired strokes, like when it presents the fast food version of a “Fast & Furious” vehicle meet-up (and bestows us another wry Y’lan Noel comic performance), or how the production design makes Kingfisher feel like it's the most fun horror movie lot you could live on. And when Bennett does show up, he has a true movie-star quality (with help from the "Wanted" signs plastered in earlier scenes that tease his impending arrival). With striking ease, Bennett displays a playful nature that makes for a few laughs, but most of all leaves you wanting more of him as an actor. In particular, his lack of ego towards his star presence would be excellent for a romantic comedy. (Netflix, you up?)

With "Slice," Bennett is more the hype man for Vesely and not vice versa; the biggest spectacle of “Slice” comes from watching a debut director try to pull it all together. That being said, I had more fun savoring the sociopolitical narrative that was in the background of “Slice,” instead of the foreground's spooky potpourri. It’s always a thrill to think you’re seeing one movie, only to find out that someone is working overtime to offer you a second, different one, and that’s what Vesely does when treating ghosts as an impassioned metaphor for gentrification, and refocusing his monster mash around what makes a true ally. It’s always exciting when a director is hungry like this, even more so with their first film. Just imagine what he’ll cook up next. 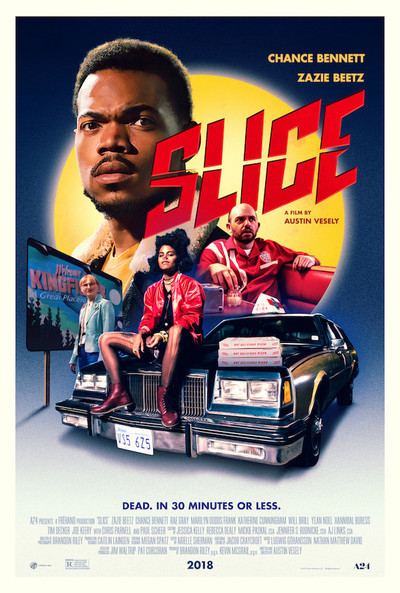 Will Brill as Bradley