A group of Inuit teenage girls battles some aliens in “Slash/Back,” a charming directorial debut from Nyla Innuksuk. Perhaps most famously, Innuksuk co-created a Marvel Comics character named Snowguard, who hails from the same Arctic place as these girls—Pangniturang, Nunavut. In this film’s press notes, Innuksuk says that “this is primarily a movie for Inuit,” but its deft hand with genre ensures that everyone could have fun with it.

The leader is Maika (Tasiana Shirley), who was raised to be a hunter by her father (a prologue shows them on the water, ready to take a shot). Like her friend's best buddy Jesse (Alexis Vincent-Wolfe), rebellious hothead Uki (Nalajoss Ellsworth), and the fearful Leena (Chelsea Prusky), she’s feeling more detached from her surroundings and looks forward to getting away from the food, people, and culture she has grown up with. Their home lives illustrate different ways of class and parenting in this world—Leena is grounded with barely a glance from her mother in their comparably wealthy home; Maika has become distant from her working-class father. A lot of these kids are in the shadows of their parents, while the gorgeous Arctic background looms.

After the first alien encounter, involving a ravenous polar bear, they struggle to make sense of it. One of the teens, Uki, thinks that it’s a hallowed evil spirit known to shape-shift and steal children. But one of the teenagers hilariously writes that off as just part of "stupid old people stories because they didn’t have internet yet.” That tension between the past and the present exists throughout "Slash/Back," especially when it comes to Maika’s former training as a hunter.

But the aliens are very real, and they can sniff their blood while on their hunting path. Uki makes it even worse when she kills one of the babies—an attack scene with a puppet that’s just too cheesy for its own good—and makes the beast as hungry as it is vengeful. Soon, the aliens are taking over human bodies from the town, bending their limbs backward and blowing up their faces to be unrecognizable (a clever way for the story to disguise contortionists). And because of the teen's closeness to the aliens before, they are the biggest targets.

“Slash/Back” gives its speaking parts to mostly young actors, which brings about its own viewer feelings about child acting; your mileage may vary. The movie does have some rickety line-reading from its performances, but it becomes a fitting part of the experience of watching awkward pre-teens. They remind you just how unpolished that age can be. Teenage sentiments like "Too bad you're a butthole, the exact opposite of a friend" are expressed in a way that feels natural.

The film isn’t going to be scary for those older than Maika, and it’s not meant to be. At least the special effects can be good when they’re not erring too close to the B-movie stuff this production is treating with a more serious tone. It’s impressive, selective stuff: purple tentacles pop out of hands and eyeballs, while possessed animals like polar bears and deer walk on broken limbs. One of its best visuals involves what’s behind the face of an alien-consumed body—it’s close to genuinely disturbing.

Innuksuk is well aware of how this plot is more of a personal homage than something wildly original, so it features heavy references to movies like “The Thing” and a load-‘em-up montage in “Shaun of the Dead.” By making those nods, I wanted some of the ambition of the former or the zippiness of the latter. And for a movie that condenses much of its action to just one night where the adults are getting drunk at a party, the pacing isn’t as strong as it could be.

But “Slash/Back” gains its greater power with its entertaining narrative of these Inuit heroes warding off invaders, trying to save their home while earning a deeper pride in that very place and its people. It’s sincerely sweet and entertaining, and its impact is felt even more as the black alien blood starts to fly. Like it says on Maika’s jacket while she prepares for battle: “No justice on stolen land.” 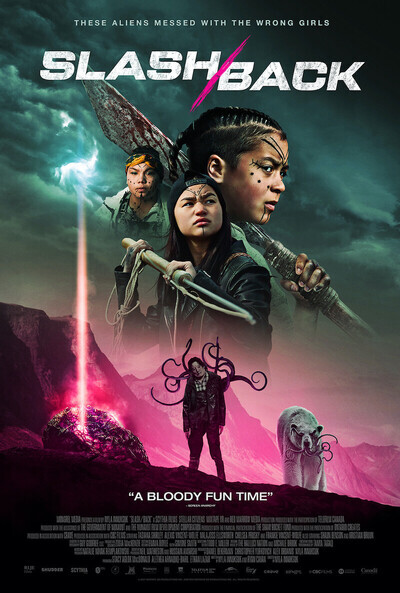