Punishingly dull Hong Kong action-thriller "Sky on Fire" is the worst kind of bad action movie: the kind that half-assedly purports to be uplifting, but is actually only convincing when it's about explosions, car chases, and amorally spectacular violence. One-dimensional heroes and villains fight each other for stakes that are constantly shifting from the micro to the macro-level. Ultimately, the film concerns the privatization of medical care and how it inevitably infringes on humanity's basic rights to healthcare. Which is unfortunate, because the movie, written and directed by formerly legendary action filmmaker Ringo Lam (his movie "City On Fire" was a major influence on Quentin Tarantino's "Reservoir Dogs"), only really comes alive when cars are being used as battering rams and computer-generated explosions proliferate like fireworks.

This would be bad enough if the plot of "Sky on Fire" wasn't also a hideously convoluted kudzu of clichés. First we meet Tingbo (Daniel Wu), a security guard who is still mourning his wife's death. Seconds later, we're introduced to Jane and Jia (Kuo Tsai Chieh and Chang Hsiao Chuan), siblings who bump into Tingbo after they travel to Kowloon in order to get Jane experimental stem-cell cancer treatment. Next, there's a minute-long flashback at the laboratory that Tingbo's company bankrolls. We see a man who is later identified as Prof. Lee (Jim Chim) burn to a crisp while sad lady doctor Ko Yu (Zhang Yingchu) beats her breast and laments Lee's smoky fate.

This all happens in the first five minutes. If watching this movie came with drinking game rules, you would take a big swig now.

Take another drink. Just a small one this time.

Now, you're probably thinking something that I thought while watching "Sky on Fire" (though I was, and am still quite sober): what nonsense is this where a security guard for a private organization hoarding precious medical research can also be a good guy? Haven't these people seen "RoboCop"? Tingbo's moral compass is sadly never fixed because it's never shown to be broken. His only crime is trusting Tang, a boss that anyone with eyes can see is one mustache away from being a nefarious mustache-twirling villain. Still, let's humor Lam and assume that the story is about ... well, what is it about? First it appears to be about Jane and Jia's fight to get Jane treatment. Then it's about Tingbo's fight to protect Jia from Tang and attack dog Wolf. Finally, it's about Tingbo's struggle to reveal the interpersonal betrayal that serves as a foundation for Tang's predictable corporate greed.

We pause to note that "Sky On Fire" does not in fact take place in the air. There are no planes, nor is there any BASE-jumping, or crazy parachuting, or what have you. Instead, most of the film takes place in or around a skyscraper named Sky One (no relation to the British news network). I hope you have your drink of choice handy, because even I feel thirsty now.

Through it all, there's one basic tenet guiding our sympathies: human life is precious, and the people who finance life-giving research should have their clients' interests at heart. This is a fairly basic concept that's articulated without much grace or ingenuity through a soul-deadeningly messy narrative that has way too many flashbacks, expository info dumps, and other klutzy digressions. A myriad of side-plots distract from the fact that Lam's scenario has no urgency. Ko Yu vows to help Jane no matter what while Ziwan wanders around unencumbered as Wolf and Tang try to track him down. Tingbo tries to protect Jia, and Jia doesn't do anything except upset Wolf and indirectly lead Tang to Ziwan. Some crimes—especially the extensive totaling of unfortunate onlookers' cars—are committed along the way, but they're never reported. The good guys run around, get chased, take a break, then run around some more. Big whoop.

But what about the action scenes, I hear you asking? Surely they go boom real good. Well, yes and no. Many of the action scenes are covered rather than directed. They're only as compelling as they are brutal, like the scene where somebody gets a glass table thrown at them, or the one where a car hits a motorbike which crashes through a building and then smashes into a parked car. This is especially funny when you consider that Tingbo's motto is nakedly spelled out on a piece of calligraphy: "Life is so fragile." As you finish your drink, please note that "fragile" is not a synonym for "precious." 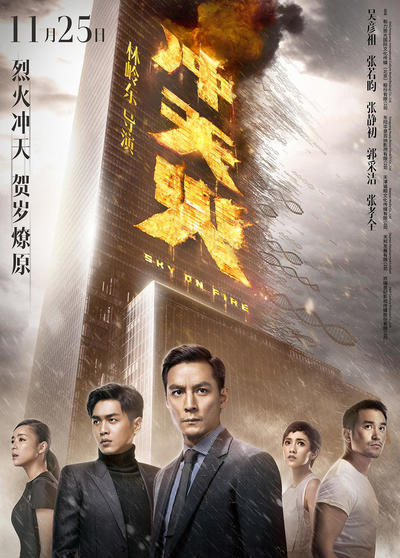