Ensemble action film "Skin Trade" hasn't been released theatrically in the United States yet, but it already feels dated. While star Tony Jaa is arguably the most compelling contemporary action star, his latest film feels like a throwback to the kind of action movies that were big when "Skin Trade" co-star Dolph Lundgren was huge (at 6'5'' and with a heavy Swiss-German accent, Lundgren never quite cut it as a square-jawed alpha-hero-type). The film hails from a decadent period of action cinema (i.e.: late '80s to early '90s) when every renegade cop had a private vendetta, a pet charity/social concern, and a few lousy quips in his back pocket.

This movie's makers haven't met a formula cliché that they don't like: two hot-headed law-men from opposite sides of the tracks (Jaa and Lundgren) pursue their respective agendas while trying to shut down an international human-trafficking ring run by evil Serb Viktor (Ron Perlman) and his four sons. "Skin Trade" is, in this light, a fundamentally absurd type of entertainment. But it is executed so well (for what it is): the film's lively action scenes are mostly well-choreographed, and the film's stars are treated, well, like stars. If you like your martial arts films to be action-packed, but also unironically simplistic, and thoughtlessly violent, then you will really enjoy "Skin Trade."

As is often the case with big, dumb action spectaculars, "Skin Trade" is best enjoyed if you take its most blissfully absurd qualities in stride with its most appreciably well-crafted assets. "Skin Trade" begins with a crass jolt: a girl sneaks away from her Cambodian home, and is soon abducted and forced to become a prostitute. We then meet the two men who are out to stop Viktor, and any other men who would take advantage of similarly defenseless teenagers: Tony (Jaa), a hot-headed undercover cop from Thailand; and Nick, a New Jersey cop whose family is killed in a tragic, but well-aimed rocket-launcher attack. Yes, you read that right: the inciting incident in "Skin Trade" is a bazooka assault that leads Nick to destroy anyone that gets in his quest for revenge.

Now, you might be wondering about the tone of a film that kicks off with such a loud (and literal) bang. "Skin Trade" isn't campy, and doesn't take time to wink at viewers. It's also not funny enough to be clever about its negligible dialogue and basic plot twists. Moreover, "Skin Trade" is the kind of movie where a main character (Nick) pushes through his grief by peeling off skimpy hospital bandages, and trudging home to dig up a case of guns he's hidden underneath his staircase. He then uses these guns to blow away a club-full of people. There are no consequences to Nick's actions because, according to the film's logic, Nick is justified. All of his targets are straw men predators, so the film's creators don't even pause when Nick executes a couple of bad guys with a big ol' shotgun.

Look, there's no way around this: "Skin Trade" is ridiculous, and not always in an innocent way. The film's action scenes are terrific brick-and-mortar fight scenes. And most of them are creative enough to be laudatory, like the scene that climaxes with Tony running at Nick (then seated on a stolen motorbike) head-on, or the one where Michael Jai White (yeah, the star of "Black Dynamite" is in this film, too, and so is Peter "Robo-Cop" Weller) takes on Jaa while wearing a silver-colored vest. But yes, there are also a handful of flagrantly dumb scenes in this film, like when Tony flirts with a girl he rescues, telling her "I like a girl who can fight."

Nevertheless, "Skin Trade" somehow transcends its goofiness, and not just because of its charming cast or superior action scenes. The film genuinely feels like a throwback to a not-too-distant time when the best thing a big-budget studio action film could be was both scuzzy and charming. Older films starring Arnold Schwarzenegger, Sylvester Stallone, Chuck Norris, Steven Seagal, and Jean-Claude Van Damme don't deserve to be put on a major pedestal, but many of them retain a certain meathead mystique that their recent starring vehicles do not. But while time hasn't been kind to the best ass-kicking knuckle-draggers, "Skin Trade" is energetic, and winsome. You can teach a new dog old tricks, though why you would want to is anyone's guess. 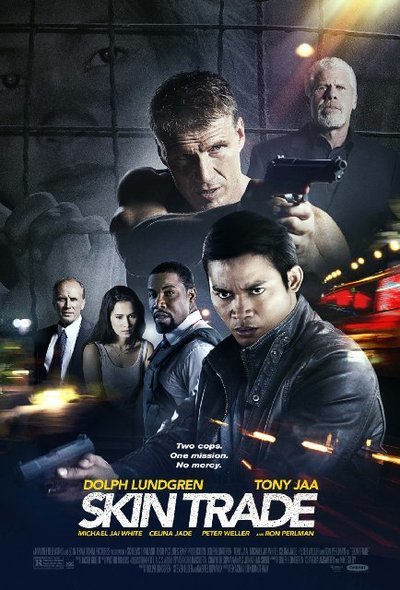