Writer/director Tiller Russell doesn't directly ask us to take a side in "Silk Road," a dramatization of the creation and downfall of the eponymous darknet website. But the implications of which side the filmmaker wants us to lean toward are strong—and feel a bit disingenuous.

On one side, there's Ross Ulbricht, the man who created Silk Road when he was 27 and, within three years, became a multi-millionaire from operating the site. On the other side is a fictional DEA agent, an amalgamation of two such government officials who were legally proven to have committed crimes connected to the investigation of Ulbricht for their personal gain.

Who's the real bad guy here? That seems to be Russell's primary question. He also appears to have taken a side, especially considering the tone of and comparisons made by the movie's coda, in which we learn the fates of the real-life figures from this story. By the end of this movie, though, one likely will be asking: Why do we have to choose?

Ulbricht is played by Nick Robinson, and his character first appears in a pointless flash-forward to the very end of this story, surrounded by federal agents during a sting operation in a public library in San Francisco. In voice-over, Ross offers a bit of his philosophy about freedom and liberty, and sure enough, the next time we meet him, several years earlier, he's chatting up a friend at an Austin bar about his opinion that the Affordable Care Act is an act of government overreach.

His suave diatribes about the free market and whatnot even get him into bed with Julia (Alexandra Shipp), who's shocked in the morning to learn that she slept with a libertarian. It's not a deal-breaker for her, apparently, and she's there when Ross comes up with a guaranteed—and highly illegal—way to make some quick cryptocurrency. Namely, it's a site on the dark web that will allow people to buy almost anything they want, particularly drugs, and have the items shipped to their door—or, ideally, a friend's door, a neighbor's house, or a P.O. box.

Meanwhile in Baltimore, DEA agent Rick Bowden (Jason Clarke) has just been released from a psychiatric facility on account of his addictions to drugs and alcohol. Due to an incident during an undercover operation in Puerto Rico (when he blew an investigation by insulting a drug cartel leader), Rick is given a desk job in the cyber-crimes division, so that he can whittle away the time until his retirement without getting into more trouble.

Even though the actual time is split pretty evenly between Ross and Rick, the heft of this story (based on a magazine article by David Kushner) belongs to the federal agent, whose motives are of questionable honor and whose actions are rarely within the bounds of his job. At first, he's petty about being left out of the loop and ill-equipped for a job that relies on computers (he watches online videos about how to use one and calls in his younger boss for tech support). Later, when his young daughter is denied a scholarship to a school that will cater to her unspecified learning disability, Rick realizes he needs lots of money—and fast.

Tiller connects these characters—the renegade cop and the freedom-loving outlaw—by their obsessiveness and their obsession. It's not subtle, for sure (Julia points out that Ross has let Silk Road come between him and the real world, and Rick's wife, played by Katie Aselton, has a similar conversation with her husband). Russell doesn't have much to say about this shared trait, either. It's the beginning and ending of what defines these characters. That is, of course, apart from Ross' libertarian ideology, which doesn't make him as interesting as either the character or Russell believes.

The characters' unique obsessions primarily drive a plot filled with a lot of games, such as using the online anonymity Ross prizes against him, and some procedural elements and a whole lot of acts of questionable morality. Russell digs into the extent of Rick's mounting corruption—from torture, to entrapment, to extortion. On the other side, Russell makes a point of emphasizing how far removed Ross is from the dealings of people buying and selling increasingly dangerous drugs on his website (the character spends a lot of time in front of his laptop or checking his cellphone, making him even duller).

Neither of these men comes out looking like the hero or, later, the victim he believes himself to be. It's never clear, though, if Russell has a similar opinion about his crooked protagonists. Some of that confusion comes from the filmmaker focusing on the winding turns of the plot, while taking a simplistic approach to these characters. More to the point, "Silk Road" can see through the justifications of one criminal actor in this story, but the movie almost seems to be making its own excuses for the other. 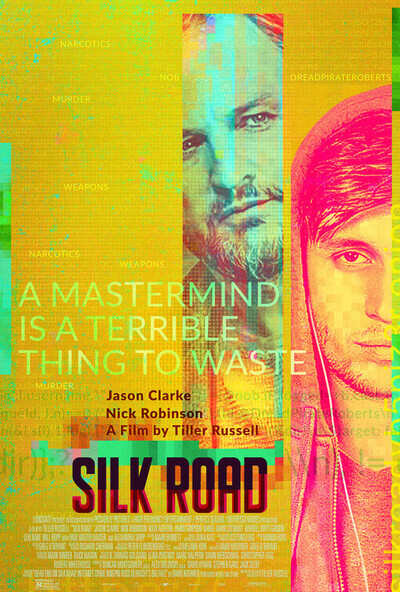