If you are new to Luis A. Miranda Jr., whose life story is the chief subject of “Siempre, Luis,” you will be on the right track following the familiarity of the Miranda name. The larger-than-life Puerto Rico-born New Yorker and immensely successful political advisor and entrepreneur is the father of Lin-Manuel, who certainly needs no introduction as a beloved multi-hyphenate artist and ingenious creator of the Hamilton musical. This familial relation is both a vibrantly welcome blessing for debuting filmmaker John James’ doting character study—Lin-Manuel will surely lure his infinite fan-base in like a magnet—and the very reason “Siempre, Luis” yields mixed cinematic results. In trying to say a little bit of everything about both men, James’ documentary unfortunately falls short of balancing its narrative priorities.

Then again, you can hardly blame the filmmaker for wanting to braid his story with the pull of Hamilton, the ultimate stage sensation of the 21st Century thus far, even though Papa Luis himself comes with enough substance to fill up an entire in-depth documentary on his own. In line with this ambition, James attempts to rightfully emphasize the two Mirandas as driven go-getters who didn’t throw away their shot when they both faced the crossroads of sticking with conventional wisdom vs. chasing their dreams. In Father Miranda’s case, the dream was leaving his prominent family in a small Puerto Rico town and his brand-new marriage for the hustle and bustle of the Drop Dead-era New York City in the 1970s and become a new man as a young and scrappy someone.

Forgive all these on-the-nose lyric-based Hamilton references, but the film itself makes a roundabout point that Lin-Manuel was also influenced by his dad’s life-story in writing the multi-award winning musical, after the young and talented stage and music enthusiast left teaching, pursued his calling in entertainment, and rose to Broadway stardom with the success of In The Heights. And Luis was always there for him every step of the way. After establishing a thriving career in politics through his work for the campaigns of the likes of Chuck Schumer and Hillary Clinton and galvanizing the Latinx communities of New York while he served as the Director of Hispanic Affairs under Mayor Ed Koch, Luis knew exactly how to approach his son’s profession. He quickly realized launching oneself in the notoriously tough world of showbiz took the same discipline required by a political campaign. With that wisdom, he provided the right kind of springboard support to Lin-Manuel, paving the way for him to the TONY Awards and beyond.

“Siempre, Luis” toggles between these narrative threads with some appeal and sense of humor, while also standing as a “Making Of…” documentary of sorts in chronicling the efforts of the Mirandas to take Hamilton to Puerto Rico as part of a fundraising effort after the island was devastated by Hurricane Maria in 2017. In that regard, we see Luis at work while he jumps through various logistical hoops and also witness a student protest when he and Lin-Manuel visit the University of Puerto Rico to announce the news of bringing Hamilton there. (The dissenters carry a banner that reads “Our lives are not your theater.”) And despite all the controversies and protests—which a dispirited Luis views as the disproportionate response of Puerto Ricans who have consistently been shortchanged of their rights as Americans—we see their plan come to fruition, raising nearly $15 million in hurricane relief efforts.

Throughout “Siempre, Luis,” one can’t help but crave more of the historical details that furnish Luis’ extraordinary tale. The film is at its liveliest and most attractive when James reaches for the wealth of family photographs and footage at his disposal, blending them with archival material of the New York City of decades past. In those moments, it’s thrilling to walk in the shoes of Luis as a defiantly charismatic, motivated, and sartorially polished American who loves the movie musical The Unsinkable Molly Brown to no end and has a natural way with people. And while the story of Hamilton adds some color to the package, especially when we get to see Lin-Manual perform “Alexander Hamilton” at the White House in front of the Obamas, it cuts away from the main attraction we thought we came to see. In the aftermath, it feels like two enormous but curiously unfinished movies are trapped inside “Siempre, Luis,” competing with each other for the audience’s attention.

Available on October 6 on HBO and HBO Max 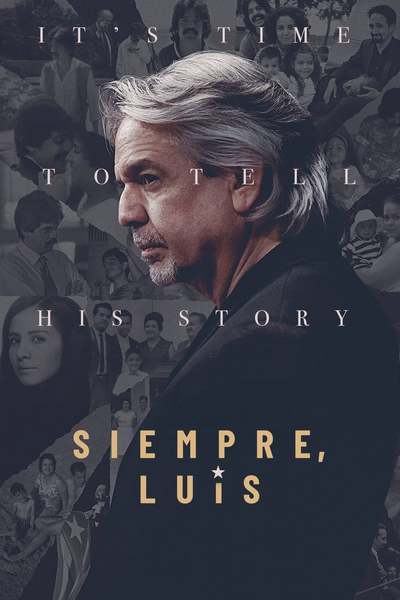 Luis Miranda as Self

Hillary Clinton as Self

Nancy Pelosi as Self

Ed Koch as Self

Chuck Schumer as Self

Jeffrey Seller as Self