“Show Dogs” is essentially “Miss Congeniality” in the dog show world, and if that doesn’t sound like your cup of kibble, well … you’d be right.

Even by the low standards of this type of live-action, family friendly comedy, “Show Dogs” is especially lame. It’s actually kind of amazing that it’s getting a theatrical release at all. From the barely-there characters to the cheesy visual effects to the flat attempts at knowingly corny laughs, this reeks of the kind of material you’d have the misfortune of discovering in the bargain bin under the merciless fluorescent lights of your local soulless superstore. It is bleak indeed. Your family deserves better.

Certainly, “Show Dogs” isn’t aiming for the kind of intelligently written, emotionally poignant offering we’ve come to expect from Pixar Animation, for example—or even DreamWorks Animation. It’s the latest film from Raja Gosnell, who previously directed a couple of “Smurfs” movies and a couple of “Scooby-Doo” movies and “Beverly Hills Chihuahua.” A talking-dog beauty pageant flick is very much in his wheelhouse, but it’s also far more insufferable than its high-concept premise might suggest.

Don’t get me wrong—I’m no film snob. I’m down for a good live-action, talking-animal movie. It doesn’t even have to be an Oscar-worthy film like “Babe.” Something sufficiently snappy and ridiculous looking like “Cats & Dogs” can be a lot of fun if it’s lively and a little subversive. But this is not that.

Gosnell’s film, based on a script from Max Botkin and Marc Hyman, features Chris “Ludacris” Bridges providing the voice of Max, a New York City police canine unit. The gruff Rottweiler botches a sting operation involving an endangered baby panda when he accidentally crosses paths with Will Arnett’s Frank Mosley, an FBI agent who’s also on the case.

While they initially clash, the two must team up to go undercover at an exclusive dog show in Las Vegas, where the smuggled panda is expected to be sold to an evil exotic animal collector. (In case you’re wondering how things work logistically, Frank only hears barking while we hear Max and the other dogs talking. It’s sort of like the conceit with Stewie on “Family Guy,” except the dialogue is never clever.)

But, similar to Sandra Bullock’s all-business FBI agent in “Miss Congeniality,” Max isn’t exactly ready to dazzle the judges with his pizzazz. First, he must undergo the obligatory makeover and endure grueling training alongside Frank as his reluctant handler. They both get some help in that department from Natasha Lyonne in the thankless and personality-free role of Mattie, a veteran dog groomer. This consists of some deathly bathtub fart jokes and a running gag involving Max’s discomfort with Frank reaching for his furry nether regions. (And really, who could blame him?)

Max also befriends some denizens of the dog-show circuit, including a flamboyant, French-accented Papillion named Philippe (voiced by a seriously overqualified Stanley Tucci); the perky pug Sprinkles (Gabriel Iglesias), who’s basically there for sight gags involving various shades of sunglasses and such; a haughty Yorkie named Dante (Alan Cumming), who’s sort of a mean version of the Stanley Tucci dog; and Karma (Shaquille O’Neal), a giant, good-natured Komondor whose entire raison d’etre is to pop in and out of the action spouting empty words of Zen wisdom. “Show Dogs” also forces a half-baked romance between Max and a fluffy Australian shepherd named Daisy (Jordin Sparks), which adds nothing.

In between all the wacky canine antics—which are aimed squarely at young kids who, theoretically, won’t recognize how poorly they’re rendered through uncomfortably jumpy digital effects—“Show Dogs” tries to incorporate myriad pop-culture references to entertain the adults in the audience. These range from Max’s affinity for hip-hop to a throwaway line acknowledging the fact that Arnett also provides the voice of Lego Batman. They are never funny. Not even crack-a-faint-smile funny.

But ultimately, after all this frantic nonsense, “Show Dogs” wants to be About Something. It wants to convey a message, to have a heart. Will Max will manage to save the panda AND win the dog show? Will he and Frank finally forge an understanding and maybe even a friendship? Will you make it through the entire movie without checking your phone out of boredom? These are the kinds of softball questions pageant queens get, human and canine alike. 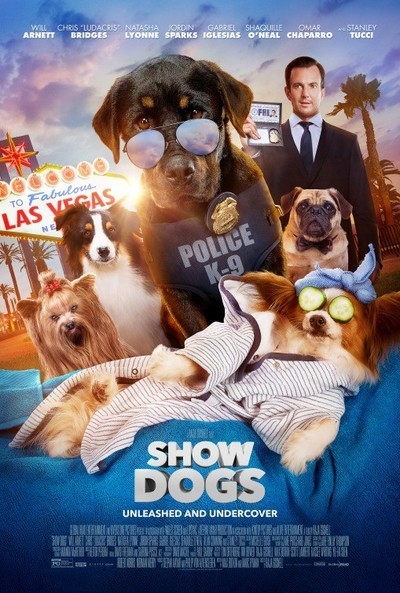 Rated PG for suggestive and rude humor, language and some action.

Will Arnett as Frank