Fair-minded leniency is hard to come by when you’re judging a high-concept horror movie that’s as pokey as “Shortcut,” especially given its tentative similarities with “Jeepers Creepers 2,” another horror movie about teenagers who are trapped and terrorized by a humanoid bat monster. Granted, a lot of American indie horror movies are distractingly self-referential, and “Shortcut” is not exceptional. Unfortunately, “Shortcut” is also not strong enough to be worth defending, even if you were to ignore its similarities to that other movie (which has, for many horror fans, understandably become radioactive given director Victor Salva’s now infamous arrest and conviction on charges of pedophilia and child pornography).

Based solely on its own merits, “Shortcut” is both an amateurish production and a mindless genre exercise. Its creators show only a cursory interest in their characters, whose water-taffy-thin personalities are stretched out in tortuous dialogue and voiceover narration that’s neither worthy nor surmountable for the movie’s game but inexperienced younger cast members. So while you may not think that there should be much to a high-concept creature feature/teen melodrama like “Shortcut,” the movie itself suggests that there ought to be.

Failing that, a higher level of narrative and/or filmmaking craftsmanship would have been appreciated, especially in a movie that begins with aggressively bland voiceover narration—“Every journey has its road. And every road, sooner or later, comes to a crossing.”—and only ends after nice guy Nolan (Jack Kane) observes that “No one believed our story or took us seriously.” I can’t blame ‘em—whoever ‘em are—given that Nolan and his classmates are never really defined or threatened by anything or anybody worth writing home about.

Nolan’s one of five students who, during a routine drive through the British countryside, is beset by unexpected perils, like fallen timber, a serial killer known as “The Tongue Eater” (Daniel Keyes), and oh yeah, a man-sized bat creature. These generic obstacles negligibly obstruct the go-nowhere trajectory of Nolan and his equally unmemorable buddies, all of whom are defined by the sort of creaky clichés that make “The Breakfast Club” seem downright avant garde. There’s Reggie (Zak Sutcliffe), a pouty rebel with a side shave and Doc Martens-looking boots, and Karl (Zander Emlano), the bratty, but good-natured fat kid who day-dreams about “double bacon, french fries … and a large drink”. As for young women: there’s nerdy Queenie (Molly Dew), who’s got baby fat and braces, and shy artiste Bess (Sophie Jane Oliver), whom Nolan inevitably draws the inner beauty out of (“I saw your sketches on the bus, I thought they were amazing”). All five kids must fend for themselves after kindly bus driver Joseph (Terence Anderson) leaves them with some bumper sticker wisdom—be brave, kids!—and little else.

The bat monster that hounds these kids looks cool enough, but he never really shakes his kiddy opponents up, armed as they are with hormones and courage and stuff. To be fair, Nolan’s crew has to fend off the world’s most boring bat creature, sleepy backstory and all. So I can’t really blame these kids for taking their time in poking around their bus’s nearby surroundings. Some sketchy sex jokes follow, like when Reggie shoots Karl a dirty look after Emlano’s character repeatedly (and vigorously) slaps his thigh in the dark. Or how about when Reggie teasingly threatens to watch Queenie urinate when she asks him to guard her from predators, like that Tongue Guy? (What’s his deal anyway?) Come to think of it, Reggie’s as close to a representative protagonist as “Shortcut” has got since he’s more of a placeholder than a symbol of youthful rebellion.

As for Nolan and Bess: screenwriter Daniele Cosci makes nothing of the fact that these two lovebirds are stalked by a hairy howler called “The Nocturnal Wanderer”’ on the night of a lunar eclipse. Nolan and Bess’s attraction is also as credible as Reggie and Queenie’s love connection, defined as it is by Reggie’s characteristic suavitude: “You are kinda cute when you're mad ... should piss you off more.” Even the most talented young actors can only do so much with wet blanket dialogue like when Nolan and Bess struggle to make a love connection, but only wind up saying things like, “My mum painted,” and “Like what,” and “All sorts of landscapes[…]with bluest sea, and amazing white sand.” Who thought that dialogue was ready to be filmed?

Or maybe a better question is: what exactly attracted the filmmakers to material like “Shortcut”? I’ve seen the film, and I’m still not sure. Maybe it’s the generations-old received wisdom that teenagers are more resilient than we think they are? Sure, but who exactly is “we” these days? “Throwback” would be a more accurate title for “Shortcut,” but even that doesn’t quite cover the movie’s retrograde nostalgia. 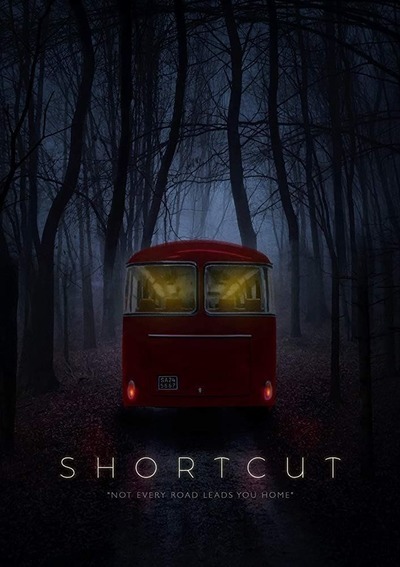 Rated R for language throughout and some bloody images.