A serial killer in a cop uniform ties up a prostitute, throws her naked body onto some train tracks, masturbates on her (to completion), and then videotapes her as she, wailing uncontrollably, is run over by a train. This is the opening scene in “She’s Just a Shadow,” a grubby Japanese-set crime thriller about a group of pimps and prostitutes who all struggle to remember why they like sex and drugs so much. I think it has something to do with physical addiction and/or psychological dependency, but the makers of “She’s Just a Shadow” have other theories, namely: binging is a way to fill the void caused by a vague sense of one’s own mortality.

Writer/director Adam Sherman’s apparent disinterest in his characters’ hang-ups is maybe best illustrated by his movie’s aimless plot. Most of “She’s Just a Shadow” follows two narratively related protagonists, though their respective sub-plots never intersect in meaningful ways. There’s Gaven (Kihiro), a sad-sack gangster lackey who wants to kick his cocaine habit and run away with one (or both) of his two disaffected, thrill-seeking prostitute girlfriends, Tanya (Haruka Abe) and Beth (Mercedes Maxwell). But Gaven doesn’t have the money or the will power to do much except hang around, do drugs, have sex, and follow orders. A charmed life; for him, at least. The same is basically true for “tired” (her words) and paranoid madam Irene (Tao Okamoto), who spends much of her time fantasizing about her family’s recipe for poison, as well as, uh, a blue sky and a disembodied pair of blue-tinted chattering teeth.

There are a number of reasons why Irene should probably be the main protagonist in “She’s Just a Shadow,” chief among them being Gaven’s aimlessly repellent character. She and Gaven are only united by a common milieu and general association with the unerringly selfish pimp Red Hot (Kentez Asaka).

Still, even though Irene’s story bookends the movie, Gaven is the one who’s constantly telling us what its world is like, especially through unbearably retrograde voiceover narration. “She’s Just a Shadow” belongs to Gaven who, despite repeated claims of being burnt-out, always seems to have enough energy to keep going, even as the above-mentioned killer (Ichi Omiya) continues to slay blissfully ignorant prostitutes.

Sherman’s emphasis on Gaven over Irene—or any of the other female protagonists—is especially obnoxious given this movie’s leer-y, image-obsessed focus on bubbly, superficial sex workers. Gaven speaks for his girlfriends and their peers when he dons a carnival mask and baldly explains “With the mask on, I can do anything, be anyone. With the mask off, I'm Gaven, an ordinary human being.” A rough start, but still somehow not as depressing as how much of Sherman’s movie illustrates the soul-less detachment of its supporting characters, all of whom tacitly subscribe to Gaven’s way of thinking, like when Tanya explains that there are essentially two kinds of love: “strawberry love” (sweet and immediately rewarding) and “Twinkie love” (non-perishable). Get back to me when it’s time to talk durian and Ding Dong love.

There isn’t a convincing link between Gaven’s voiceover musings and a myriad of scenes where semi-naked women—often clad in nothing but garishly overdone sequins, wigs, and spray tans—take selfies and inhale drugs. If these women were the objects of either Gaven or Sherman’s sympathy, they should probably be shown thinking or saying something more deep than “It’ll be cool to post this [on social media] later” or “Isn’t everything a digital effect these days?” These women aren’t presented as real people: at one point, Tanya begs Gaven to “please take me away from this horrible life,” but Abe doesn’t sound credibly desperate, just bored. I don’t believe her character, but I do believe that misogynistic dorm-room philosophers like Gaven exist, especially when he thinks to himself “Women: no matter how human they seem—they're not. They're just shadows. But on the other hand, aren't we all?”

Maybe it’s a good thing that Sherman didn’t saddle Okamoto with more screen-time or dialogue, especially given how wooden the expository dialogue she has to work with generally is (ex: “It was kind of confusing how I took over the black market and sex trade of the whole city”). Sherman periodically reminds us that he knows how out of touch his subjects are, like when Gaven whines that prostitutes are “still girls, with feelings,” to which Red Hot pouts “Yeah, maybe.” But learning that some men don’t really like women is only so insightful, especially in light of migraine-inducing dialogue like "If you have sex with a prostitute, you become a prostitute. Sex makes two bodies one flesh.” Please take me away from this horrible movie. 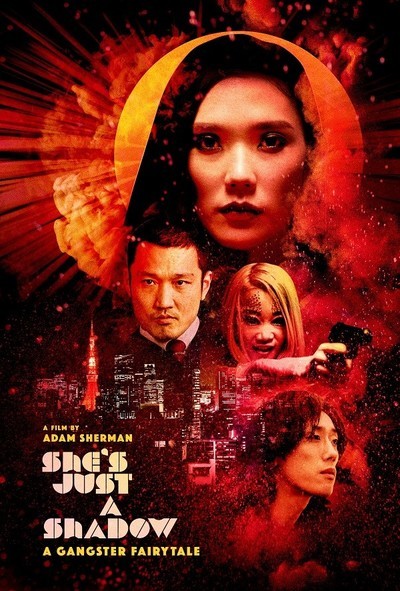