Sincerity of purpose, the best of intentions and brief appearances by top talent cannot save a real first pancake of a script in “Sgt. Will Gardner,” the story of a homeless veteran struggling with PTSD and traumatic brain injury. In other circumstances the producer, director, or star might have mentioned to the screenwriter that the numbingly mundane script staggers under the burden of its clichés, but in this case all of those positions were occupied by the same person, Max Martini, so that vital conversation about the necessity for another couple of drafts never occurred.

My high school creative writing teacher made us all promise that we would never write a story that began with a character pondering the meaning of life on the beach. It was not that this scene could never work, she explained, but she was confident that no matter how talented and sensitive each of us was, we did not have what it took to carry it off. If we had been writing screenplays, I am certain she would have added, “And please, please, do not have your characters recite a poem.”

That was good advice. Martini does not follow it. The first five minutes feature the title character (Martini) sitting on a beach as we hear him intone poetry in voiceover. And it’s not just any poem but “The Road Not Taken” (“I shall be telling this with a sigh…”) followed by the prayer attributed to Sir Francis Drake (“Disturb us, Lord, when we are too pleased with ourselves…”). We then get some flashbacks of Will and his unit under fire as in present day he is rousted from the house where he’s been squatting, and then we see him arguing with his employer (Robert Patrick) over back pay. The boss says no because Will took time away from the job to do pull-ups and read. Will says the VA doctor told him he needed to do that. The boss points out that he did not need to do that when he was supposed to be working.

Will does not like that, and so he steals the boss’ new motorcycle and goes off on a journey across country. The encounters along the way with other veterans and people from his past and a possible new romantic interest take up most of the story. Another bad mistake is that Martini’s character is presented as near-saintlike, with a powerful charisma that draws just about everyone to him.

Every once in a while there is a bright spot, most notably a scene with Gary Sinise as a sympathetic bartender and JoBeth Williams as a fragile barfly. Martini’s young son Leo plays the son Will has not seen for many years and he has a quiet dignity that adds some heft to their scenes.

But the male characters are paper-thin with one attribute each, and the female characters barely exist at all, the script foiling the best efforts of the talented cast. Elisabeth Röhm plays Will’s ex-wife, who is not allowed to have any response but heart-melting sympathy for a man who suddenly turns up without warning. Lily Rabe is stuck with the thankless role of a woman who impetuously quits her job and then becomes involved with Will for the preposterous reason that she mistakes him for a television star despite no actual resemblance.

There are more poems, too, but this is a very literal film. A woman not only lets down her hair to signal her freeing new lease on life; she tells us she is doing it. And unforgivably, a character nicknamed “Ghost” gets paired up with an actual ghost. By the time we get to the undeniably touching final shot, followed by the even more meaningful credit sequence statistics about homeless and suicidal veterans, we can only wish that instead of offering a third of the profits to veteran’s groups, including Sinise’s foundation, Martini developed a screenplay that paid more fitting tribute to those whose service protects our freedoms. 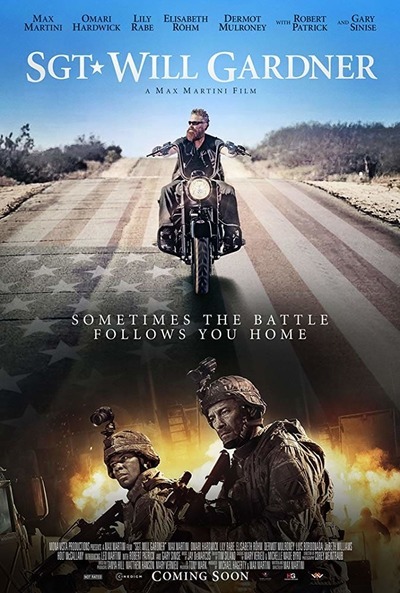 Max Martini as Will "Ghost" Gardner

Leo Martini as Will Gardner Jr.