A sort of “Marvel for Pre-Teens who Don’t Like Actual Superheroes,” the latest original offering from Disney Plus won’t make anywhere near as many headlines as “Hamilton” or “Mulan” did when they landed on the service. My most common feeling while watching it was one of surprise that it even exists, presuming it must have been designed as a long pilot for a TV series that never went to order on Disney Channel and is now being shuffled off to the streaming service, because nothing about this inert, dull project feels like a movie. It’s a half-idea, half-heartedly filmed. Yes, it’s a kids’ movie, but kids are smarter in 2020 about their action entertainment and putting this alongside all the Marvel movies on Disney Plus feels almost mean.

Peyton Elizabeth Lee is charming enough as Sam, the second-born princess in a royal family in the Kingdom of Illyria. If you’re expecting some sort of Narnia-esque vision of fantasy royalty, look elsewhere because the vision here is pretty much superficial. It’s a modern, slightly futuristic city, but “world-building” was literally never put on the whiteboard of the writer’s room for this project. Sam goes to school at a place called Strathmore with other royal teens and the opening act of “Secret Society of Second-Born Royals” (and doesn’t that title just roll off the tongue?) is basically a teen dramedy as the film introduces us to Sam’s friend Mike (Noah Lomax) and a vain mean girl named Roxana (Olivia Deeble).

Suddenly, Sam learns that she has an important destiny a la Harry/Katniss/Neo/etc. It turns out that second-born royals in this universe have superpowers, and so “SSSBR” shifts to what is essentially a young X-Men riff with Sam learning her powers under the tutelage of Professor James Morrow (Skylar Astin). Each student’s power reveals itself through a series of training exercises, and Sam learns that she has super senses. Her fellow second-borns, who have apparently all hit X-puberty at the same time, include invisible girl Roxana, power-stealing January (Isabella Blake-Thomas), persuasive Tuma (Niles Fitch), and nature-controlling Matteo (Faly Rakotohavana). The quintet is trained to control their powers just as the film’s Magneto, a telekinetic inmate baddie (Greg Bryk), escapes from his prison and comes after the school.

To say that Anna Mastro’s film has a pacing problem would be a drastic understatement. The opening chapter is fine enough because it allows Lee to carry the teen drama, but everything grinds to a halt in the midsection with a lengthy, boring training sequence. Imagine if the first X-Men film was an hour of the characters learning their powers. It’s numbing in a way that’s inexplicable other than to suggest it would feel different in a pilot of a series than it does as the majority of a feature film. It’s a film that just takes forever to get off the ground, running for an hour before anything approaching traditional superhero movie action happens, and even then it’s clunky and poorly done.

To say that I didn’t care about what happened to anyone in “Secret Society of Second-Born Royals” would imply that anything happens in the film. It is the most bare-bones superhero movie I’ve ever seen, entirely unambitious in its world-building, characters, and structure. The only thing that salvages it in any way is the relative charm of the cast. Lee could develop into a star, and I could see some of the other young actors doing the same. But they gotta stop signing on to second-tier projects. 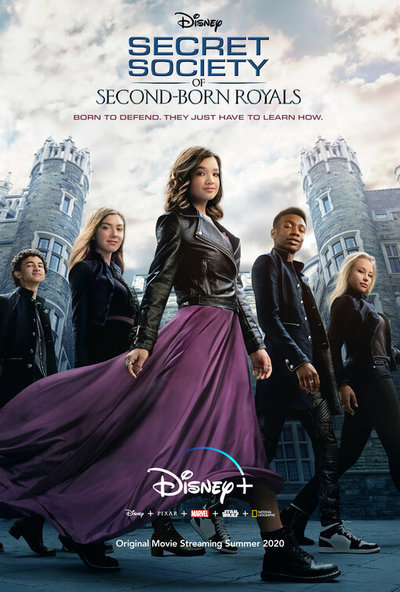