“Just looking at the incredible movement of a lizard or a bird, or even the smallest insect, can be a very humbling experience.”—Jim Henson

There is a space beneath a small outdoor balcony at my parents’ house that birds have annually used to build a nest. For many years, the same nest has been painstakingly remodeled by various birds eager to find a safe place for their babies to hatch. Anytime I venture into the backyard during the spring, the mother bird will wait patiently on a nearby fence or tree until I’ve left. Then I’ll often race to the window supplying a perfect view of the bird as she swoops back to the nest, ready to feed the ravenous gaping mouths of her chirping offspring. Observing our primal needs and connection with one another mirrored by our fellow creatures on this planet never ceases to amaze and humble me.

Of course, that makes me an ideal audience member for “Seasons,” the third installment of Jacques Perrin and Jacques Cluzaud’s trilogy of nature documentaries that began with 2001’s Oscar-nominated “Winged Migration” and continued with 2009’s “Oceans.” Perrin is a giant of the French film industry, having also earned an Oscar nomination for co-producing Costa-Gavras’ “Z,” while being widely known for playing the adult Toto in “Cinema Paradiso.” His soothing narration is used sparingly in “Seasons,” a wise decision that allows for long stretches in which the viewer becomes fully immersed within the wordless world of the animals’ habitat. As proven by another of this year’s notable French productions, Michael Dudok de Wit’s haunting animated fantasy, “The Red Turtle,” the naturalistic movement of characters—both human and animal—can convey a story more eloquently than dialogue ever could. Whenever Perrin’s voice reemerges, it marks not only the shifts in seasons, but in eras.

Though it is billed as a documentary, this film is more of a hybrid combining the expected footage of various species with staged scenarios featuring actors. We begin with blinding blizzards representing the ice age, where animals sported the same stubborn resilience they have later demonstrated in the face of potential extinction. The first hour is primarily devoted to recreating the “golden age of the forest,” where animals move freely amidst the dense wilderness without fear of invading humans. There is a plentiful “awww” factor here, with little deers making their first steps and baby wolves roughhousing with playful abandon, but this is not at all a Disneyfied view of nature. Gone are the contrived narratives used to hold the attention of family audiences, though the lack of contextualization can occasionally work against the picture. Nothing in “Seasons” is quite as memorable as the best moments of BBC’s “Planet Earth” and “Life” programs, the latter of which included a Vogelkop bowerbird that built an elaborate decorative sanctuary in order to attract females. In contrast, Perrin and Cluzaud’s film can grow rather repetitive, with the interactions between creatures being continuously limited to the predator/prey dynamic. Still, there are numerous thrilling sights to behold, such as a thunderous fight between horses and a majestic sequence of flying squirrels soaring across the trees at night. What the filmmakers are especially adept at is replicating the visceral sensations experienced by the animals, such as the swaying of a tree inhabited by critters as it creaks and quivers in the wind.

As awe-inspiring as this footage is, it’s every bit as amazing to envision how the filmmakers had to prepare for framing these moments with impeccable precision. A documentary about the making of a nature documentary would be hugely entertaining, as illustrated by the outtakes at the end of “March of the Penguins,” showing camera operators lugging cumbersome equipment through the frozen tundra. At many points during “Seasons,” I found myself wondering, “Just how, for example, does a cameraman know where to be positioned in order to capture the image of baby birds getting nudged out of their nest perched high in a tree?” There’s a camera placed at ground level that films a bird as it hurtles toward the ground, falling just to the left of the lens. Equally mind-boggling is the footage of a wild boar being chased by a pack of wolves, which are followed every step of the way by the camera. I’ll confess I was less concerned with the boar than I was with the camera slamming into the inevitable tree. Not only do we once again get those staggering bird’s-eye view shots seen throughout “Winged Migration,” we also get to follow the birds’ reflections as they caress the surface of the water while in flight. Topping that is a flying insect’s point of view that frankly seems impossible to have been achieved without the use of visual effects. I felt like applauding the title card in the end credits reassuring us that “no animals were harmed in the making of the film,” considering how many are eaten or shot on camera in very convincing fashion.

Existing just on the periphery of every shot is the world of man, which is hinted at fleetingly by the occasional arrow or lone figure until the final third, when the humans finally take over along with Perrin and Cluzaud’s overarching environmental agenda (no different from the one in “Oceans”). Some viewers will complain that the narration becomes too preachy, but I found it downright chilling, in light of how the seasons have recently become so distorted that the promise of a white Christmas is no longer a given. Perrin argues that humans have modified the climate to a perilous extent and have drained the planet of finite resources, though he believes that we actually possess the ability to repair much of what we have broken. As I watched hunter-gatherers stripping forests of layer upon layer, I was reminded of how the CBS Sunday Morning nature segments have gradually been pared down into such small soundbites that they are no longer capable of truly transporting viewers. Humans, alas, have emerged as the ultimate predators, and in “Seasons,” they remain appropriately faceless except for the child who dares to look nature in the eye. 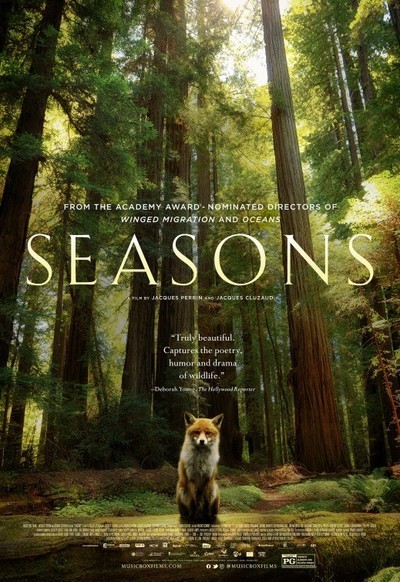