A waiter friend of mine once waited on a famous standup comedian, who had brought a large group of friends and family to the restaurant, celebrating some occasion. The bill came to thousands of dollars. The comedian tipped my friend 100%. He still speaks of it with awe. Waiters don't forget these things. You rely on tips. You remember who tips well. You curse those who don't.

The inciting event of "Satanic Panic," a new horror-comedy directed by Chelsea Stardust, is very relatable: A wealthy jerk doesn't tip Samantha (Hayley Griffith) who delivers pizzas to his mansion her first night on the job. Incensed at being stiffed, Samantha barges into the house (if you've ever worked for tips, you have probably wanted to do something along these lines!) and finds herself smack-dab in the middle of a coven performing some Satanic Cult Ritual. Things go south from there. When they discover Samantha is still a virgin, they drug her and lock her in a room. They need a virgin for an upcoming ritual. These red-robed one-percent-ers mean business.

"Satanic Panic" is Stardust's directorial debut, although she has extensive experience behind the scenes in horror films. She knows the territory well. Produced by Fangoria Presents, the film is meant to be a throwback—or revitalization—of the B-movie gore-fests brought out by Fangoria in the '80s and '90s for an audience who couldn't get enough. With "story by" Ted Geoghegan and Grady Hendrix, "Satanic Panic" is fairly uneven, with wild tonal shifts, and many awkwardly-staged moments lightened up by a sick—and occasionally intelligent—sense of humor. A couple of times I laughed out loud. The script repeatedly points out the vast class difference between the coven members in their mansions and blue-collar Samantha, and these moments give the film its bite and humor. (Even in the middle of being chased by a group of Satanists, Samantha has the presence of mind to ask a babysitter who harbors her in a nearby house, "How much does babysitting pay?")

As Danica, the head witch, draped in a bright-red gown with matching lipstick, Rebecca Romijn gives a very perverse and funny performance, all icy intimidation and glamorous power. Whether she's chewing on a heart, pulling out someone's guts, or praying with fervent solemnity: "O triple-headed fuck-monster of remorseless intent ..." her commitment is total. She makes a great villain. Romijn's real-life husband, Jerry O'Connell, plays Danica's drugged-out husband, banished to an upper room of the mansion. In O'Connell's sole scene, he offers to save Samantha by taking her virginity. It kind of makes sense: If she's not a virgin anymore, the coven will lose interest. Only clad in his underwear, he ends up chasing her around the room, begging her to have sex with him. (The fact that this scene plays comedically is a testament to everyone involved.)

A lot of care has gone into the gory practical effects, many of which are not just gross but creative and funny. Characters die in grotesque and innovative ways. My favorite was a scene involving a gigantic cork-screw strap-on dildo-apparatus—it's as horrifying (and comical) as you would imagine.

But there's a feeling that more could have been made of all of this, that something's missing in the execution. What might be missing is an overriding mood of total free-wheeling insanity. "Satanic Panic" is best when it lets its hair down, when it devotes itself wholeheartedly to the ridiculous, the entertaining, the silly and gross combined. But it doesn't push any envelopes, and pushing envelopes is what it's all about! The real envelope-pusher here is Romijn. Her performance, simultaneously loopy and stone-cold serious, shows what's missing in "Satanic Panic" as a whole. 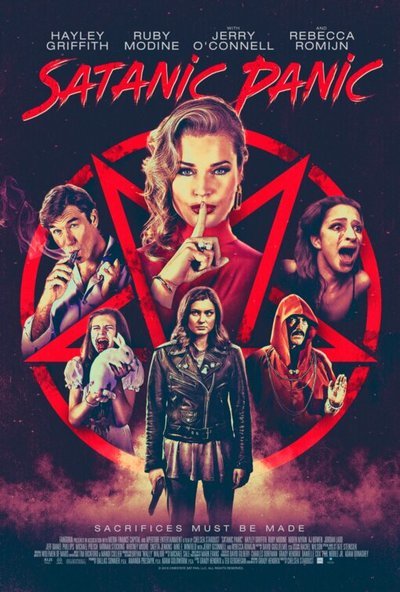