Although its title might seem to promise an outdoor action drama, Elite Zexer’s “Sand Storm” mainly takes place behind closed doors in a Bedouin village in the Negev Desert. The drama turns on the ways men in a tradition-bound Arab culture enjoy the benefits of a way of life that oppresses women, who in turn oppress each other. In short, it’s a fairly familiar critique of patriarchy from a humanist and feminist perspective, but one put across with some very impressive filmmaking skills by a first-time director.

What "Sand Storm" shows and dramatizes comes across as persuasive and finely wrought. But it inevitably leaves questions about what’s not shown or examined, which keep it from being fully satisfying. For one thing, the village culture at the film’s center is presented with very little context, and the story’s central family seems oddly removed from a larger network of relationships and influences that would normally be implicit to such lives. For another, the fact that Zexer is a Jewish Israeli can’t help but make some viewers wonder how people from the world that’s depicted would view her critique of their culture.

As it opens, the film makes the point that this culture has plenty of contact with modernity, at least in various superficial ways. On a desert road, gruff paterfamilias Suliman (Hitham Omari) gives a driving lesson to his teenage daughter Layla (Lamis Ammar). Such a practice surely marks the girl as belonging to a different world than previous generations, as do her cell phone and the fact that she’s attending university.

But back at the family home, things aren’t nearly so forward-leaning. Suliman is about to take a second wife and his first, Jalila (Ruba Blal), is obliged to stage the wedding celebration. Jalila is a grounded, determined sort and shows no outward resentment at the traditional imposition of not only having to share her husband with a much younger woman but of having to roll out the metaphorical red carpet for her too.

As the wedding preoccupies her, Jalila also discovers from Layla’s cell phone that she’s apparently carrying on a romance with a boy at her school. Mother comes down hard on her daughter’s indiscretion. However innocent it may be so far, the relationship violates two cardinal rules in this culture: women are not supposed to fraternize with men they’re not related to, and they’re expected to marry within their tribe—often in unions arranged by their elders rather than stemming from love.

When Suliman returns from his honeymoon and begins to set up a separate household for his newest bride, these problems come to a boil. Layla’s boyfriend Anwar (Jalal Masrwa) arrives at the family compound and tries to convince Suliman how honorable he and his intentions are. He might as well be talking into the desert wind. Suliman may love his daughter but he looks at things the old-fashioned way, and soon announces he’s got the perfect groom for Layla, a proposition that seems motivated by some vague business consideration. (Needless to say, the new candidate isn’t nearly as attractive as the young and very good-looking Anwar.)

While Layla’s woes and Suliman’s imperious exercise of paternal authority dominate the story’s latter sections, Jalila is its most important and most fascinating character. Thanks in part to Blal's extraordinarily skilled and convincing performance, we see how women can bitterly execute their duties without complaint but vent their frustrations on other family members, including females who will be expected to bow to long-standing customs no matter how much they may disagree with them.

Men like Suliman end up looking vain and weak, because they’re propped up by an authority that’s handed down to them rather earned. Women like Jalila—and in future, perhaps, Layla—are much more powerful characters due to their resilience under harsh burdens, even if their dignity seems a small reward for their constricted lives.

Zexer reportedly studied Bedouins for years before making “Sand Storm,” and there’s a feeling of anthropological exactness to many of its details. But religion is a crucial absence in the film’s world, which feels very inexact; and, as noted, there’s hardly any indication of the larger cultural and political realities that surround this desert microcosm. Zexer, however, has sure instincts in staging scenes and directing actors, and Shai Peleg’s crisp, realistic cinematography helps make the film visually involving throughout. 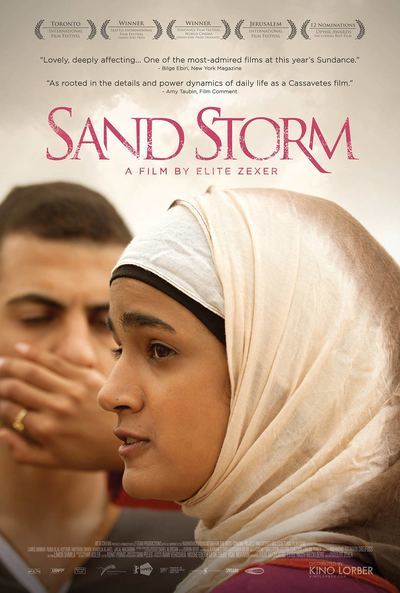