“Samson,” the latest cinematic incarnation of the famous Biblical story, is a film that frankly wants to come across as a tribute to the big religious epics that Hollywood cranked out during the ‘50s and ‘60s. Personally, I have always had a soft spot for such films, partly for the cheerfully shameless manner in which they blend the key elements of sex, sin and salvation, and partly for the moments of genuine power and grace that would occasionally shine through the luridness. The problem with “Samson” is that while it cannot be faulted for its sincerity, it can be faulted for its sluggish pacing, inconsistent performances and lack of cinematic style that gives the proceedings a tacky feel throughout.

Set in Gaza circa 1170 BC, the film opens with the Hebrews enslaved by the Philistines, led by the vile King Balek (Billy Zane … yes, Billy Zane) and his even more monstrous son Rallah (Jackson Rathbone). The Jews do have an ace in their pocket in the form of Samson (Taylor James), who was the product of a miraculous birth that foretold that he would one day lead his people to freedom with the aid of his gift of superhuman strength. However, Samson is not so sure about all of that—he has pledged to follow a pious life (one that forbids drinking alcohol, touching the dead or cutting his hair) in thanks for his God-granted gifts but thinks that there must be a more peaceful way for his people to deal with their oppressors. This attitude does not endear him to his mother and father (Lindsay Wagner and Rutger Hauer) and they are even less thrilled when he announces his attentions to marry the beautiful Philistine Taren (Frances Sholto-Douglas). Unfortunately, Rallah has by now recognized Samson to be the warrior destined to overthrow the Philistines and decides to wreak havoc at the wedding, leading to Samson finally calling on his powers and single-handedly delivering a beatdown of hundreds of Philistine soldiers armed with nothing but the jawbone of a donkey.

The story picks up “Many Years Later,” and we learn that the now-extremely-hirsute Samson has accepted his position as the leader of the community, though he would still prefer to make a deal with King Balek than start a war. When his attempt at negotiation fails and leaves him on the run, he is rescued by Philistine Delilah (Caitlin Leahy), who offers to hide him. (“I have a house in the Valley of Zurich.”) What Samson doesn’t realize is that she is doing the bidding of Rallah, who wants her to deploy her seductive wiles in order to ferret out Samson’s key weakness so that Rallah can finally conquer his enemy once and for all. From this point, most of you can probably fill in the blanks as to what happens next. If you don’t know the story, be prepared for any number of surprises.

“Samson” was produced by Pure Flix, an outfit that has had great success in recent years making and marketing a string of faith-based hits like “The Case for Christ” and the “God’s Not Dead” trilogy. With “Samson,” they have gone a different route by eschewing their template of modern-day parables made with a strangely adversarial tone (one pretty much suggesting that anyone not precisely in line with their way of thinking was instantly doomed to damnation) for a period tale and a more open and accommodating approach that welcomes outsiders instead of castigating them. That change alone makes “Samson” somewhat easier to sit through than its predecessors, at least for the non-faith-based crowd, but does not make up for the fact that it is pretty shaky in a number of other areas. To put it as delicately as possible, director Bruce MacDonald is no Cecil B. DeMille and his attempts to match the grandeur of Biblical epics of old mostly end up falling flat. There is zero dramatic tension to be had at any point and the presumably low budget is felt throughout in things ranging from the obviously fake beards worn by some characters to symbolize the passage of time to the equally chintzy special effects on display throughout. The big acton beats are uniformly awful—the battle in which Samson defeats hundreds of soldiers is staged so goofily (including lots of slow motion) that it almost looks like the Mel Brooks version of such a scene and don’t get me started on the unintentionally hilarious staging of the scene where Samson wrestles a lion.

As Samson, James more or less looks the part but too often comes across like a sullen bore in his attempts to show the character’s sense of inner turmoil between living the life foretold for him and his desire to make his own way. Playing Delilah, Leahy will not make anyone forget Hedy Lamarr (or even Elizabeth Hurley, who played the part in a 1996 TV movie) anytime with her bland take on the role and the minuscule number of sparks that she strikes with James. On the other end of the spectrum, Rathbone is clearly trying for a sort of knowing campiness with his over-the-top work as Rallah but the results are more cringe-worthy than entertaining. Among the more familiar faces on display, Lindsay Wagner and Rutger Hauer have precious little to do as Samson’s parents while Billy Zane turns out to be the best thing in the film by contributing a performance that seems to have been inspired by, of all things, Marlon Brando’s portrayal of Kurtz in “Apocalypse Now”—he is ridiculous, no doubt, but at least in his case, it is a fun type of ridiculousness.

Will “Samson” satisfy the faith-based audience that is clearly its key demographic? Perhaps, assuming that all they want is a simple retelling of a familiar story that doesn’t threaten by bringing anything new to the table. Those whose concerns are more cinematic than ecclesiastic, on the other hand, will find it to be a sincerely made but largely uninteresting and sadly cut-rate take on the tale. Whatever artistic sins the DeMille may have committed, it at least deigned to be interesting enough to hold the attention of devout and secular audiences alike. This one, on the other hand, is such a drag that viewers of all faiths will find themselves wishing that Delilah and her scissors could have somehow found her way into the editing bay and done everyone a favor. 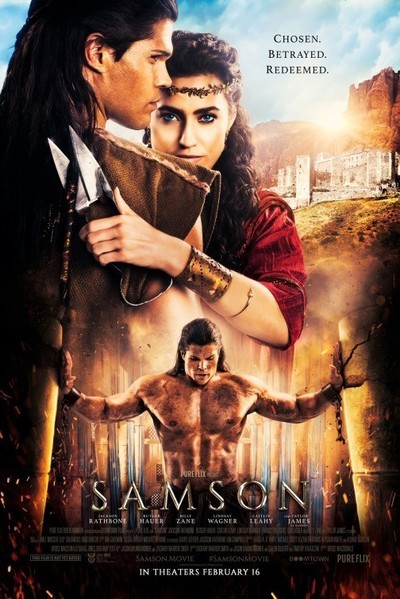