Same Kind of Different as Me

“Same Kind of Different as Me” is a top nominee for the Nice Movie of 2017, in that it just wants to exist and be kind when not trying to extract tears from its audience like test subjects. Spiritually, it feels relatively tame compared to other religious movies, as it doesn’t proclaim that “Heaven is For Real” or “God’s Not Dead,” but it does use the Bible as a moral compass on its bland journey of selflessness. Its biggest risk is that it might alienate members of the KKK, but in this climate the film’s producers might think that’s ballsy enough.

Based on the bestselling book, which inspired both a sequel and a children’s adaptation, “Same Kind of Different as Me” is the true story of a wealthy Texas white couple, Ron and Debbie (Greg Kinnear and Renee Zellweger), who befriend a violent homeless man (Djimon Hounsou). He calls himself Suicide, but is actually named Denver. Debut co-writer/director Michael Carney doesn’t have much of an eye for any of this saga, which includes a “Blind Side”-like narrative that transitions into a weepy sickness tale fit for Nicholas Sparks that I won’t spoil, but the true story aspect is a type of preservation itself. It can be hard to disagree with the heart and events of this true tale, except for when the movie reveals itself to be mighty self-congratulatory.

The book, which features the “voices” of Ron and Denver as organized by their co-author Lynn Vincent, makes a point of starting with Denver’s narration before then going to Ron, as Denver shares a horrifying racist episode from his youth that’s featured in the middle of the film. But instead of feeling like the story belongs to both men, this movie is told from Ron’s perspective, framed as the tale of a Texas art dealer who knew a great woman who helped introduce him to a sidekick. Ron is brought into the world of taking care of homeless people as a type of penance after Debbie catches him cheating; she takes him to a shelter in a less-loved part of Fort Worth, which leads to a lot of plainly “nice” scenes in which Debbie and/or Ron interact with homeless people, treat them like human beings. One night, Debbie dreams of walking through a field and seeing a black man, the type of straight-faced narrative detail that proves to be a big deal in a movie like this.

That mental image soon barrels into the movie in the form of Suicide, literally with a baseball bat in hand as he tears up the homeless shelter's cafeteria. Scene-by-scene, as Ron & Debbie reach out to him by acknowledging him and feeding him, the intense man loses the thick exteriors and offers perfect wisdom after perfect wisdom. He is later welcomed into their home, and their social lives. We learn, through monologues accompanied by flashback, about Denver's truly unbelievable past: that he lived in Louisiana and picked cotton in what was essentially slavery, completely removed from the civil rights movement or any such modernity; that he was beaten by KKK members as a teenager, and later went to prison for trying to rob a bus in Shreveport. Hounsou's scraggly voice shares these stories through extensive monologues as Kinnear and Zellweger listen, with Hounsou doling out precise line-reading and tears. True to the hollow cinematic spirit of this movie, Carney can only accompany with bland flashbacks or stubborn modern-day close-ups that soak us in Hounsou’s wet eyes.

The film gives a strong juxtaposition of why Ron & Debbie and Denver would be unusual as friends, which makes for a sweet spot in the middle when Denver is shown hanging out with them. The scenes are cringeworthy to be sure, like when one of Ron’s peers at a country club calls Denver an “amigo Negro,” but the shimmer, that value of “nice” is prominent, as performed by three capable actors. In fact, in many instances, Kinnear, Zellweger and Hounsou make the production seem like it has more soul than the sappy strings, wholesale dialogue and lazy filmmaking would suggest.

It should be said that Hounsou gives what is hands down one of the most intense performances that these modern religious blockbusters will ever see. Actors of all religious ideology levels, from shoulder-shrug to Uber Kirk Cameron, find their way into these moral melodramas as mere projects, with inconsistent spiritual or artistic inspiration. Just look at Jon Voight in this film, who phones in a curmudgeonly drunk performance that makes for a weak subplot about being forgiven by his son, Ron. But Hounsou recognizes something volcanic in this character—a profound soul who has survived many lifetimes, alone; Hounsou believes something about this story that others do not. In turn, he provides a performance with an intensity this project doesn’t deserve and in turn doesn't know what to do with.

As the story ambles along, focused most of all on heart strings, Denver’s shallow purpose to the film is revealed. His narrative duties are limited to telling a sad story from his past, crying, and making his new friends feel all that more assured about what they have done. Whenever Denver offers wisdom, including a perfect speech at the end where this movie gets its title, and then takes a spot to the side, his handling gets all the more tedious. While there is a fascinating story within here of an unlikely connection between a married couple and Denver, “Same Kind of Different as Me” would rather make it specifically and obnoxiously about the selfless, magical white people and the human being who benefited from their kindness. It’s worse enough that the story dulls down the spirit of Ron and Debbie; it’s even more gross how high the story tries to prop up Denver. 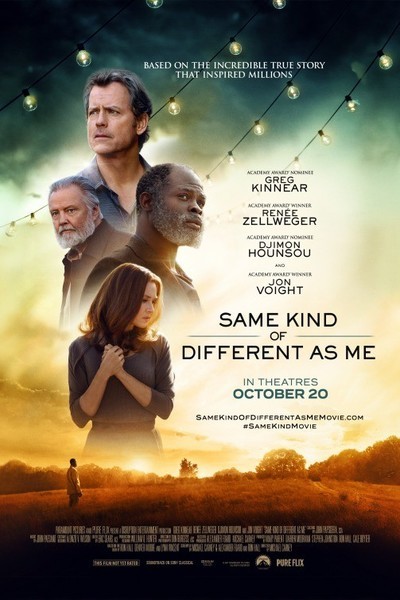