Bad movies are common. Shockingly bad movies, ones that are so incompetently conceived and executed as to force one to question how they got made, are less so, despite what Angry Film Twitter might have you believe. “Safelight” is a jaw-droppingly bad movie, a film that doesn’t have characters or a plot. It has mouthpieces who speak in platitudes and clichés, pushing forward through a predictable, depressing narrative that sounds like a flunked high school student’s attempt at creative fiction. To write off “Safelight” as just another generic romantic teen drama about wounded souls who find healing in each other’s arms wouldn’t do justice to its baffling ineptitude.

“Safelight” is about the shy, crippled boy and the hooker with the heart of gold who change each other’s lives. If you’re asking yourself, “Do they still make that movie?,” “Safelight” is here with an answer. Evan Peters (“American Horror Story”) stars as Charles, a bullied 17-year-old who works at a truck stop with a wisecracking Christine Lahti and, from the looks of it, no actual truckers. Charles is drawn to the lone hooker who works this lonely locale, Vicki (Juno Temple), an 18-year-old with a violent pimp named Skid (Kevin Alejandro). Apparently when they were handing out tough pimp names, he was absent.

Charles' mom left when he was a baby. Charles’ dad is dying. Charles’ brother is dead. Charles wants to take photographs of the California lighthouses, something his sibling was going to do before he died. “He really liked the idea of light guiding people home.” Yes, “Safelight” is one of those films in which every conversation and every action must play into the arc of the healing-romantic-drama. Nothing registers as genuine. Peters and Temple have zero chemistry and writer/director Tony Aloupis doesn’t even seem interested in their romance, ignoring the sexual undercurrents that could have formed a coming-of-age story for Charles and even dismissing the idea that Vicki could have found real love instead of the paying kind. He's too busy talking about lighthouses. Every opportunity for real dramatic stakes in “Safelight” seems to have been considered and then ignored. And as Charles and Vicki get closer, “Safelight” gets less and less genuine. They’re all caricatures, from the pimp who cackles like a maniac to the dying father with the sage advice for his shy son.

Caricatures are bad enough, but even the tropes are poorly executed here. The dialogue is forced, stilted and unnatural. At times, it’s hard to believe performers like Temple and Peters, who generally make smart decisions, could force this dialogue out of their mouths given the weird rhythms of the piece. Imagine reading greeting cards in a dramatic scene. It wouldn’t sound right coming out of your mouth. The cadence of normal speaking patterns isn’t even here.

Like the pictures that Charles takes of lighthouses, we’ve seen “Safelight” before. And it was pretty boring then too. Charles actually says about his photography and people in general, “If you look at it long enough, you get to see what it’s really showing you.” “Safelight” illuminates nothing. 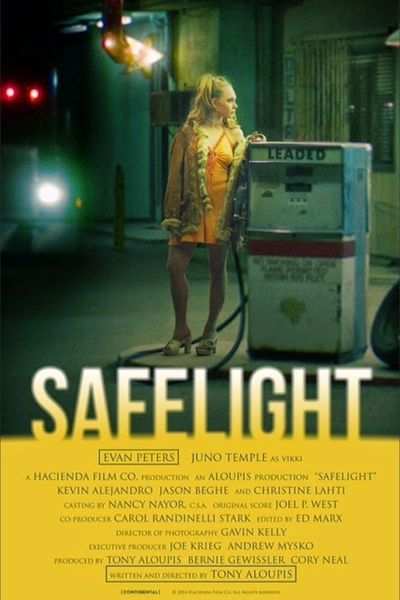 Rated R for language throughout including some sexual references