"Sacrifice" is a unique kind of very bad movie. The spectacle of this misbegotten thriller is not amusing enough to recommend to fans of casual movie cheesiness, but it’s the filmmaking choices that made me laugh out loud. This movie should be taught in film school—just as Hitchcock movies can teach filmmaking, so can their failed imitators provide us with elementary examples of when technique goes horribly wrong.

Dr. Hamilton (Radha Mitchell) moves to an intimate Scotland island to adopt a baby with her husband Duncan (Rupert Graves) after suffering four miscarriages. One day, she discovers a corpse in her backyard that’s missing a heart and is marked up with strange symbols; she later realizes that the female body must have been killed shortly after giving birth. As she investigates the body and its markings, she faces opposition from the island's patriarchs, who try to convince that she is being paranoid. Soon enough, she gets to the center of a conspiracy involving missing women and a secret father-son society. Right at about the 45-minute mark, Mitchell sums it all up in perfect, disastrous fashion: “All I’m saying is there is something weird going on on this island that you can't just ignore.”

"Sacrifice's" take on suspense is constructed from familiar Hitchcock themes, including an ordinary person flung into paranoia while exploring a secret society, with writer/director Peter A. Dowling hoping that the suspense will be guaranteed by the plot. But he distills everything down to unimaginative information, whether in expository dialogue ("Why the 12 months before we can adopt the baby?"), checkpoint dialogue (“Okay, so you’re going to turn your back on a sacrificial murder?”) or shots that linger on something Very Important (a set of keys). By having no artistry of its own, “Sacrifice” inspires re-appreciation for Hitchcock's craftiness in creating intellectual energy, especially for stories that rely a great deal on both an articulate script and camera.

Cinematographer David Grennan gives a functional aesthetic that makes “Sacrifice” look like a genuine movie, despite many other elements rebelling against this qualification. Because of its direction, the style ends there: when it ventures for an iconic split-diopter shot à la Orson Welles or Hitchcock fanboy Brian de Palma, a scowling man in the left background has no sinister effect while Mitchell, on the other side of the screen and also in the focus, tries to feign uneasiness. The overall vision is so empty that a score by Benedikt Brydern can only provide instructions as to how a scene like a car chase is meant to be thrilling, or its resulting ball of fire a tragedy.

Dowling's movie only lacks a Tommy Wiseau or Neil Breen-esque lead performance to contextualize everything as misdirected vanity. Instead, Mitchell is at the center of the project, giving the proper amount of thespian energy to a script with no vision, which is to say not that much. She gets out of the movie alive just barely by making it seem like it has energy, or that true terror lurks in her close-calls with baddies.

To be fair with Dowling, the rushed quality of “Sacrifice” is suspicious. No right-minded director would choose this film’s opening credit sequence, which through smoke and overly menacing strings foreshadows key props like big pieces to a very easy puzzle. The same goes for the final shot, which concludes with an abrupt fade to black. And nearly every scene in between has an abbreviated quality, making its delivery of information all the more lifeless.

However, no egregious edit can explain its inciting incident, which is one for the books. Mitchell’s Dr. Hamilton sees a dead horse in her backyard, and then notices a load grabber nearby. She then decides to dig a really deep hole and step inside it, only to find the dead body. Unless there’s a montage missing of her farm equipment training, or a detail about her sixth sense with horse corpses, Dowling's script was itself incomplete. “Sacrifice” could very well be the rare-discussed lesson you don’t get in film school: of how a film was saved from a worse fate by being taken away from its director. 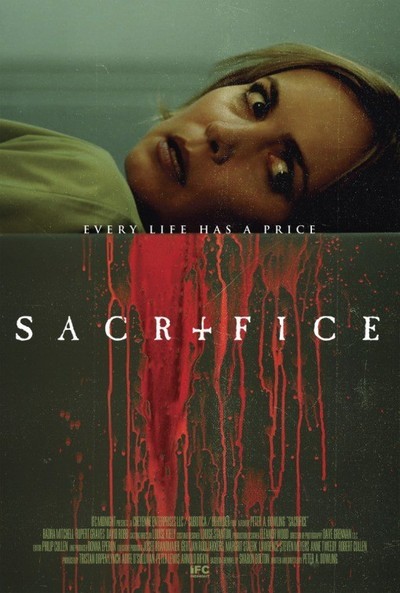