Underneath his 1929 painting of a curved pipe, René Magritte announced in swoopy cursive: "Ceci n'est pas une pipe" ("This is not a pipe"). His point was that you could not pack this particular pipe with tobacco, you could not smoke said pipe. It was a representation only. The painting is known mostly as "This Is Not a Pipe," but Magritte's title for it was far more interesting: "The Treachery of Images." "The Treachery of Images" could be the subtitle for Slovenian-born Milorad Krstić’s animated film, the zippy-glamorous art-heist caper "Ruben Brandt, Collector," in which an "art therapist" is - quite literally - attacked by the paintings he loves.

One of the intense pleasures of "Ruben Brandt, Collector" (astonishingly, it is Krstić’s first feature) is how it suggests that theft (i.e. "collecting") is the only way to manage obsession. By hanging these paintings on his wall, Ruben Brandt hopes that their "treachery" will be neutralized. Any art-lover, or collector, will probably relate. Ruben engages a merry band to steal some of the world's most famous paintings. With a fast-paced story spanning the globe, and images like a fluidly-undulating art-literate acid flashback, "Ruben Brandt, Collector" is like "To Catch a Thief" as filtered through the multi-eyeballed gaze of Joan Miró, or "The Pink Panther" as imagined by Pablo Picasso. The film is lighthearted but not frivolous, and the animation -- a mix of computer-generated and hand-drawn -- is so innovative and fun it's always a pleasure to look at the screen. It's an art history survey course, with linear timelines abolished. Eras and styles merge, Warhol alongside Diego Velázquez, Gauguin side by side with Roy Lichtenstein.

Featuring pit-stops in Paris, Tokyo, Venice, Rome, "Ruben Brandt, Collector" has the effervescence of a 1960s comedy-mystery-thriller, a hybrid difficult to pull off and not really in vogue now in our oh-so-solemn age where James Bond has to be gloomy and scowling in order to be taken seriously. But James Bond isn't serious and "Ruben Brandt, Collector" is like an early James Bond, complete with a cheeky sense of humor: glamorous people driving gleaming sports cars, chasing each other around hairpin curves, all converging on the same spot, all after the same big prize.

Ruben Brandt (voiced by Iván Kamarás) runs an art therapy institute, known for his gift in treating those with "artistic souls." But this physician is sick as well. Every night he is bombarded by violent dreams. The black cat in Édouard Manet's "Olympia" sinks its teeth into Ruben's face and won't let go. Frank Duveneck's whistling boy torments him. Botticelli's Venus strangles him with her blowing hair, and plunges him beneath the surface of the water (where he is then attacked by a murderous version of the sea-witch in "The Little Mermaid"). Velázquez's "Infanta Margarita" transforms into a toothy monster. One of the figures in Edward Hopper's "Nighthawks" smashes his face against the plate-glass window of the all-night diner. Ruben is haunted and distracted and his patients set about to help heal their physician. Mimi (Gabriella Hámori), an acrobatic burglar with green lipstick and eyeshadow, is the ringleader. Her thefts have already dazzled the world, as well as caught the attention of movie-mad Mike Kowalski (Csaba “Kor” Márton), determined to track her down.

Every frame is overwhelming. The characters all look like they have strolled out of Picasso's dreamworld (one of the thieves wear two pairs of sunglasses for his four sets of eyeballs). Kowalski's partner has two faces, one on the front of her head, one on the back. One character is literally two-dimensional, making art theft a cinch for him since he can slide underneath doors. The landscapes they zip through are a constantly-changing pop-art emanation, as though the history of art was tossed up into the air, and the movie cavorts among the randomly falling pieces. Every wall is covered with posters, Soviet propaganda, movies, cheap art prints. Hitchcock makes a cameo. In one chase scene, the characters suddenly find themselves running through the urban-fascist landscape of a De Chirico, before passing out of it. There's a nightmare sequence - so loopy and inventive I laughed out loud -- where Ruben is in a standoff from out of an old Western with Andy Warhol's gun-holstered "double Elvis," while an entire Coliseum chants for blood. Tibor Cári's score is a constant, urgent and energetic, moving us from dream to reality into fractured reality back into the dream.

If you're literate in art, or literature, or films, or any art form ... reality comes filtered through these works of art. For example, it's hard to look at water lilies in a pond and not think of Claude Monet. If you've ever gone out for coffee in New York at 2 in the morning, you'll think of Hopper's "Nighthawks." If you know the painting, it's gotten inside of you, it's taken hold of your imagination, it becomes a reference point. Even if you wanted to get rid of it, you would not be able to. It’s there. Krstić pushes this common experience to its most hallucinatory and entertaining limit. 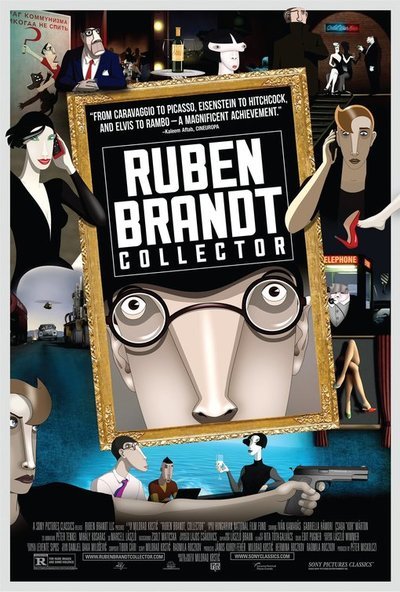 Rated R for nude images and some violence.