The talking heads featured in "Rubble Kings," a fascinating documentary about the proliferation of New York City street gangs during the 1970s, are gifted talkers. That makes up for a lot of the gaps in their knowledgeable, but essentially sanitized narrative, a sensational, but unbelievably hopeful story about the triumph of grass-roots activism.

Director Shan Nicholson takes special interest in the ubiquitous South Bronx gangs that materialized after the Cross-Bronx Expressway caused the borough's middle class (and predominantly white) residents to flee upstate. So while "Rubble Kings" features cultural figureheads like former Mayor Ed Koch and hip-hop pioneer Afrika Bambaataa, the film focuses on Ghetto Brothers founder Benji "Yellow" Melendez and Ghetto Brothers president Carlos "Karate Charlie" Suarez. That myopic focus is sometimes frustrating since Nicholson never presses his subjects hard enough to get them to answer follow-up questions. But "Rubble Kings" is an exciting glimpse at a subculture that most urbanites only know exists thanks to NYC-sploitation gems like "The Warriors."

In "Rubble Kings," Melendez and Suarez paint a simple but believable picture of a city on the verge of self-destruction. Suarez, the more volatile of the two speakers, calls attention to the assassination of unifying political leaders like John F. Kennedy, Martin Luther King Jr., and Malcolm X. Without these pacifying figures, wide-spread, aimless anger spread swiftly across the city, leading to a huge rise in gangs and gang-related violence. This reading of events is supported by expert testimony from Professor Marshall Berman and social activist Felipe Luciano, who talk about symptomatic criminal activity, like drug-dealing (particularly heroin), and arson. "Crime was the major industry of the Bronx," suggests an especially glib (but essentially accurate) interviewee.

Enter the Ghetto Brothers, a gang that, according to Melendez, once included about 2500 members in the Bronx alone. The Ghetto Brothers are to the Bronx what the Mafia originally were in Sicily: both were self-appointed, extra-legal community defenders who disrespected authority figures (i.e.: the NYPD, and the carabinieri) because those officially sanctioned groups were not popularly recognized in their respective communities. The main difference between these two groups is that the Mafia didn't originally destroy public property, commit crimes for profit, or prey on civilians. That aspect of NYC gang culture isn't discussed, making it hard to be totally convinced when Melendez and Suarez's talk about how they united their community.

Realistically, Johnson puts too much emphasis on Melendez and Suarez's free-wheeling testimony. He doesn't do enough to reign his subjects in, so some stories are full of tantalizing details that are never fully explained. There are hints of a veritable cosmos of city gangs, but their distinct qualities are not discussed beyond a brief spot-check of notable groups, like the Savage Skulls, Golden Guineas, Harlem Turks, and (my personal favorite) the Jolly Stompers of Brooklyn. And initiation rites are touched upon, but not fully discussed, not even when Melendez mentions hazing newbies by having three guys beat up a pledge for as long as a .45 LP played. And the role of women in street gangs is broached, but lady gang members' supposedly equal status is conveniently forgotten once gangs like the Ghetto Brothers rallied together to serve their community.

Gang life is, as even Melendez and Suarez admit, about blind anger, and therefore not really glamorous. There are times when experts stop talking about their macho escapades (apparently, one gang's invitation rites involved loaded .32 pistols), and mention that there were innocent casualties. "There were no civilians," one interviewee rationalizes. "You had to be in it, or you were a victim." So it's hard to accept the sudden transition Melendez and Suarez made from community terrors to community leaders. How exactly do you make a speech that makes an assembly of belligerent warlords—the kind whose internal policies are carried out by guys who wear the rank of "gestapo" with pride—willingly lay down their arms, and join together in community outreach work?

The only convincing answers that Nicholson offers are implicit to Melendez and Suarez's charming interviews. Melendez and Suarez's boasting reveals a prideful defensiveness that's unique to native New Yorkers. These guys are lifers, and you can tell by the way they talk about the city, and romanticize it all out of proportion. They're very approachable, and talk about everything, from broken jaws to Martin Luther King's assassination, with bracing candor. Had Nicholson taken advantage of Melendez and Suarez's seemingly easy-going nature, "Rubble Kings" might have been great. As it is, the film is a one-sided, but satisfying tribute to an alternatively terrifying and beguiling city that we can only revisit in movies. 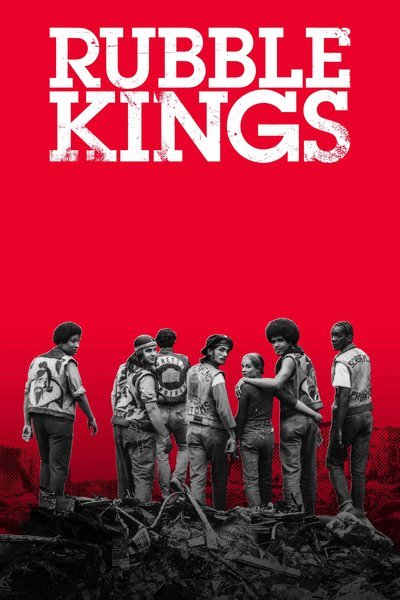