The Telugu language Indian action epic “RRR” (short for “Rise Roar Revolt”) has returned to US theaters for an exceptional one-night-only engagement on June 1st following its initial theatrical release. Some hindsight has made it easy to guess why writer/director S.S. Rajamouli has only now broken through to Western audiences with “RRR” despite his consistent box office success. Rajamouli’s latest is an anti-colonial fable and buddy drama about the imaginary combo of two real-life freedom fighters, Komaram Bheem (N.T. Rama Rao Jr.) and Alluri Sitarama Raju (Ram Charan). “RRR” is also a fine showcase for Rajamouli’s characteristic focus on maximalist action choreography, overwhelming stuntwork and pyrotechnics, and sophisticated computer graphics.

By the time he made “RRR,” Rajamouli had already developed his brand of Nationalistic self-mythologizing with some help from recurring collaborators like regular story writer (and biological father) Vijayendra Prasad and both co-leads, who previously starred in Rajamouli’s “Yamadonga” and “Magadheera,” respectively.

Set in and around Delhi in 1920, “RRR” pointedly lacks historical context so that Rajamouli and his team can transform a straight-forward rescue mission into a rallying cry for reunification and also cathartic violence. Bheem, the avenging “shepherd” of the Adivasian Gond tribe, visits Delhi to track down Malli (Twinkle Sharma), an innocent pre-teen who’s kidnapped from her Gondian mother by the cartoonishly evil British Governor Scott (Ray Stevenson) and his sadistic wife Cathy (Alison Doody).

Raju, a peerless Colonial police officer, befriends Bheem without realizing that they’re at cross purposes: Bheem wants to break into Scott’s fortress-like quarters to rescue Maali while Raju wants to catch the unknown “tribal” that Scott’s lackey Edward (Edward Sonnenblick) fears might be lurking about. Raju and Bheem immediately bond after they save an unrelated child from being crushed by a runaway train, as clear a sign as any of Rajamouli’s love for Cecil B. DeMille-style melodrama. (“Ben Hur” is an acknowledged influence for Rajamouli, as are the action/period dramas of fellow DeMille-ian Mel Gibson).

It’s also fitting that “RRR” is Rajamouli’s big breakthrough since it's inevitably about Bheem as an inspiring symbol of quasi-traditional, boundary-trampling patriotism. Rajamouli has gotten quite good at incorporating potentially alienating elements, like his cheap-seats love of grisly violence and brash sloganeering, into his propulsive, inventive, and visually assured fight scenes and dance numbers.

Rajamouli has also already perfected the way he works with and uses his actors as part of his shock-and-awe style of melodrama. Rama Rao is ideally cast as the naively sweet-natured Bheem, whose messianic qualities are also effectively high-lit in a handful of rousing set pieces, like when a bare-chested Bheem wrestles a tiger into submission. Rama Rao’s performance isn’t the main thing, but it is the emblematic inspiration that, along with a “Passion of the Christ”-worthy scourging, understandably leads an assembly of Indian nationals to attack Scott and his bloodthirsty hambone wife in a later scene.

Likewise, Charan’s steely-eyed performance in “RRR” is limited, but strong enough to be credibly superhuman. Rajamouli knows exactly how to capture his best sides, as in an astounding opening action scene where Raju descends into a rioting mob just to subdue and apprehend one particular dissident. Rao and Charan’s bro-mantic chemistry and syncopated physicality have already made a viral success of the movie’s splashy “Naatu Naatu” musical number, but that scene’s infectiously joyful presentation is supra-human by design.

The spirit of the individual matters more than any single person in Rajamouli’s movies and “RRR” is a perfect expression of that notion. It’s also a decent reflection of Rajamouli’s fame, which Film Companion South’s Sagar Tetali keenly suggests is “the triumph of directorial ambition over the actor-star—the triumph of a brand of storytelling over the South Indian star image.”

With “RRR,” Rajamouli repeats his preference for one nation under populist ubermenschen. Both Bheem and Raju are extraordinary men because they are, at heart, aspirational expressions of the people’s will. Their lives, their loved ones, and their relationships are all of secondary importance—check out Bollywood star Ajay Devgn’s explosive cameo!—so it makes sense that the cast’s images and performances are also blown up to James Cameron-sized proportions.

Like Cameron, Rajamouli has earned a reputation for pushing the limits of industrialized pop cinema. In that sense, “RRR” feels simultaneously personal and gargantuan in scope. Film Comment’s R. Emmet Sweeney is right to caution viewers regarding the towering streak of “Hindu-centric” Nationalism and characterizations at the heart of Rajamouli’s “Pan-Indian address.” Sweeney is also right to hail Rajamouli’s dazzling “technical innovation.” It’s not every day that a new Indian movie—which are typically not advertised to Western viewers beyond indigenous language speakers, and therefore largely ignored by Western outlets—is presented as an event to American theatergoers. Attend or miss out. 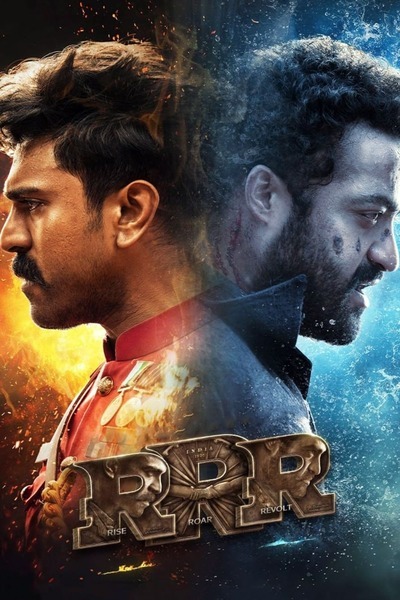