There is a sense in which "Roller Boogie" comes as a refreshing surprise: I didn't think it was still possible, in the dog-eared final days of the 1970s, to have this silly, innocent, lame-brained and naive movie. I'd always thought that when Annette Funicello and Frankie Avalon grew up, that was it.

But, no, the spirit of those American-International beach party movies from the early 1960s still survives. You remember the beach party/blanket/bikini/bongo/bingo/barbecue gang: Annette and Frankie, down on the beach with their surfboards, catching the monster waves and dancing to "Surfin' USA" and planning a big dance down at the local teen hangout . . . until a fascist meanie local real estate speculator announces plans to buy the hangout, tear it down immediately, and put up something real thrilling like, say, a senior citizens' condominium.

Times do change: I can see more virtue in the fascist meanie viewpoint than I could in 1960, and Frankie and Annette, for that matter, are probably putting more money into condos than juke boxes these days.

But the basic art form of the beach party movie apparently never dies. It was first born, indeed, in the days before beach parties and even before bikinis: This basic genre had its first golden era in the MGM classics where Judy Garland and Mickey Rooney would bat around dialog along the lines of. "I've got it!!! Let's rent the old barn and put on a show!!"

Nothing has changed much in all the years since. "Roller Boogie" involves a bunch of kids who hang around on the boardwalk at Venice, Calif., and whose lives are centered around roller skating. Lest you dismiss this as fantasy: I've been to the boardwalk at Venice, and it is, incredibly, very much as it's depicted here. There were never real teenagers like the beach party gang, but there are, God help us, real teenagers like the roller boogie gang, and there are some senses in which "Roller Boogie" is a documentary.

But, anyway, the kids hang around on the boardwalk, as I was saying, and roller skate up and down and listen to Top 40 stations on their transistor headphones. And then we meet a local rich girl (Linda Blair) who lives in one of those Bel Air mansions where the domestic staff runs things while Linda's mother sits around looking painfully bored, and her daddy makes large amounts of money and keeps his daughter in new convertibles.

So. Linda and her friend, a busty brunette who would have looked great in one of Annette's bikinis, hop in the convertible and bop down to the boardwalk and skate up and down, and hang out at the rink, and there are some puppy love romances and some stunt skating and then it turns out that the local fascist real estate meanies, in association with the mob, plan to . . . you guessed it, they're gonna tear down, the rink jut before the big disco roller derby.

What swine. The rink is run by a nice old guy whose name I didn't catch (but I will lay you 3-to-2 it's "Pop"), and the kids all rally around, and Linda Blair runs away to the boardwalk and there is a confrontation at a swank party at her Bel Air mansion, and lots of people in formal clothes get pushed into the swimming pool and there is, inevitably, a disco roller derby after all, looking as if it owes a great deal to "Saturday Night Fever."

The movie, as you have guessed, is not very deep. But I've been thinking: Is it a bad movie, or is it just that my tastes have completely changed since those long-ago days when I could see some residual virtue in Annette and Frankie and the gang? Let's say "Roller Boogie" is no better and no worse than the beach blanket/bikini/bingo/bongo movies, and from there you're going to have to take it by yourself. 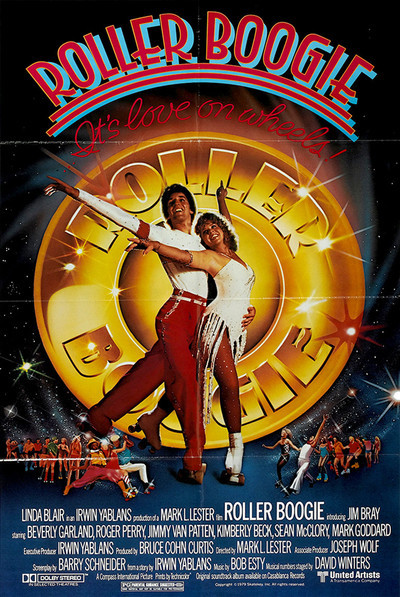