Is “Stand By Me” one of your favorite movies? Well, here’s “Rockaway,” a coming-of-age ditty that wants little more than to be Rob Reiner’s 1986 coming-of-age ditty, offering the same emotional thrills: making men feel like boys again through raw memories of free-flowing cuss words, budding sexuality, and a few brushes with mortality, as little flames of imagination flicker before adulthood snuffs them out. But as it hardly feigns originality on these timeless ideas, “Rockaway” takes an approach that’s arguably grosser than a blueberry pie contest gone to the extreme: it relies on blunt sentimentality and awkwardly, expressly warps its own story inspired by true events to be adoption-ready for “Stand By Me” fans.

Written and directed by debut filmmaker John Budion, "Rockaway" frames itself like “Stand By Me,” with a wiser man looking back on his years as a young white boy. Frankie J. Alvarez plays a man named John, scanning his childhood drawings in his NY apartment and musing in voiceover. “Rockaway” then flashes back a simpler time, the summer of 1994, when his younger self (Maxwell Apple) and his protective older brother Anthony (Keidrich Sellati) would steal tennis balls with the number three on them (the number of John’s favorite New York Knicks player, John Starks), and Anthony would tell him stories about characters that inspire John's illustrative imagination, like the smiling feces Mr. Doo.

Shortly into the tale, John and Anthony befriend another group of boys, two blonde kids named Brian (Tanner Flood) and Billy (Harrison Wittmeyer), a slick and bombastic wannabe hot shot named Sal (Colin Critchley), and the Vern Sessio of the team, James DiGiacomo’s Dom. They get into sporadically amusing hijinks, like gabbing about boobs or playing dirty in a pick-up baseball game against some uppity kids. There’s one girl briefly brought into the mix, Gina (Sophia Rose). In front of the boys, Sal tries to serenade her, only to have Gina shoot down his macho bluster with the rap flow of a machine gun. But "Rockway" leans back into its curdled boys-will-be-boys reminiscing, when it ends the scene with Gina kissing little John on the cheek after seeing what he can draw with chalk on a brick wall, to the complete amazement of his male peers.

But there’s a darker world that waits for the boys whenever they are back home—the brothers have a plot to kill their abusive stepfather (Wass Stevens), who bursts into scenes and directs his own self-loathing about his life direction toward his sons and their mother (Marjan Neshat). This approach is one of the film’s more compelling aspects, looking at how a child would innocently navigate death and abuse. But it’s frustrating when this complex tone feels more and more like something that Budion knows he can get away with because “Stand By Me” did it first, directly recalling that film's dead body and the boys’ comprehension of it among their own adventures.

On its own, “Rockaway” is better when it tries to capture a feel, not an era—it has a nice golden sheen on the boys’ ambling summer days, and brief moments where John’s imagination offers striking moments of comic book fantasy, like when Anthony becomes a fire-starting superhero, or imagines Dom’s punching fists as cement blocks. But along with its rough-around-the-edges filmmaking (a combination of film and sound editing that make playful scenes drag when they should pop), the aspirations to recreate 25 years ago unravel the indie—don’t look too closely at the cars in the background of various scenes, and aside from sneaker pumps and a couple other things, there aren’t many details to make it look specifically like 1994.

Any obviously inspired filmmaker faces a line between a movie expressing fandom and being derivative, and “Rockaway” is impressively shameless in crossing it. Along with the aforementioned references, the characters themselves function with their own wistfulness for “Stand By Me,” comprehending their lives in correlation to Reiner’s film. One of them even says, “John is like Gordy,” and when they talk about the stepfather plot, one advises, “Don’t shoot Ace!” It’s an eye-rolling scene, not a script’s giddy nod but a forceful branding, proving that "Rockaway" isn’t so much nostalgic for the ’90s, or boyhood, as it is the experience of watching someone else’s movie.

“There’s a lot of stuff in ‘The Body’ that’s just simply history that’s been tarted up a little bit.” That was how Stephen King once described the story that became “Stand By Me,” and that attitude about creative nonfiction blares throughout “Rockaway,” its flaws only revealed more by its desired comparison. Even looser scenes need a context of emotional honesty, not just a specific detail that might be derived from real life (like John’s love for Starks, or Mr. Doo, both vivid and relatable). But for a movie that’s largely comprised of scenes with playfulness and bonding, there’s a phoniness that often rots its slickness and/or sentimentality. And I was disturbed by an end credits photo montage, in which the story’s heaviest, most shocking development involving Anthony's fate is revealed to be a complete fabrication. But maybe I shouldn’t have been: with “Rockaway,” you don’t have to know all the details of Budion’s life—or have even seen “Stand By Me”—to get a strong feeling of what’s honest here, and what isn’t. 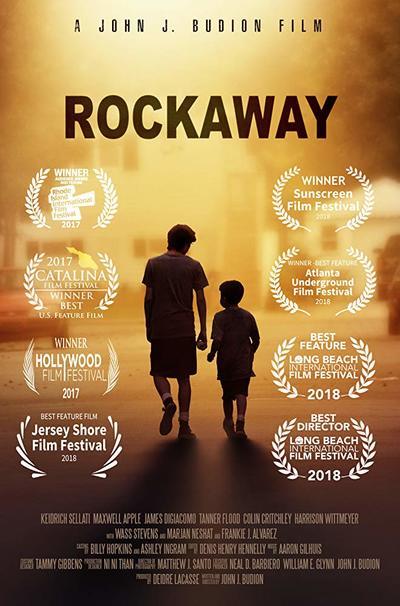