Second only to Charlotte in the world of stories about spiders is the one Robert the Bruce met in a cave (some say a cabin) when he was in retreat from the English in the early 14th century. According to legend, the future King of Scotland was discouraged after repeated defeats, with England willing to deploy its vast resources to keep control over Scotland. And then he saw the spider. She tried to get her silk to attach to the wall and failed. She tried again, failed again. Six times she tried; six times failed. And then, she succeeded, and spun her web. Robert the Bruce thought about his six defeats by the English, and decided that if a spider could try a seventh time, he could, too.

Angus Macfadyen may have identified with that spider, too, as he refused to give up on the idea of a movie about Robert the Bruce, the character he played in the Oscar-winning "Braveheart." He returns again in "Robert the Bruce," which he co-produced and co-wrote, as well as playing the title role. A quarter-century later, (and nearly that much older than the historical figure he plays), this movie is partly a sequel to "Braveheart" and partly an answer to it. In Mel Gibson's version of the fight for Scottish independence, Robert the Bruce is an appeaser, betraying Gibson's William Wallace by fighting alongside the English, but then, after Wallace is tortured and killed in 1305, calling on his memory to inspire the Scots to join him in fighting for independence. This version does not cover any of those incidents, but presents Robert the Bruce as an honorable, heroic man, acting solely on behalf of the independence of the people of Scotland.

"Robert the Bruce" is gorgeously filmed by cinematographer John Garrett, making the most of every exquisitely lit crag of the Scottish countryside. Like NC Wyeth's classic Scottish Chiefs illustrations of Robert the Bruce, there is an almost tactile weight and thickness in every frame, the deep, deep snow, the huge swaths of fur covering the broad shoulders of the men who ride their horses with grandeur of purpose, the heavy cruciform-hilted swords swung by heavy arms. Equally thick are the Scottish burr accents that make some of the dialogue near-unintelligible to the untrained ear.

This movie begins in 1306, shortly after the end of "Braveheart." Robert the Bruce is about to meet with John Comyn (Jared Harris, playing a Scot but with an English accent to indicate his allegiance), who has been designated his co-Guardian. The meeting is at Greyfriars Church, neutral holy ground for an unarmed "parley." Robert has signed over his lands to Comyn in exchange for his promise to support Robert as sole ruler of Scotland. "We must change the legacy left behind by William Wallace," Comyn says. But he is clear he does not trust Robert. "Do not play the saint, not you." He jeers that the one thing Robert wants most he cannot have, to be as brave and as loved as Wallace.

Comyn acknowledges he has not kept his promise either, saying, "You laid a trap for Edward, which he escaped. I laid a trap for you, which you escaped. Tomorrow, you lay a trap for me, which I escape, and so it goes until we are both old men, like our fathers before us." But there will be no escape for Comyn. He has hidden a sword in the church. Robert, who carried no weapon as promised, fights back wielding the church's huge, heavy wooden crucifix.

At least, that's one version of the story. As we see a mother in a remote thatched cottage tell her children, different people tell the story differently. Later, after Robert has sent home his men, telling them to claim they fought on the side of the English, and after his commitment is reaffirmed by watching the spider, his wounded body is healed by that woman and his wounded spirit is healed by her family. Robert has to separate himself from the battle to learn more about who he is and what he is fighting for.

Macfaydyen's Robert the Bruce is a man who thinks more than he speaks. In that opening scene Robert lets Comyn do all the talking until it is time for action. He does not argue or explain or try to persuade, but when it comes time to lead, he knows what to say. There are skirmishes in this film, but it is not a story of massive battles and we do not get to see that final victory for Scottish independence. Instead, this is the story of the man who finally fought not for pride or power, but for the people. 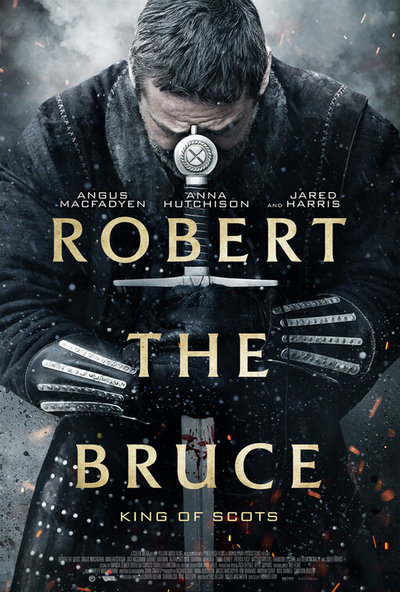 Angus MacFadyen as Robert The Bruce

Patrick Fugit as Will