You can either be sentimental or bitter about the movies, but you can rarely charm people by being both at once. Unfortunately, the people behind the Indian moviemaking comedy “RK/RKAY” took that risk, and wound up making a mawkish, inert fantasy about a filmmaker whose protagonist escapes his movie within the movie. Writer/director Rajat Kapoor stars as both RK, a past-his-prime filmmaker, and Mahboob, a guileless refugee from a 1950s-style melodrama. RK and Mahboob have a few heart-to-hearts and teach each other how to live better ... in theory, at least.

In “RK/RKAY,” Kapoor often seems as tired and bemused as his popsicle protagonists, all of whom have opinions, but none of whom know what to do with them. I really wanted to root for “RK/RKAY”—it’s a real-life labor of love, having been crowdfunded for less than $500,000—but I can’t honestly recommend a movie whose creators’ acknowledged influences include “The Purple Rose of Cairo,” but whose tone-deaf dialogue and blasé filmmaking resemble “Hollywood Ending.”

RK is, like many of Woody Allen’s characters before him, a self-pitying stand-in. His glory days are over and gone, as he’s reminded by a clueless restaurant waiter who, being a fan, offers to freestyle a tribute to RK, but winds up improvising a sad eulogy, accompanied by a woozy non-diegetic trombone on the soundtrack: “You carry a smile on your face, but you are dead inside.” RK’s other creative advisers aren’t much more helpful or kind, offering hot tips like “there is no audience for films these days,” “the hero dies in the end[…] that is not so good,” and “You shouldn't have acted in this movie.” Even the praise that RK receives is worthless: “Your last film, sir, it was real shit. This one is not even that bad.” That line could have been funny in a brighter (or at least more dynamic) context. This is sadly one ding among many, all of which RK takes on the chin.

RK struggles to find some self-respect once Mahboob, his movie’s protagonist, escapes his troubled movie-within-the-movie, and tries to see the world for himself. At this point, RK’s narrative stops being unfortunately quirky and becomes downright exasperating.

Mahboob brings out many of Kapoor’s worst ideas, like when RK tries to report Mahboob as a missing person to the police, but can’t even explain himself without a few pseudo-poetic expressions (“I've written him ... I've given birth to him”). Rather than embody a specific kind of melodramatic character, Mahboob is a goony caricature of naive romanticism. Everybody but RK likes Mahboob—“He thinks he’s real” RK snarks at one point, shortly before calling his creation a “one-dimensional twit”—but he’s never more or less irritating than RK. Just look at the scenes where RK tries to convince Mahboob that he’s a fictional character whose “every word” is “weighed and carved” and whose every action is “predetermined.”

Mahboob tries to defend himself with a folksy witticism: “My father used to say that life is beautiful ...”

But RK cuts him off. “Colorful and vivid. Yeah, we know."

Mahboob looks shocked: “Amazing. You took the words out of my mouth ...”

“No, the words were mine. You took them from me.” This exhausting back-and-forth is “RK/RKAY” in a nutshell.

Kapoor teases viewers with metaphysical questions—particularly about egocentricism and its essential role in making art—but always seems to have a rote, self-deprecating answer. There’s not much room for audience participation in this sort of asked-and-answered narrative, not when Mahboob is always ready with fluffy counter-criticism like, “How do you know for sure that you exist? Maybe you are also a part of somebody's story. Just another character. You have just the words that were given to you.” Again, that line could have been funny, but it’s not, because we’re supposed to like Mahboob, or at least understand why a friend of RK’s wife Seema (Kubbra Sait) tells her that Mahboob “is way better than the [husband] you have.” In order for a story of this type to work, you have to believe in the revivifying power of corny movies. Because while we may not always buy what Mahboob is selling, “he feels” and “he believes” it all, as even RK admits.

But the more “RK/RKAY” asked viewers to clap for Mahboob’s Tinkerbell, the less I felt like doing it. Kapoor’s visual compositions are flat and his scenes don’t have much rhythm, either internally or from scene-to-scene. There’s also a groanworthy pop culture reference or line of dialogue to pre-emptively address every one of the movie’s glaring weaknesses, and most of them are unconvincing. Because it’s a cop-out to hide behind platitudes (“My father used to say: if your heart is unblemished, the world appears pure”) and then ask people to appreciate your intelligence by throwing up a few movie posters—“The Invisible Man” and “La Dolce Vita” are just two of the posters in RK’s editing bay—and other blank cinematic signifiers (mostly movie props and costumes). “RK/RKay” seems to have a lot to say about Kapoor’s complicated cinephilia, but I tend to agree with Mahboob when he explains why he doesn’t want to return to his creator’s movie-within-the-movie: “I lived there, but that life was not real." 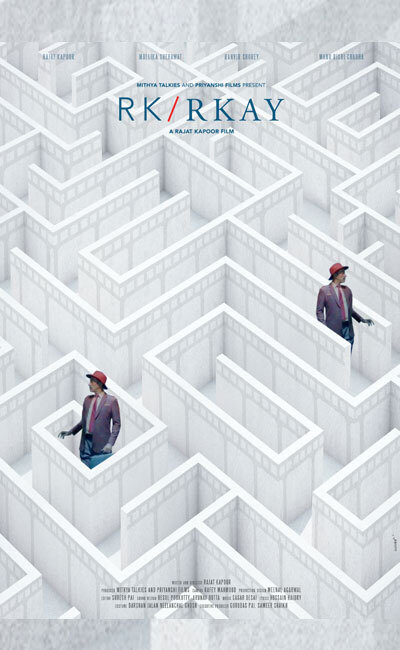