Much like last week’s “How It Ends,” “Ride the Eagle” demonstrates that it is indeed possible to make a feature film under strict COVID-19 protocols, but doesn’t seem to have much of an idea of how to make a good one under those circumstances. “Ride the Eagle” feels like everyone involved was more interested in the logistics of the production than the story that they were telling. The end result is a film that will only spark curiosity because of the circumstances surrounding its existence rather than anything about the story itself, unless there's hunger out there for rehashes of “Garden State.”

Jake Johnson, who co-wrote the screenplay with director Trent O’Donnell, plays Leif, an oddball character who, as the film opens, gets word that his mother, Honey (Susan Sarandon) has recently passed away. The news is not exactly heartbreaking to him—he has been estranged from her since she abandoned him at the age of 12 to join a cult and had rebuffed recent efforts by her to reach out to him. Now she has made one last effort to mend fences with him with the inducement of leaving him her spiffy cabin in Yosemite as his inheritance. However, in tried and true quirky indie movie tradition, there is a catch—he has to go up to the cabin and perform a series of tasks explained to him via a videocassette recorded by Honey before her passing or he gets nothing.

After Leif and his faithful canine companion Nora arrive at the cabin, he finds the cassette and gets to work at the tasks at hand. At first, there's the distinct suspicion on his part (and ours) that Honey is just screwing with him again—one request is to row across a lake and sneak into a house in order to drop off a kiss-off note and another charges him with catching a fish for his dinner using only his bare hands. On the other hand, another request is for him to call “the one that got away” and apologize for his mistakes and this leads him to reestablish contact with former girlfriend Audrey (D’Arcy Carden). It turns out that there are still a few sparks between them, even over the phone, but Audrey is hesitant to do anything about them because she's still reeling from a bad breakup. Some of the additional tasks are more serious in nature and force the admittedly resentful Leif to at long last reconsider both his own life and his troubled relationship with his mother.

The basic problem with “Ride the Eagle” is that none of it is especially interesting. Watching yet another bland guy in the throes of a seemingly endless adolescence, working through his personal issues and coming to terms with things, is just not quite as compelling as it might have been once upon a time and Johnson and O’Donnell (who previously worked together on the long-running sitcom “New Girl”) don’t really bring anything new to the table. The stabs at quirky humor—such as the conceit that Leif ekes out a living by playing bongos in a band—are just a little too forced to be funny. The film is also pretty thin from a dramatic standpoint, and by the time that Leif—Spoiler Alert!—has his big epiphanies in the final stretch, they don’t really demonstrate the kind of emotional power they were clearly meant to have because it is hard to care about any of them.

Johnson, Carden, and Sarandon are all good actors and do as much as they can with the material at hand but they too often seem to be coasting, seemingly more relieved to be able to get out and do something than into making their characters into convincingly three-dimensional people. The only one who does manage to pull this off is J.K. Simmons, who turns up late in the game and breathes some life into the proceedings, but that's almost entirely due to his ability to make practically every scene he plays feel absolutely authentic, no matter what he is working with. I take that back—the dog that plays Nora is also pretty impressive and I am not normally one susceptible to the charms of canine actors. Put it this way—there is one long stretch in the film where Nora takes off on her own and after a while, I found myself wishing that the film had chosen to follow her and leave her less interesting owner behind.

“Ride the Eagle” isn’t terrible, I suppose—it is too blah to inspire that kind of an emotional response. Its biggest crime is that the whole thing, in the end, is just kind of pointless, and doesn’t offer viewers anything that they haven’t already seen before and it's never as amusing or thought-provoking as it would like to be. Although I suppose that some interest can be derived from observing the lengths that it goes to follow COVID protocols (such as including very few scenes featuring more than one character in the same frame at any given time), whatever appeal that might hold quickly dissipates and leaves you with nothing.

Now playing in theaters, and available on demand and on digital platforms. 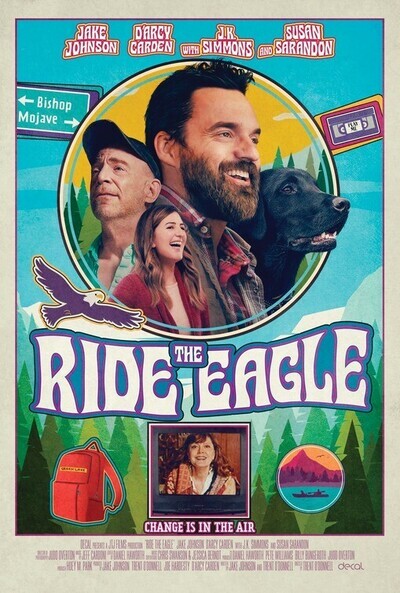