One of the most audacious proposals in all of literature occurs in Shakespeare's "Richard the Third," when the misshapen Richard, who has caused the death of King Henry VI, proposes to his widow, Anne, as she accompanies the corpse of her husband through the streets. Here Shakespeare was collapsing events separated in time, to underscore Richard's evil impudence. Of course in the 15th century royal marriages were more a matter of politics and strategy than of romance, and by the end of the scene Anne is actually considering his proposal.

Now look at a small touch added to the scene by "Richard III," the new film by Richard Loncraine and Ian McKellan. Richard (McKellan) softens up Anne (Kristin Scott Thomas) with flattery, sophistry and lies, and finally offers her a ring, which she accepts. All very well. But in this version, he first removes the ring from his own finger by sticking it in his mouth and lubricating it with saliva, so that as he slips it on her finger she cannot help but feel the spit of her husband's murderer.

That extra measure of repulsive detail scuttles through the entire film, making this "Richard III" not just a seductive telling of Shakespeare's story but also a perversely entertaining one. I've seen it twice, the second time with a large audience that chuckled the way people did during "Silence of the Lambs;" Richard, like Hannibal Lector, is not only a reprehensible man, but a smart one, who is in on the joke. He relishes being a villain; it is his revenge on the world which twisted his body, his face and his smile, and placed him below men who were better shaped to rule and love.

The movie, based on a London stage production which also starred McKellan, advances the action 500 years, to the 1930s, while keeping Shakespeare's words. The first 10 minutes of the film set the stage almost without dialogue, as Richard shoots a rival and then addresses a political rally. When the famous opening lines arrive ("Now is the winter of our discontent"), we slip easily into the language. (More fiendishness: Richard begins his speech in public glory, and then concludes it in private, standing at a urinal, speaking directly to the camera, enlisting us in his scheme.)

The movie is set in the kind of England that might have resulted if Edward VIII, instead of abdicating, had been able to indulge his fascist fantasies, summon Oswald Mosley to lead a government, and lead his people into an accommodation with Hitler. Much of the popular appeal of Nazism grew out of the costumes, settings and architecture of the Hitler cult, and in "Richard III" the men strut in black and red, in leather and tailored wool--their politics an expression of their fetishes. Many of the scenes are placed inside and outside a vast 1930s Art Deco power station, which looks like the set for an Ayn Rand wet dream.

And they smoke constantly. Of course everyone smoked in the 1930s, but the smoking behavior in "Richard III" is particular: Richard's consciousness in many scenes seems to center on his cigarette, which he returns to obsessively, as if through its tube he is inhaling the venom that enables him to carry on. All of the others smoke, too--the women using cigarette holders and gloves to maintain a dainty distance between themselves and the poison they crave.

Richard's progress to the crown is hastened by a steady stream of murders, orchestrated with the aid of a couple of blank-faced hit-men and the advice of the plump, sleek Buckingham (Jim Broadbent), who beams benignly over the slaughter and dreams of being paid off with a country estate. All of the deaths are gruesome, particularly the way Richard's brother, Clarence (Nigel Hawthorne) is dispatched in his bath, and Queen Elizabeth's brother, Rivers (Robert Downey), experiences a most unanticipated form of interruptus.

Annette Bening plays Elizabeth solidly, but without the deftness she brought to a movie like "The American President;" there is the hint that she is too impressed to be in a play by Shakespeare. Maggie Smith is right at home; as Richard's mother, and the grandmother of his victims, she curses him so venomously that even Richard has pause.

The movie is really McKellan's, and with director Loncraine, his co-writer, he comes up with one sly touch after another to make Richard a satisfactory villain. Given an apple to feed to a pig, he throws it at the animal, and nods with quiet satisfaction at its squeal. When a child jumps up playfully and knocks against his hump, he crumbles to the crowd, lets out a beastial snarl, and then clambers to his feet with the oddest little smirk. And in a final scene, done to Al Jolson's "I'm Sittin' on Top of the World," he embraces the hell fire of his destiny.

Last month we saw a traditional adaptation of Shakespeare, "Othello," which was reverent but yet not filling. Now here is that bane of the purists, a modern-dress Shakespeare, which works in the way the play should work. Perhaps that is because the 1930s period and decor match the tone of the play; decadent royalty strutted on the European stage, having a last dance before the Nazi beast pounced. 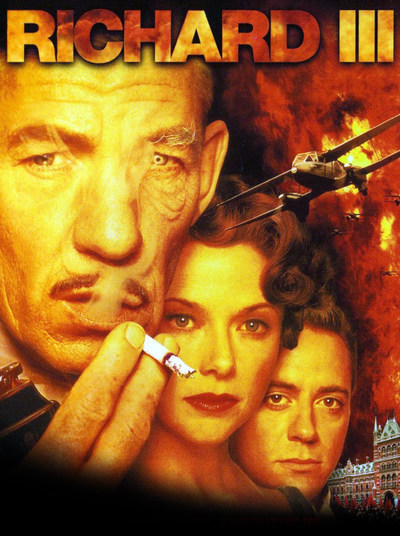 Maggie Smith as Duchess of York