“Revenge” is the film we need right now, from a filmmaker we need right now: French writer/director Coralie Fargeat, who makes her stunning feature debut with a rape-revenge fantasy that’s as brutal as it is thrilling.

Now, you may be thinking to yourself: I really don’t want to watch a gory, graphic movie about a woman being raped and then seeking bloody revenge against her abusers. In the midst of the #MeToo and #TimesUp movements—which have inspired and empowered so many women to discuss the sexual harassment and assault they’ve survived—the idea of exploring this kind of disturbing, emotionally complex territory cinematically might seem like too much to bear. And I get that. To be honest, I was kind of dreading seeing “Revenge” myself, even though it already had earned strong reviews and word of mouth.

Turns out, now is precisely the time for this film. It’s intense and often excruciating to watch, but it’s also extremely satisfying as it allows us to live vicariously through a woman who delivers payback and then some to the men who viewed her as disposable. Fargeat displays a masterful balance of tone and pacing, as well as a super-stylish visual flair and a heightened ear for sound design. “Revenge” is shocking but not gratuitously so; surprisingly, it ends up becoming a feel-good tale of a woman enduring a series of horrific abuses and triumphantly coming into her own at the end.

But one of the most impressive feats of all is the way Fargeat subverts and co-opts the male gaze, turning it into something that’s both playful and fierce. The sexy and scantily clad Matilda Lutz initially looks like an irresistible piece of eye candy, and Fargeat knows you’re thinking that. She toys with your expectations of how a woman who looks like Lutz is normally photographed in a film like this before ultimately celebrating her character for the warrior she becomes.

Lutz goes through a startling transformation over the course of the film as her character draws from unimaginable reservoirs of resilience and ingenuity. “Revenge” must have been an arduous film to make, both physically and emotionally, and she rises to every challenge brilliantly.

When we first see Lutz’s Jen, though, she’s a come-hither vixen, all blonde tresses and big sunglasses, suggestively sucking on a lollipop. She’s sitting in a helicopter (in the back seat, it should be noted) behind her boyfriend, Richard (Kevin Janssens). They’re on their way to a remote getaway: a minimalist, glass-and-stone vacation home in the desert. In her long opening shot, Fargeat allows us to ponder the openness and vastness of this setting with its mesas and mountains in the distance. It’s a place of both isolation and possibility—and, for now, silence.

Richard, we learn quickly, is very wealthy—and very married. Jen is aware of this and doesn’t seem to mind. She’s having too much fun being his plaything in this luxurious world. Sauntering around the house in nothing but panties and a belly-baring T-shirt (emblazoned with the sunny logo “I [Heart] L.A.”), the leggy Jen opens the refrigerator, grabs an apple and takes a bite. (In one of the film’s many examples of obvious symbolism—perhaps its only weakness—Jen leaves the partially eaten apple on the counter, where it will slowly rot as the evening’s events unfold.)

Their reverie is shattered when two scruffy men appear at the sliding glass door with high-powered rifles. They’re Richard’s friends, Stan (Vincent Colombe) and Dimitri (Guillaume Bouchede), and they’ve shown up a day early for a guys’ hunting weekend with him. Their lingering looks and foreboding presence immediately change the film’s tone. They are predators, and they’re licking their chops at the sight of a juicy piece of prey.

But Jen tries to keep it light as the night wears on, drinking with the men poolside and teasing them with suggestive dances. She talks dreamily of moving to Los Angeles but she can’t quite articulate why. She wants to be “noticed just to be noticed,” she says. She’s a sweet young woman and she’s probably been a pleaser her whole life; her routine by the pool is her default setting, her usual means of attracting male attention and approval.

The next morning, though, things turn awkward when Jen awakens and finds that Richard is out running an errand, leaving her alone with these two men she barely knows. Sober in broad daylight, she finds that the small talk dries up quickly and escapes to the bedroom. But Stan follows her, asking: “What is it you don’t like about me?” He feels toyed with and hurt after the flirtation of the previous night, and he makes her feel increasingly uncomfortable.

And then he rapes her—and Fargeat achieves a difficult balance in the way she depicts this violent act. She doesn’t show it to us, but she makes the horror of it clear through camera angles and sound design. Dimitri, meanwhile, not only does nothing to save Jen, he actively leaves the room and turns up the volume on the television to drown out her screams. And when Richard returns, he isn’t exactly her knight in shining armor, riding up in his Range Rover to rescue her.

From here, “Revenge” becomes a heart-pounding and increasingly bloody cat-and-mouse game, with the roles of cat and mouse shifting pretty quickly. The men think they’ve solved their problem and done away with Jen for good, but they could not be more wrong. (And it couldn’t possibly be a coincidence that they all suffer some fatal form of penetration. In one particularly squirm-inducing scene, a character even has to pull a chunk of glass from a gash on the bottom of his foot that resembles a vagina.) The process through which Jen not only survives but gains strength as she hunts down her attackers, one by one, requires a great deal of suspension of disbelief. Fargeat definitely emphasizes the “fantasy” element of the rape-revenge fantasy genre, not only through Jen’s resourcefulness but also with the dreamlike way in which she depicts her journey toward regaining control.

Notice the shift in colors along the way, from girly, candy-coated shades of pink and blue against the harsh desert backdrop to a progressive darkening as Jen emerges reborn and transformed. The hunted becomes the hunter, a process Fargeat reveals through visceral texture and amplified sound. Blood dripping from Jen’s body hits the baking earth (and the freakishly large ants below) with such force, it sounds like gunfire. Working with cinematographer Robrecht Heyvaert, Fargeat has created a high-contrast hellscape, a place filled with equal amounts of danger and discovery. But the terrain changes, too, as “Revenge” reaches its enormously satisfying conclusion, suggesting the possibility of hope.

Lutz gives a powerful physical performance, often acting alone and indicating a massive character arc without many words. By the end, you can imagine Jen fighting alongside Lara Croft, or Ellen Ripley, or Sarah Connor—but she can also manage just fine on her own, thank you very much. 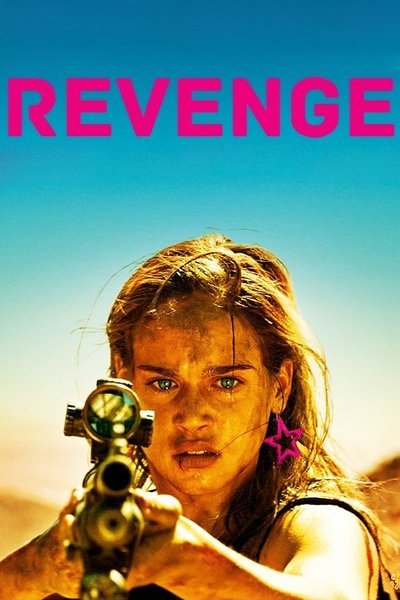