"Retrograde" is about many things, but it's really about the faces. The cameras linger on the faces, allowing the expressions of suffering, tension, nerves, and desperation, to take root. There are a lot of stories here, stories the world knows very well. "Retrograde" details the withdrawal of American forces from Afghanistan in 2021, after a nearly 20-year-long war and/or occupation. "Retrograde" is a deeply mournful film, and the focus on humans is why. Empires march through history and individual humans pay the price. The people of Afghanistan have paid the price over and over again.

The film was shot over the months following the U.S. withdrawal. Director Matthew Heineman and his crew are deeply embedded in the situation, with close access to every private meeting, conversation, and traveling with the Afghan Army in the streets, on the bases, in helicopters, and armored vehicles careening through gunfire. The film starts with the skeleton crew of Green Berets holed up at Camp Shorab in the Helmand Province, understanding their time is coming to an end. None of them want to go. The guys on the ground always have a better idea of what is happening than those back in Washington. These guys have been in Afghanistan for years now, working with the Afghan Army, training them, all in the hopes of holding back the Taliban. There's a closeness between the Green Berets and their Afghan counterparts, but there's also a divide. The power dynamic is unbalanced, and everyone feels it.

The hope for the future rests on the shoulders of one man, Sami Sadat, a commander in the Afghan Army, and considered a hero. He is famous in his country, and his followers are loyal. He also has a huge target on his back. When the American left, he was marked for execution, should he be caught. His family was in danger. After the American withdrawal, he continues the fight, and Heineman is there to witness it: the worried conferences about ammunition, training, cities falling to Taliban control, Kabul threatened, the holdout of Lashkar Gah under imminent threat. Every conversation has an end-game vibe. They are under siege. They cannot hold back the Taliban wave.

Sadat is an authentically compelling figure, similar to Ukraine's president Volodymyr Zelenskyy, whose very existence has been a source of hope and courage to his people. Zelenskyy (just named Time magazine's Person of the Year) understands his symbolic power and incorporates it into his Instagram Live videos, etc. He is a leader. Sadat carries the same weight of symbolic importance on his shoulders. He is the only one organizing his men, the only one with enough authority (emotional and psychological) to urge his men to hang on and remember what they are fighting for. But at a certain point, the fight is over. It will be continued in exile, but this is a tragedy for millions of people. Sadat makes a haunting comment: "I left my soul there. I am walking in an empty vessel."

"Retrograde" is an official military term for the processes involved in moving a base, withdrawing from a territory, for out-and-out retreats. The official language describes retrograde as an "organized movement away from the enemy" and that's what Heineman captures, in haunting sequences showing the Special Forces unit burning print-outs and maps, removing computers, reducing their presence to nil, leaving nothing behind. (Here's an interesting article about the magnitude of the retrograde operation in Afghanistan.) Retrograde, of course, has symbolic astrological connotations, hard to avoid when witnessing the sheer chaos and panic erupting when the Americans begin the retrograde operation.

The scenes at Kabul Airport made the front pages of newspapers around the world. The footage in the documentary is terrifying and heart-rending. H. Scott Salinas' score is mournful, elegiac, and—it goes without saying—tremendously sad. When paired up with the faces of women, men, and children, where nerves and despair are almost on the surface of the skin, the full weight of the catastrophe unfolding is felt. Heineman shot the film, along with Timothy Grucza and Olivier Sarbil, and the access they achieved is extraordinary (including chilling footage of a triumphant mass meeting of the Taliban in Kabul). This is a complicated subject and highly divisive. Heineman doesn't lecture. He focuses on people, on Sadat, on his Green Beret colleagues, on Sadat's men, many of whom just stare at Sadat, helpless, looking to him to see what they should do next. There's a moment where Sadat and his men are holed up in a compound, the air filled with the sound of gunfire, the Taliban literally right over there, and one soldier, his eyes huge and gleaming, says, "The situation is getting worse. What do we do?" There really is no answer.

"Were you even born when this war started?" a Green Beret jokes to a young Afghan soldier. The soldier laughs. It's a joke because the stakes are high, and the situation is absurd and desperate. The Green Beret is speaking the obvious and has been working alongside the Afghans for years. The intimacy between the men is one of the most striking things about "Retrograde." Considering the failed attempts empires have made over the centuries to "subdue" Afghanistan, the way this has all played out is not unexpected. But it's hard to avoid the implications, and the downfall is nonetheless tragic.

The film closes on a long lingering shot of a woman, pressed up against a chain-link fence, staring at the American soldiers, with a wordless sense of loss, terror, and hypervigilance shimmering across her face. Link together every lingering closeup of a face—either an Afghan face or an American/Australian/British face—and the entire tragedy is there. You wouldn't even need dialogue. 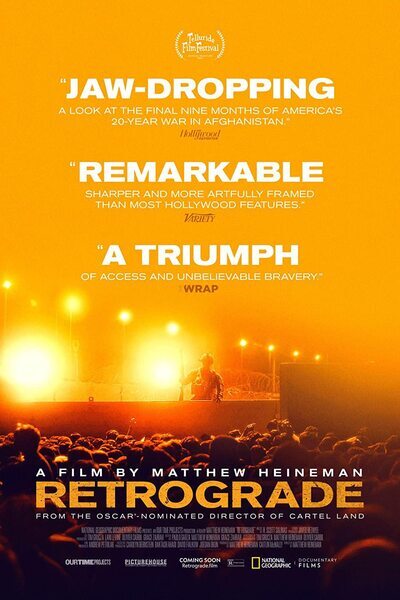 Sammi Sadat as Himself