Like an all-inclusive vacation package, you basically know what’s in store for a romantic comedy like “Resort to Love.” A cutesy storyline, some endearing performances, a few laughs, and by the credits’ roll, a whole lotta love. Some vacationers and viewers may find comfort in the predictability and safety in this routine. It’s the kind of format that won’t let them down or jolt them out of the ordinary. Others may find this regimen lacks any sort of thrill or surprises, missing that kind of spontaneity that’s only found in the unknown and unplanned.

Director Steven K. Tsuchida’s “Resort to Love” finds its heroine Erica (Christina Milian) at a rough time in her life. Still reeling from the break-up of her engagement, she sticks around in New York City to try to launch her music career—only to watch her hopes dashed when her collaboration with a popular tempestuous male artist (think Kanye West on a bad day) destroys their collaboration onstage at a listening party. Erica’s best friend intervenes to break her out of her funk after back-to-back personal and professional setbacks, and finds her a gig as a singer for a lush Caribbean resort. Still working through her feelings, Erica runs into the man she least wanted to meet: her ex, Jason (Jay Pharoah), and his new bride-to-be. Of course, the encounter brings up leftover feelings for both Erica and Jason, but things get complicated when Jason’s dashing brother Caleb (Sinqua Walls) also shows an interest in Erica and Jason’s fiancé insists on including Erica in her wedding party without knowing her history with Jason.

Writers Tabi McCartney and Dana Schmalenberg play up the “will they or won’t they” tension between Erica and Jason, giving “Resort to Love” a dash of needed suspense. Everything else in the storyline feels pretty familiar, channeling the vacation do-over classic “How Stella Got Her Groove Back” but with a rom-com twist of rediscovering feelings for an ex and a few tropes like the catastrophic mother-in-law-to-be who threatens to derail everything. Other supporting characters feel slightly more hit-and-miss, like Erica’s French boss with overblown mannerisms (a miss) or Jason’s best friend who realizes things after everyone else yet still has his moments of wisdom (closer to a hit). The uneven performances between actors playing for laughs and those playing for the heart never seem to balance out, and it feels like there’s a subtle tug-of-war between the factions for the spotlight.

As Erica, singer Christina Milian’s performance lands somewhere between the two camps of exaggerated and sincere. Her early emotional scenes tend to skew more towards public meltdowns but then she shifts towards more pragmatic down-to-earth moments. It’s a slow but gradual progression. You can even see her character’s confidence wax and wane on-stage when Milian’s singing through several stages of the story, echoing her character’s arc through break-up staples and romantic wedding songs. Her love interests sit on either opposite sides of that exaggerated and sincere spectrum. Jay Pharoah is doing his Jay Pharoah thing; think big theatrical-sized expressions with his face and voice, the kind that made him a stand-out on “Saturday Night Live.” Sinqua Walls, however, brings a much more mellow cool to his scenes, bringing Erica back down to earth when frazzled or neutralizing his mother’s attempts to upstage her son’s wedding with a steady voice and steadfast presence in the face of chaos. Even with just these typed descriptions, you can see where this story is headed because one option is made so much more appealing than the other.

Tsuchida’s visual direction and Greg Gardiner’s cinematography seem to have a bit less fun with the premise of “Resort to Love” than its cast. The movie has the bland aesthetic of a cookie cutter movie, complete with lifeless drone shots and filler montages. Some of the movie looks like it’s lit within an inch of its life, giving it a kind of TV movie look. A few shots appear so green screened, it’s as if our stars were posing for cheesy vacation photos on a cruise. “Resort to Love” offers a cute love story starring attractive leads, but it has the look and feel of a vacation on a budget. At least the movie features a few solid performances to make it a worthwhile diversion for some viewers. Others less inclined to easily resolved romances may want to book some other excursion. 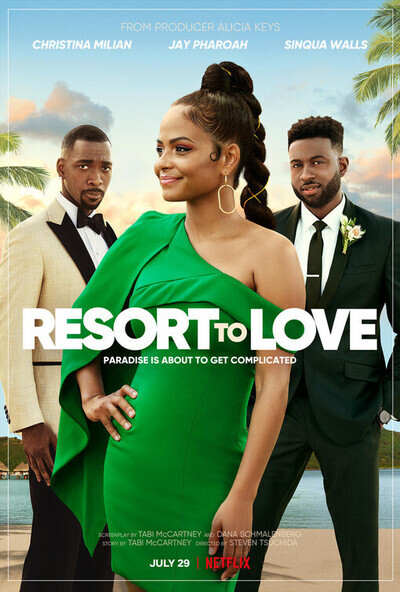