"Reincarnated" opens with a huge puff of marijuana smoke, an appropriate image for a documentary starring the artist formerly known as Snoop Dogg. The newly christened Snoop Lion appeared on HBO's "Real Time With Bill Maher" a few weeks ago, and throughout his segment, Maher kept smelling his guest. You can bet your last money that Snoop didn't smell like April Fresh Downy.

Somewhere between inhales, Maher told Snoop "you smoke too much weed in this movie!" Snoop agreed, and boy, he was not kidding. If the MPAA were remotely creative, their rating description for "Reincarnated" would be "Rated R for rampant reefer, pervasive pot, some shizznit and constant kutchie passing." This is the first movie that would benefit from being released in Smell-O-Vision.

"Reincarnated" has a built-in audience, most of whom will watch it while partaking in Snoop's favorite lung filler. They will find much to enjoy here, 80 percent of which will be due to the fact they're high as hell. But if you're a sober fan of Snoop Dogg's rap songs, as I am, you're in trouble. "Reincarnated" comes not to praise Snoop Doggy Dogg but to bury him, documenting Calvin Broadus' tossing of the Snoop Dogg moniker and the rap career that came with it.

After deciding he wants to make a reggae album full of positive messages, Snoop travels to Kingston, Jamaica, to immerse himself in Rastafarian culture. While exploring places like Trench Town, where Bob Marley and his cohorts grew up, Snoop talks about his early years in Long Beach, Calif., and how his environment produced "Murder Was The Case," while Marley's beget "Concrete Jungle." The goal of Snoop Lion is to offset Snoop Dogg's "negative rap" with "positive reggae."

In an early scene, Snoop meets with reggae legend Bunny Wailer, one of the original members of Bob Marley's group. Wailer smokes with Snoop and rechristens him "Snoop Lion." The lion is a powerful, respected symbol, and the dog is not. This is a compliment of the highest order, so it becomes a permanent moniker. Snoop asks Wailer to sing on his album, and when Wailer does, his excellent singing contrasts strongly with Snoop's attempts.

It's not that Snoop is a terrible singer; there's a great moment in the film where he does a nicely sung impromptu jam with some awestruck kid musicians laying down a wicked, live reggae groove. It's just the snippets of the vocals he presents are overprocessed with Auto-Tune and other aggravating holdover devices from rap. Wailer's vocal is free of these tricks, and more powerful for it.

To create the "Reincarnated" album, Snoop hires producer Diplo and songwriter Angela Hunte. He meets reggae singer Cutty Corn on the block where Peter Tosh used to live, and when Corn sings him an original composition, Snoop asks if he can record the song with him. Corn brings the "struggle part" to the "Reincarnated" album's mission statement of "songs of peace, love and the struggle." Snoop also records with his own daughter, who sings a catchy hook that he wrote for her. (Thankfully, she's not T-Pained into oblivion by the producers.) Songs like "No Guns Allowed" deliver Snoop Lion's new message, and while "Reincarnated" includes recording session scenes, we're deprived of full versions of any of the songs.

As expected from his rap output, Snoop is a good storyteller with a spoken voice I never tire of hearing. To compare and contrast the Snoop Lion persona, he talks about his previous life as "Snoop Dogg." This life included robbery, gangs, gunfire, murder trials and the funeral of friend and singer of numerous rap hooks, Nate Dogg. Nate Dogg died of a stroke way too early at 41, and as a fan, I was moved by Snoop's account of their friendship and collaboration. Snoop also speaks of his upbringing and his time at Death Row Records. Death Row's founder, Suge Knight, gets mentioned doing something nobody else had ever done in the L.A. area, and no, it's not an act of violence.

"Reincarnated" shines when it focuses on comparisons between the birthplaces of the two sides of Calvin Broadus. The kids who play instruments for Snoop Lion are from a school for troubled boys run by Sister Shirley Chung. As rewards for good behavior, the boys are taught to play musical instruments. "Had something like this been in Long Beach," Snoop tells Sister Shirley, "I would have been here instead of the street."

Another scene compares the block Peter Tosh and Bob Marley lived on with Snoop's old 'hood. Both blocks' residents are intensely proud of their location, and Snoop tells the Jamaican residents he understands the concept of neighborhood pride. When someone from another block confronts Snoop regarding a perceived disrespect, Snoop quickly and easily deflates the situation. Things might not have been so quick and easy in Long Beach.

Unfortunately, these moments of reflection and comparison are few. "Reincarnated" seems more interested in showing us countless scenes of people smoking herb than in giving us details about the making of the album it purports to be documenting. Granted, Snoop is immersing himself in a culture where this is a customary process, but it gets old and tired very quickly. A ceremony scene involving the Rastafarian equivalent of baptism fascinated me, but "Reincarnated" neither explains it nor shows it in full. In the ritual, Snoop is officially christened and renamed "the light."

I saw this film at the Toronto Film Festival, and after the 20,000th shot of somebody leisurely toking, I thought to myself, "I could have seen this for free at my 'boy's house in Jersey City. And in Odorama." Watching "Reincarnated" again for this review, I still found sitting through it to be a chore. It clearly caters to the smokers in the audience. Other folks will most likely be as disappointed as I was. If you're in the former category, please don't let me dissuade you from buying a ticket. Like the man says: Smoke 'em if you got 'em. 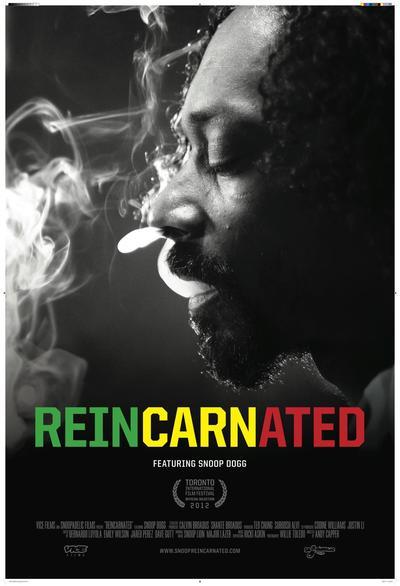 Angela Hunte as Herself

Dr. Dre as Himself

Bunny Wailer as Himself

Cutty Corn as Himself