In the final credits for "RBG," a documentary about Supreme Court Justice Ruth Bader Ginsburg, "Meme Creators" get the longest credit roll, with an apology following: "We were unable to identify every artist." The unlikely transformation of the 85-year-old centrist judge, well-known most recently for her dissenting opinions, into a Tumblr-era Meme-generating juggernaut is the subject of "RBG," co-directed by Julie Cohen and Betsy West. The documentary never digs deeper than a superficial fangirl-style, akin to the young women waiting to hear Ginsburg speak, wearing Ginsburg T-shirts, holding Ginsburg mugs. This is not to dismiss the memes, or the chord Ginsburg clearly strikes in people. Seeing her working out with her trainer, wearing a T-shirt emblazoned with the words "Super Diva," goes a long way towards explaining Ginsburg's current-day appeal. Her fans refer to her as the "Notorious R.B.G." (also the title of a book about her, co-authored by Irin Carmon and Shana Knizhnik), a reference to the legendary rapper "The Notorious B.I.G." (Ginsburg jokes in an interview that they have a lot in common. They both come from Brooklyn.) Through Ginsburg's interesting history you can track the eddies of the women's movement in the United States: her level-headed fight for legal equality (for women and men), her staunch position on an increasingly conservative court. It helps that the filmmakers have pretty much unfettered access to Ginsburg, who is interviewed, along with her children, her granddaughter, her best friends. But Cohen and West's approach is so adulatory that the documentary becomes a surface-level work of hagiography.

Starting with a chorus of various right-wing figures calling Ginsburg overheated terms like "witch," "very wicked," "zombie," "RBG" then takes us on a tour through Ginsburg's life, leaping around in time, the momentum anchored by repeat visits to specific events: her 1993 confirmation hearing for the Senate Judiciary Committee, recent interviews at Harvard Law School or the Virginia Military Institute, all of which help fill in the blanks of her lengthy career, as a lawyer working on women's rights issues to her eventual nomination to the highest court in the land. Notched in between all of this information are the personal details: her love of opera, her friendship with recently-deceased fellow justice, her polar opposite, Antonin Scalia, the diverse collars she wears to court, her lengthy marriage to Martin D. Ginsburg, and how she can't cook (multiple references to this. Who cares?). Once we reach the present day, the memes take over, showing how Ginsburg has captured the hearts of a younger generation. It's heartening to see a class full of high school students listening to Ginsburg's every word during a visit to their class. We need a continuum with the past. Ginsburg helps create a bridge with those who came before.

Her accomplishments are daunting, especially when you consider the era in which she decided to go to law school, even more so when you consider she also had a baby at home. Her husband, "Marty," was by all accounts a well-liked and gregarious man, and not threatened by his wife's ambitions. Gloria Steinem refers to her as a "superhero," but Ginsburg didn't spend the 1970s walking in protest marches, holding up signs. Instead, she went about trying to establish legal precedent for gender equality. She did so in a couple of groundbreaking cases, the first of which—Frontiero v. Richardson—was her first case before the Supreme Court. "RBG" profiles those early cases, where Ginsburg took the opportunity in her arguments not only to plead for her client, but also to teach the existing Supreme Court justices that inequality is real, and why it was wrong to treat women as second-class citizens. In one of her arguments, she quoted Sarah Grimké, 19th century abolitionist and attorney: "I ask no favors for my sex. I surrender not our claim to equality. All I ask of our brethren is, that they will take their feet from off our necks." (In a nice touch, present-day Ginsburg recites Grimké's words from memory.) The Supreme Court listened. Ginsburg won 5 out of 6 of her cases. These sequences feature shots of the imposing courtroom, with Ginsburg's quiet yet firm voice making her arguments on voiceover. The information may be interesting, but it's a repetitive and unimaginative approach.

Once the present-day meme explosion occurs, the filmmakers are on firmer ground, creating quick-cutting montages indistinguishable from any amateur YouTube video. Here's a montage of "Notorious RBG" T-shirts. Here's a montage of memes (Ginsburg's head superimposed on Wonder Woman, etc.). Hip-hop music blasts. Kate McKinnon gyrates in her "Saturday Night Live" spoof on Ginsburg, guzzling energy-drink powder straight from the packet. Each one of Ginsburg's opinions generates another round of memes. It is Ginsburg against a wave of reactionaries.

While this is undoubtedly true, it's not the whole story. What about talking to those who disagree with Ginsburg? (Not those who refer to her as a "zombie" because we don't need any more discourse on such a low level.) But what about giving space to those who have valid issues with some of her opinions? Mightn't it be interesting to delve into the complexity of the law, its compromises, its messiness? Mightn't that provide a fuller portrait? The closest we get is a brief sequence dealing with her controversial 2016 comments about then-Presidential candidate Donald Trump, a serious break with the tradition of Supreme Court Justices maintaining poker faces, regardless of who is in power. One of the regular interview subjects is Senator Orrin Hatch, who may disagree with her politics but also admires her, expressing no doubt that she belongs on the Supreme Court. In the film, his is a measured presence, exuding an acceptance of disagreement and the need for compromise. His comments come from an earlier, more civilized world. Ginsburg is now queen of the dissenting opinion, but unfortunately the filmmakers stay far, far away from any "dissenting opinions" themselves. 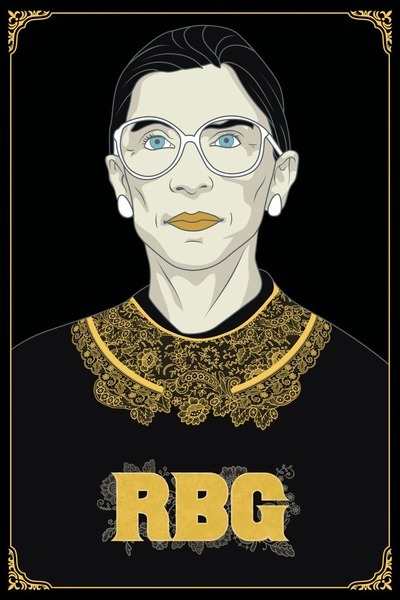